Whittaker Explains What His Biggest Mistake Was In Adesanya Loss
published on February 3, 2022
curated and posted by BRWLRZ Team

UFC middleweight contender Robert Whittaker has revealed what he believes was the biggest mistake he made against Israel Adesanya at UFC 243.

Midway through 2019, Whittaker held the 185-pound gold and hadn’t been beaten since a loss to Stephen Thompson in 2014. In his nine-fight win streak, “The Reaper” defeated the likes of Brad Tavares, Uriah Hall, Derek Brunson, and Ronaldo Souza; won the interim title against Yoel Romero, after which he was promoted to undisputed king; and defeated the Cuban powerhouse for the second time.

Adesanya, meanwhile, defeated Brunson, Tavares, Marvin Vettori, and Anderson Silva on his way to an interim title shot earlier in the year. In a Fight of the Year contender, he defeated Kelvin Gastelum, setting up a unification showdown with Whittaker at UFC 243.

In phenomenal fashion, “The Last Stylebender” dominated the short-lived contest. After knocking his foe down at the end of round one, Adesanya secured his place on the middleweight throne with a second-round knockout inside Melbourne, Australia’s Marvel Stadium.

Whittaker: I Was Too Reckless

Given Whittaker’s prior performances, the way in which Adesanya was able to dispatch him came as quite a shock. But following a break from the sport, the New Zealand-born Australian returned with a vengeance.

Having comfortably defeated Darren Till, Jared Cannonier, and Gastelum on the scorecards since losing his title, three of the best performances of his career, Whittaker has earned his shot at redemption. And he believes he’s rectified the mistakes that led to his downfall in October 2019.

During a recent interview with MMA Junkie’s Farah Hannoun, Whittaker was asked whether he’s identified the greatest error he made against Adesanya. Aside from getting hit very hard in the face, “The Reaper” named his reckless attitude in the Octagon as the leading cause for his loss.

“Getting hit in the face [LAUGHS]. Definitely that one. Probably my recklessness,” said Whittaker. “I was recklessly charging in, I was falling into every one of his baits, every one of his traps, and just, you know, stubbornly just trying to press forward, press the attack, and rip his head off. That’s what was going through my head, and yeah, it didn’t work.

“That’s not how I usually fight. You don’t see me fight like that in a lot of other fights,” added Whittaker. “So I have addressed it, I’ve reflected on it, and we’re gonna try and get in there and do something different this next time.”

Whittaker will have the chance to prove he’s eliminated the mistakes from his game when he steps inside the Octagon with Adesanya for the second time. The pair are set to headline Houston’s UFC 271 pay-per-view on February 12.

Do you think Robert Whittaker has what it takes to hand Israel Adesanya his first middleweight loss? 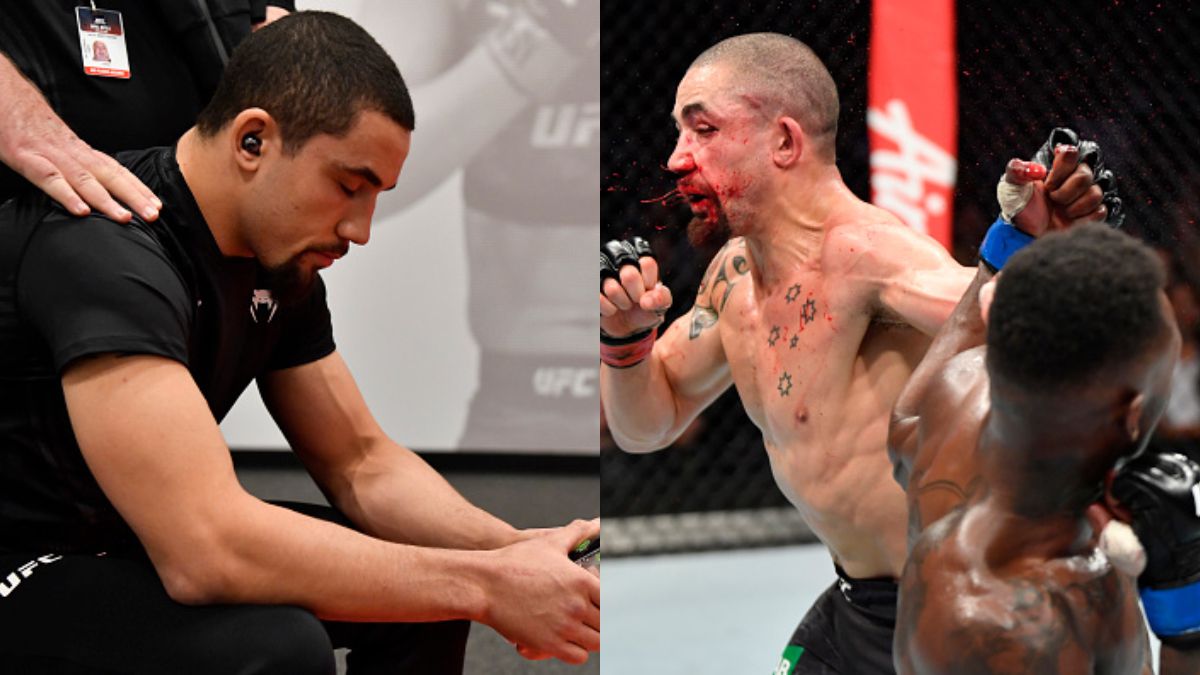