Dana White is still not open to ever doing business with Jake Paul, but he does have quite a different proposal for his nemesis.

If there were a “Rivalry of the Year” MMA award, you’d be remiss not to add Jake Paul vs. Dana White to the nominations list. There may not be a chance of the two ever fighting one another (although Paul has said that may change someday), but the two have traded shots at one another for the better part of 2021.

Most recently, after Paul knocked out former welterweight champion Tyron Woodley earlier this month, he gloated about embarrassing the entire UFC. He then reiterated his interest in fighting UFC stars, such as Nate Diaz and Jorge Masvidal. In Masvidal’s case, “Gamebred” expressed optimism that the right financial incentive from Paul’s camp could sway White’s mind.

Speaking in an appearance on “The FIGHT with Teddy Atlas,” White again shot that possibility down with extreme prejudice (h/t MMA Junkie).

“No (scenario I’d let Diaz or Masvidal box Paul while under UFC contract),” White said. “You notice how he wants to fight f*cking everybody that’s not in his weight class, guys that are older and all this bullsh*t. Go fight a boxer. Go hump somebody else’s leg, you goofball.”

With a fight against a UFC-contracted fighter still out of the question, Dana White would then throw out a counterproposal to the YouTuber. Paul, known to conceive of creative bets and proposals of his own, was now on the receiving end of a rather unexpected offer from the UFC boss.

White is not the first person to throw suspension in Paul’s direction regarding steroid usage. Previous opponent Tyron Woodley also suggested that Paul was entering their initial August fight as a tainted athlete. Additionally, John Fury claimed that Paul had avoided being drug tested ahead of the originally planned bout between Paul and Tommy Fury.

As for the cokehead claim, Paul has repeatedly thrown that barb out at White, even going so far as dressing up as a coked-out Dana White for Halloween.

Thus far, Paul has always responded to every mention of his name by Dana White, so we shall see if this time is any different. Should he offer a response to White’s proposal, you can be sure that we will bring you the dirt right here at MMANews.com.

How do you predict Jake Paul will respond to this proposal from Dana White? 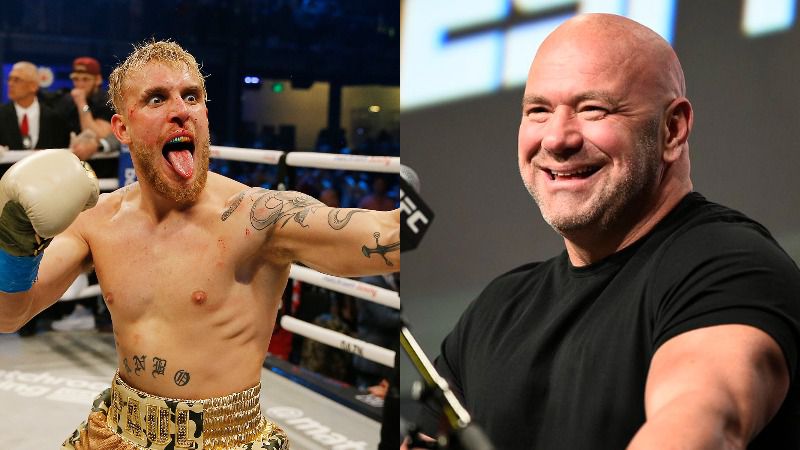