White Says Peña Promised Him She’d Be Champion Before Her UFC Signing
published on December 31, 2021
curated and posted by BRWLRZ Team

After just over seven years in the world’s premier MMA organization, Peña secured her first title shot this year. But when that opportunity is against Amanda Nunes, the outcome usually seems set in stone. After all, the “Lioness” had reigned over two divisions for years, was undefeated since 2014, and had fought off the challenges of names like Ronda Rousey, Valentina Shevchenko, and Holly Holm.

While most expected her name to be added to the list of the Brazilian’s fallen foes, “The Venezuelan Vixen” knew something most didn’t. Entering the contest with a confident aura not many associate with an opponent of Nunes, Peña shocked the world by executing her game plan to perfection, hurting and tiring the consensus female GOAT on the feet before submitting her on the ground in the second round.

Following the incredible result, which is largely being seen as the greatest upset in UFC history, Dana White has consistently praised the new titleholder and provided a further glimpse into Peña’s immense confidence and self-belief, something many branded as delusional prior to UFC 269.

During the post-fight press conference for the final pay-per-view of the year, White detailed the first time he met the 32-year-old Washington native. According to the UFC President, the champ predicted her future success then and there.

“I had my kids in some jiu-jitsu tournament when they were little. And the first time I ever met Julianna Peña, she walked up to me, and introduced herself and told me who she was. And she said, ‘I’m gonna fight for you someday and I’m gonna be a world champion’—when I met her. So she’s always been like that. And yeah, she did it, man. She did it—in spectacular fashion.”

During her own appearance at the post-fight presser, Peña gave her recount of the meeting. Whilst confirming that she did make the UFC kingpin a promise, “The Venezuelan Vixen” said she told White she would win The Ultimate Fighter.

Having proven herself right shortly after with victory in season 18 of TUF, she’s now also fulfilled the promise White believes she made in the same meeting with her title crowning earlier this month.

“Yeah, so it was about 2013. Dana had recently allowed women to fight inside the UFC and that they were gonna have their very first Ultimate Fighter house. So I came down early to help actually Miesha get ready to train for Cat Zingano. And there were the tryouts for The Ultimate Fighter. And I caught, again, heard a rumor that he was gonna be at Syndicate gym. So I took a taxi, I went to Syndicate, and I saw him in the corner, and I walked right up to him and I said, ‘My name is Julianna Peña, and I’m gonna win The Ultimate Fighter.’ And he was like, [CHUCKLES] ‘Alright.’

Having secured the bantamweight throne, the next step for Peña will be to further legitimize her place atop the mountain and prove her dominance over Nunes through a rematch in 2022.

With White confirming the option of an immediate chance at redemption for the Brazilian, and the former champ expressing her intent to regain the belt, it seems likely we’ll see the two rivals face-to-face again next year.

Do you expect Julianna Peña to remain on the bantamweight throne throughout 2022? 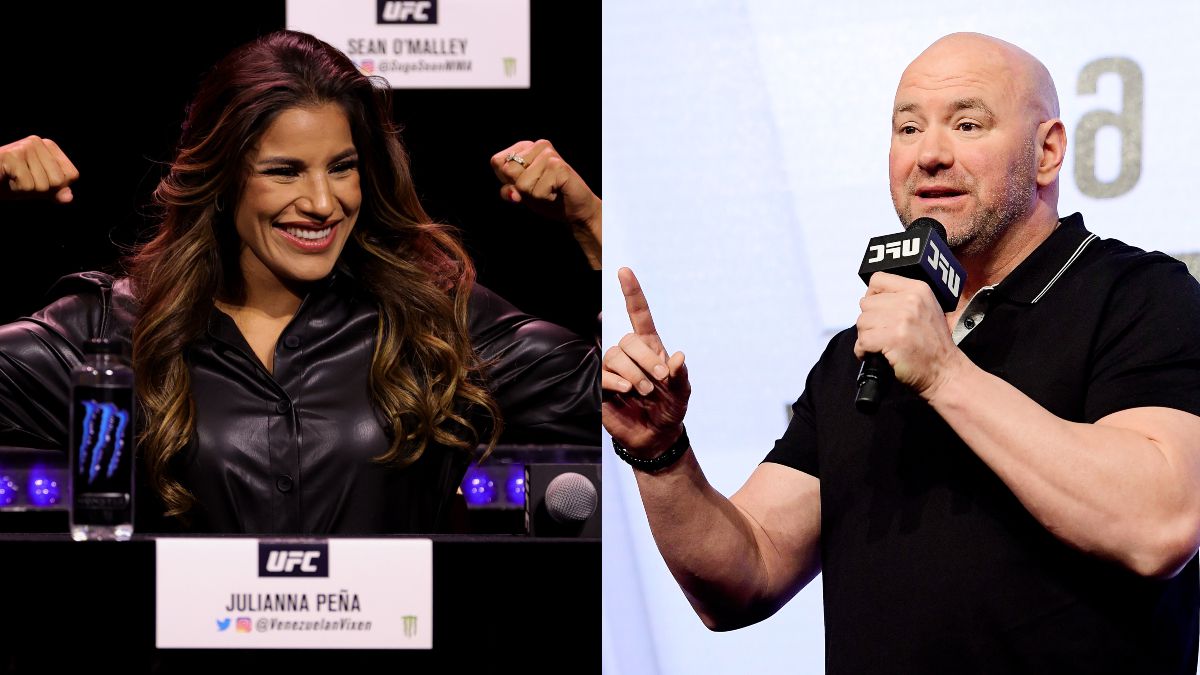