Volkanovski: McGregor’s Team Knows I’m Not A Smart Fight For Him
published on November 20, 2021
curated and posted by BRWLRZ Team

Despite suggesting he’d be willing to fight Conor McGregor, UFC Featherweight Champion Alexander Volkanovski believes the Irishman’s team knows it’s not a “smart fight” for him.

Volkanovski’s stock as a dominant champion rose exponentially at UFC 266. Against top contender Brian Ortega, the Australian performed incredibly in the event’s headlining fight. The pair’s clash came after a previously postponed meeting at UFC 260, as well as a season as coaches on this year’s return of The Ultimate Fighter.

After some more heat was added to their feud, the two elite 145-pound stars finally collided at the September pay-per-view. Showing his perseverance, “The great” escaped from two tight submissions in the third round. He followed that up with some brutal ground-and-pound and a remarkable display of conditioning in the championship rounds. With a unanimous decision triumph, Volkanovski recorded his second title defense.

Having previously dethroned Max Holloway and immediately defended his gold against the Hawaiian, Volkanovski has firmly established himself as the top dog at featherweight. After his recent success, the champion expressed his desire to remain active and further establish himself as one of the greatest 145lbers to have competed in the UFC.

With a clash against social media rival Henry Cejudo not looking particularly likely at the moment, it appears the Aussie will be waiting for a trilogy fight against Max Holloway. Should he secure a shut-out trilogy win over “Blessed,” many have suggested Volkanovski’s path to greatness could go through former featherweight kingpin Conor McGregor.

The Irishman was vocal in the aftermath of the champ’s UFC 266 victory, claiming he’d “kick” Volkanovski’s head off like it was “a rugby ball.” In an interview with ESPN MMA, the 33-year-old suggested he’d be more than willing to meet the former two-division UFC champion inside the Octagon. However, “The Great” believes McGregor’s team is well aware of the threat he poses.

“100% I would (like to fight McGregor). You know, on my end, all green lights on my end, no dramas. But then you’ve got to look at what the UFC wants to do. Then you’ve got to look at Conor’s team looking at that fight and being like, you know obviously, I’m no mug. You can’t just expect to just go and take me out early, and that is your only chance. If you do not get me out in the first round or even in the first couple of minutes, it’s going downhill very fast for him and they know that. They know, especially with me, with the smart strategy and all that, it’s not a smart fight for him.”

Volkanovski added that he sees McGregor’s decision to tweet about him as a compliment. In his mind, the controversial Irishman’s interest proves people are talking about him and the hype surrounding his featherweight reign is as high as ever.

Conor McGregor holds his leg after suffering an injury against Dustin Poirier at UFC 264. (PHOTO: Gary A. Vasquez-USA TODAY Sports)

While Volkanovski remains on the lookout for the next challenge to his throne, McGregor is on the road to recovering from a leg injury. In his last appearance, a trilogy fight with Dustin Poirier at UFC 264, “The Notorious” suffered a gruesome broken leg towards the end of the first round.

Would you like to see Alexander Volkanovski and Conor McGregor fight down the line? 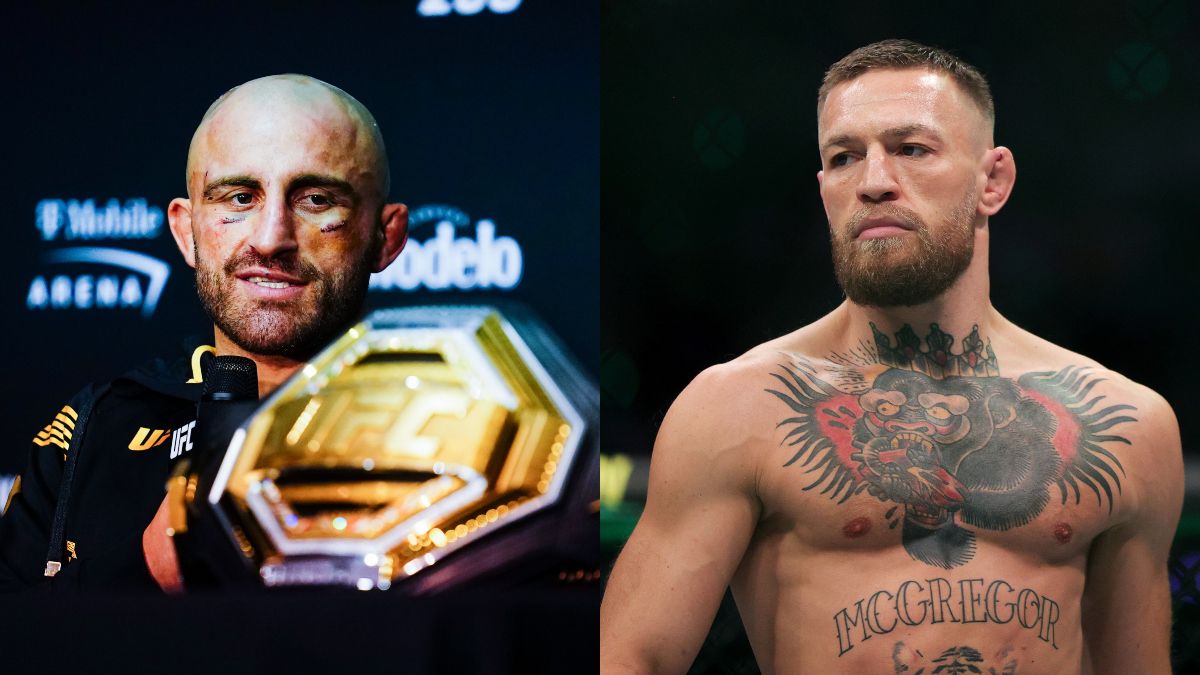