Upset Of The Year – LowKickMMA 2022 Awards
published on December 26, 2022
curated and posted by BRWLRZ Team 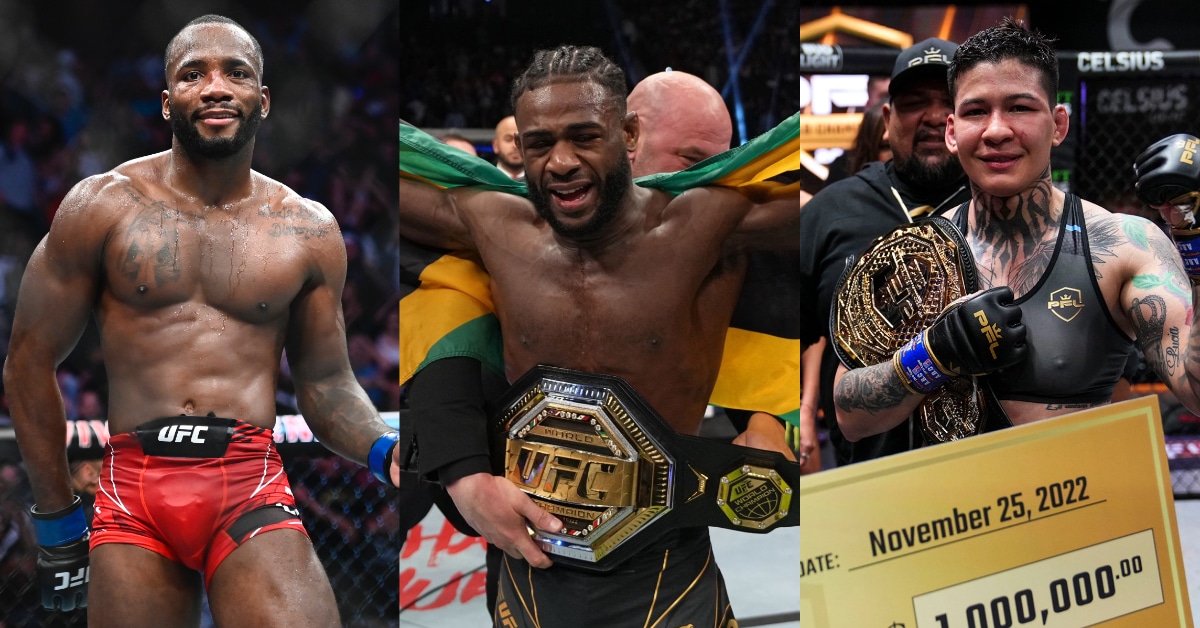 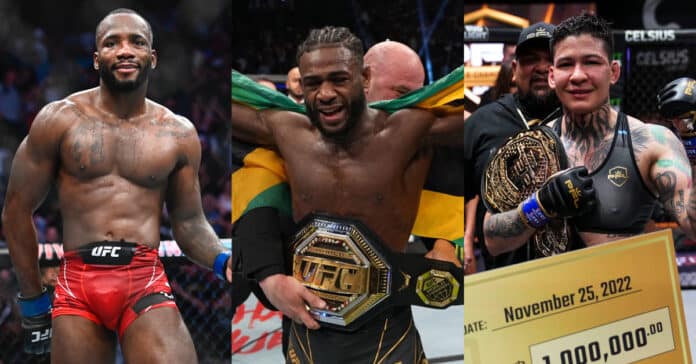 As the curtains close in on 2022, it’s time to reflect on what a year it has been for the underdog and how they have shaken up the MMA World.

Whether it be an unexpected finish or skeptical judging, there is no doubt it has been a year of exhilarating back-and-forth contests with numerous unexpected endings, resulting in many bettor’s parlays being blown out of the water along the way.

While there were many upsets throughout the year, we got our team of writers here at LowKickMMA to vote on what was their biggest ‘Upset of the Year.’

Let’s take a look at who our writers believed produced the biggest shock in 2022.

Taking the top spot for our Upset of the Year is none other than Leon Edward’s (20-3 MMA) stunning KO finish against Kamaru Usman (20-2 MMA) to become the new Welterweight Champion at UFC 278.

Although Edwards was finally getting a long-overdue title shot, he was going against a former foe in Kamaru Usman.

After taking out Edwards in his UFC debut, following his Ultimate Fighter triumph Usman went on a 13-fight win streak whilst picking up the 170lbs title along the way.

The ‘Nigeran Nightmare’ had looked unbeatable over the course of six years and was rightfully the pound-for-pound king.

Unsurprisingly ‘Rocky’ entered the rematch as a large underdog and it was expected Kamaru Usman would use his superior wrestling to tire and limit Leon Edwards’s striking ability, which he did.

Apart from a well-contested opening round one, Usman was in cruise control for much of the fight. The former champion was able to mix up his martial arts as he constantly threatened the takedown allowing for opportunities to score using elbows and punches, enabling him to dictate the fight.

With only one minute left on the clock in the fifth and final round, Leon Edwards stood dejected in the Octagon knowing his dreams of becoming Champion were slipping away. As a convincing Kamaru Usman decision victory seemed all but secured while the UFC commentary team began to “write his obituary.“

However, Edwards produced something that will be echoed in UFC history for eternity after setting up Usman for an emphatic head kick which left him laid out on the canvas sending the Phoenix crowd and UK fans back home into a frenzy.

As the year comes to a close, I’ve decided to put together a list of my personal favorite MMA moments of 2022, starting with KO of the Year

Easy one for me, Leon Edwards with the cleanest head kick you’ll ever see outta nowhere to win the 170lb title.pic.twitter.com/dK7TvP59aF

Considering the pair’s first meeting and the stature of the opponent he faced, alongside, the back story of all the adversity Leon Edwards had overcome to reach the pinnacle of the sport. There is no doubt he has earned this year’s ‘Upset of the Year’.

Although Edwards Vs Usman 2 is our unanimous pick for the ‘Upset of the Year.’ UFC 273 was also a setting for, yet another dramatic upset in 2022 with the much-anticipated rematch between Aljamain Sterling (22-3 MMA) Vs Petr Yan (16-4 MMA) at UFC 273.

Following the controversial conclusion of the pair’s first meeting, many fans still believed Petr Yan was still the champion at 135lbs and one of the best fighters within the UFC after an almost flawless performance at UFC 259.

Despite Sterling entering UFC 273 as the champion after a year out, much of the MMA community still believed he had a lot to prove before people would label him a ‘legitimate’ champion.

In the meantime, Yan returned to action securing an interim title after a five-round war against Cory Sandhagen at UFC 267 (15-4 MMA) which only added to the pressure.

Regardless of any added pressure, at UFC 273 ‘Funk Master’ showed his championship metal, weathering the storm and displaying a more sophisticated game plan.

Sterling managed his stamina as well as utilizing his wrestling more effectively which as a result, allowed him to nullify Petr Yan’s capability to dictate the fight on the feet, earning himself a closely contested split decision victory.

This was undoubtedly a career-defining fight for Aljamain Sterling, for his legacy and for himself. Against a guy whom many thought would continue to ragdoll the Bantamweight division.

Even against the odds, he came back refocused and proved to everyone why he has the right to have that gold belt wrapped around his waist.

If you ask me that’s one of the biggest ‘Upsets of the Year.’

When talking about the biggest upsets of the year in 2022, you have to include the 2022 PFL championship trilogy bout between Kayla Harrison (15-1 MMA) Vs Larissa Pacheco (19-4 MMA).

Although Harrison had beaten Pacheco twice before, Pacheco gritted her teeth and fought her way back to an opportunity for redemption at the PFL Championships 2022.

Since her last loss against Harrison in 2019 for PFL gold, the 28-year-old had recorded five straight wins all coming by finish in the first round, which is the Brazilian’s largest win streak since 2014 as she continued to gun Harrison.

Despite coming into the 2022 PFL Championships a large betting underdog, she came in with more favourable odds than her first two encounters with Kayla Harrison.

Through five rounds Larissa Pacheco was able to use her jiu-jitsu to threaten submission off her back, whilst also controlling large portions of the fight.

Pacheco was also able to find success on the feet, backing up Kayla Harrison with heavy shots.

As the final horn sounded there was still uncertainty as to who had done enough to win. However, the judges saw enough to award Larissa Pacheco with a unanimous decision.

The ability Larissa Pacheco showed, not only put all the pieces together to beat an unbeaten mixed martial artist and a judo gold mealiest, but she was also able to combat the occasion and overcome all the mental hurdles standing in her way.

To see someone, rise above extreme adversity and come out on top to achieve greatness is why we watch the sport of MMA and that is why it is one of the biggest ‘Upsets of the Year’.

Full List of Votes for Upset of The Year:

Which was your pick for the biggest upset in 2022?