[UPDATE] De La Rosa Out Of UFC 269 Bout Against Maycee Barber
published on October 6, 2021
curated and posted by BRWLRZ Team

Maycee Barber has announced on her Instagram Stories that she will not be fighting Montana De La Rosa at UFC 269 after De La Rosa was forced to withdraw due to injury. A subsequent MMA Fighting report revealed that the injury is not severe and the UFC is hoping to reschedule the bout at a later time.

With this cancellation, here is the updated lineup for UFC 269 on December 11:

Maycee Barber has her return date set, as the 23-year-old will take on fellow twenty-something flyweight Montana De La Rosa at UFC 269.

De La Rosa informed MMA Junkie of this bout agreement on Wednesday. Another noteworthy bout that was announced this week was a bantamweight title fight between champion Amanda Nunes and eager challenger Julianna Peña, but there is currently no word on what will be the main event or location for the event.

Maycee Barber is coming off a highly controversial victory over Miranda Maverick at July’s UFC Fight Night: Sandhagen vs. Dillashaw event. Though many scored the bout for her opponent, the much-needed win after having lost two consecutive fights prior will no doubt boost the characteristic confidence of Barber heading into this next venture. Barber is currently ranked #13 in the flyweight division, and a victory here under the PPV lights over another top-15 opponent could put her inside the division’s top 10.

High-level grappling practitioner Montana De La Rosa will enter this bout with a #15 ranking attached to her name and in pursuit of a second consecutive victory herself. De La Rosa has had a shaky run to her three-year UFC career thus far, but if her last performance is any indication, she may be on the cusp of realizing her potential and establishing a steady upward trajectory.

In this performance, De La Rosa earned her first TKO victory in the UFC over Ariane Lipski in June. We’ll see if she can go back-to-back against the very tough out that is Maycee Barber.

With the addition of this flyweight bout, the current lineup for UFC 269 is as follows.

We’ll keep you up to date on any further updates surrounding the UFC 269 pay-per-view. 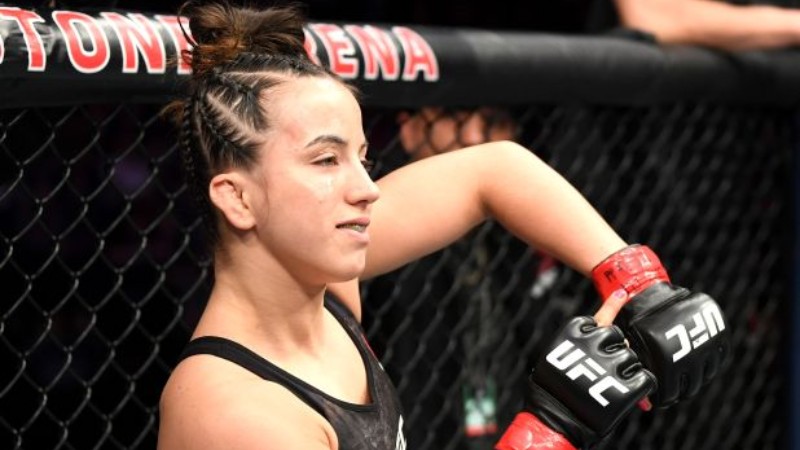