The UFC Vegas 43 bonuses have been released.

The event took place in Las Vegas, Nevada at the UFC Apex facility. Headlining the card was a clash between Ketlen Vieira and Miesha Tate. This fight saw the first round of Tate clinching with her up against the fence. Vieira went for a takedown, but was stuffed. Vieira was the quicker fighter. Tate was closing in when she threw shots and usually ate punches as a result.

The second round featured Tate throwing her hands more with a quicker pace and even landed a front kick to the face. They exchanged more strikes in the third round. Tate went for a takedown, but it was stuffed. Tate landed a big time right hand to open the fourth round. Tate did get a takedown and took her back, but Vieira stood up. The judges gave the win to Kelten by decision.

The co-main event saw more action between Michael Chiesa and Sean Brady. The first round was weird as in the first minute, Chiesa got kicked in the nuts to start off the fight while Brady got poked in the eye. Brady eventually got to take him down twice, but Chiesa managed to get back to his feet pretty quickly without taking damage. Brady had a cut under left eye and a bloody nose. In the second round, Brady got a takedown and took his back where he kept him there for the rest of the round. Brady got the decision win.

Taila Santos got some extra cash for submission win over Joanne Calderwood. Peep the full list of performance bonus winners below.

Performance of the Night: Taila Santos

Fight of the Night: Davey Grant vs. Adrian Yanez

Were the right choices made for the UFC Vegas 43 bonuses? 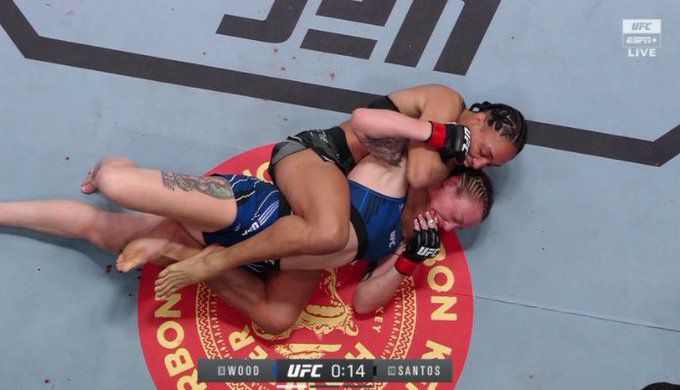