A pair of light heavyweight gunslingers take center stage at UFC Vegas 38 and will vie for a spot among the gauntlet of contenders sitting atop the 205-pound weight class.

Thiago Santos will return in a quest for redemption after losing his last three fights. After moving up from middleweight, the Brazilian realized success at light heavyweight. The 37-year-old took his first fight at 205-pounds in 2018 against Eryk Anders. The performance earned the dangerous striker a $50K bonus for ‘Fight of the Night’ and he won the bout by TKO after the referee ended the contest.

Following his successful debut at 205 pounds, “Marreta” fired off two more finishes before UFC brass saw enough and granted him a title shot against Jon Jones. Unfortunately, the Brazilian challenger would not only lose but have his knees destroyed in the process.

After surgeries on both knees, Santos returned, though many feared he would not perform at 100% capacity. Seemingly those worries turned out to be true, and the former title challenger lost his next two fights when paired against Glover Teixeira who is challenging for the title soon, and the #3-ranked Aleksandar Rakić.

As the age of forty rears its head for Thiago Santos, a striker’s delight match-up between Johnny Walker is the ideal showcase fight for the veteran to get back to his winning ways.

Will Johnny Walker’s Nomadic Lifestyle Assist Him At UFC Vegas 38?

It’s no secret Walker has dabbled with multiple training camps during his 3-year UFC tenure. At one point, the flashy light heavyweight was living in Taiwan and training with his coach. Then, after his loss to Corey Anderson by knockout, it was the last straw and the 29-year old took his services to the famous Tristar gym, coached by Firas Zahabi.

Once again, the nomad moved on like a wandering samurai and is now training at Conor McGregor‘s camp, SBG Ireland under the tutelage of John Kavanagh. In September of 2020, Walker rebounded after back-to-back losses to Anderson and Nikita Krylov with a blistering finish against Ryan Spann.

While Walker has continued to test out different camps, at times the instability may hinder his ability to grow steadily as an MMA fighter. Having notched a finish in his last fight against “Superman” perhaps the change in camps is helping after all. With UFC Vegas 38 in his sights, unquestionably, his next test against Thiago Santos will be telling and has huge implications on his burgeoning UFC career.

Santos holds a finish win over the currently reigning 205-pound champ Jan Błachowicz. With his back against the wall, the former title challenger will need to take a fluid approach in order to fend off a striker as dynamic as Walker.

All four UFC contests that Walker was successful in were finished due to strikes. In contrast, during the long career of Thiago Santos, the Brazilian has an overall record of 21-9 with fifteen of those fights being finished with his striking toolbox.

On Saturday, Thiago Santos will fight down in the rankings to cement his stay among the elite at light heavyweight. The upside for Walker is huge because if he is victorious, he rockets into the top five of the division overnight. Johnny Walker’s tendency to move camps will be put to the test, and if there are discrepancies in his MMA game, someone as seasoned as “Marreta” will find those weaknesses and aim to exploit them. The fight promises to be all-action as the two create carnage in every Octagon appearance.

Who are you picking to win this weekend at UFC Vegas 38? 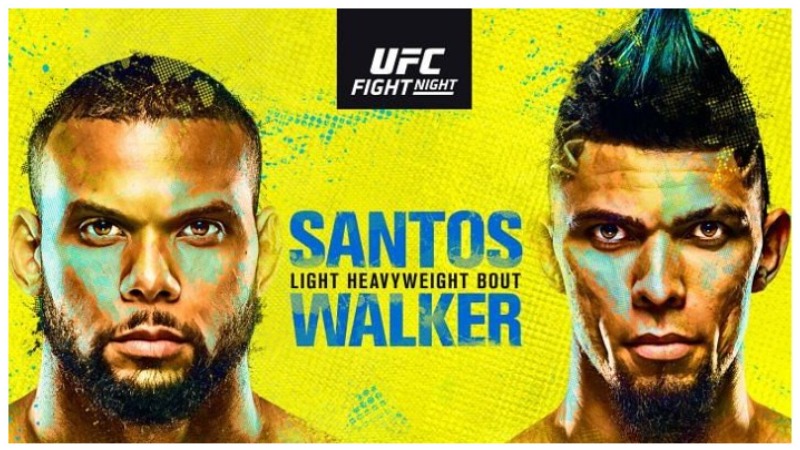