Brian Ortega vs. Chan Sung Jung was the bad blood fight that fans were expecting.

The two fighters met in a featherweight bout on Saturday night (October 17, 2020) at the UFC on ESPN+ 38 event from the Flash Forum on Yas Island, Abu Dhabi aka Fight Island.

This was an exciting fight as the first period saw Ortega briefly drop him with a left hook. The second frame saw Ortega connect with a nasty spinning back elbow that dropped Jung, who somehow survived the strikes on the ground.

The fourth round saw Ortega catch him with a right hand that sliced open Jung’s eyelid before getting a takedown. Ortega got the decision win.

Ortega earned a 6-fight winning streak to get a title shot against then-UFC featherweight champion Max Holloway at the UFC 245 pay-per-view event. Holloway retained the title when he beat Ortega by fourth round TKO.

Jung entered this fight with a 3-2 record in his last five bouts. He’s only fought four times in the last four years with a win over Dennis Bermudez by KO in 2017, a loss to Yair Rodríguez, and a win over Renato Moicano by TKO in 2019. He scored the biggest win thus far in his MMA career when he beat Frankie Edgar at UFC Busan last December by first-round TKO.

MMA News is providing ongoing coverage of UFC on ESPN+ 38. We’ve got you covered with live results, video highlights, and post-fight tidbits. 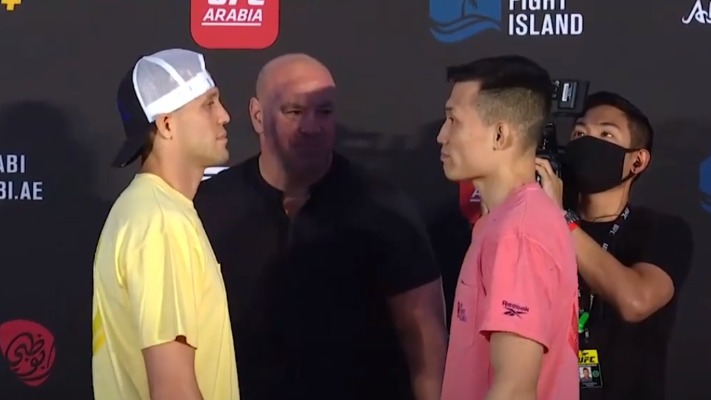