UFC 270 is now one sleep away, and to get you even more hyped for the event than you already are, we’ve got some staff predictions locked and loaded for ya!

UFC 270 will be available exclusively on ESPN+ pay-per-view, with the main card beginning at 10:00 PM ET, the ESPN2 preliminary card kicking off at 8:00 PM, and the early preliminary card starting at 6:00 PM.

The main event will see the heavyweights collide in a title unification bout between Francis Ngannou and Ciryl Gane. Then, in the co-main event, we will see Brandon Moreno taking on Deiveson Figueiredo in an exciting conclusion to their flyweight trilogy.

MMA News is the place to be for all the latest UFC 270 updates. Andrew Ravens, Ed Carbajal, and I have provided predictions for the main card.

Here is the full main card lineup for tomorrow night:

Clyde Aidoo: After gassing out the likes of which UFC fans have rarely seen in his loss to Anthony Hernandez at UFC 258, Rodolfo Vieira was able to show that he’s not worth writing off yet and his hype train still has some steam in the engine. In fact, it had more than enough to earn him Performance of the Night in his last outing, featuring a submission victory over Dustin Stoltzfus. It’ll take a while for me to build back the confidence I had in picking Vieira heading into 2021, but I think that he’s still more dangerous and lethal than Turman, who has lost two of his last three. (Prediction: Rodolfo Vieira)

Andrew Ravens: While this is a late addition to the main card, it should be a really fun fight. Turman is someone the hardcore fans know, and while he has struggled as of late, things won’t get easier against Vieira, who is a real prospect with an 8-1 record. Vieira has been submitting nearly everyone, and I see that happening here for the win. (Prediction: Rodolfo Vieira)

Ed Carbajal: Viera is a heavy favorite here and considering his 8-1 record, it’s easy to see why. Seven of his eight wins came by way of submission, with his last win earning a Performance of the Night bonus for his third-round rear-naked choke win over Dustin Stoltzfus. Still, Turman brings more experience and while he has some losses on his record, he’s never lost by submission, the bread and butter of Vieira. I think Turman can pull off a win here. (Prediction: Wellington Turman)

Clyde Aidoo: Cody Stamann presents the kind of style that will reveal his opponent’s ability to problem-solve and show his work. You can never expect an easy night at the office with Stamann’s grinding fight style standing in your way. Nurmagomedov has finished two of his last three fights, but I’m not convinced he’s a lethal enough finisher to put Stamann away, something only Alamain Sterling has done in the UFC.

However, with Stamann losing two straight and Nurmagomedov being a bit hungrier, more versatile on the feet, and having good enough takedown defense to likely win the majority of the rounds, I’m going to give the very slight swing in his direction. (Prediction: Said Nurmagomedov)

Andrew Ravens: Nurmagomedov is the real deal despite a bump in the road against Raoni Barcelos and with Stamann losing back-to-back fights, I think this is a perfect time for Nurmagomedov to make a statement against the always game Stamann. Nurmagomedov walks away with the decision win. (Prediction: Said Nurmagomedov)

Ed Carbajal: Coming off two losses, Stamann has a lot of motivation to start the main card off with a win. However, with someone like Nurmagomedov in his path, that will be easier said than done. Most of Stamann’s wins come by way of decision, and Nurmagomedov’s only two losses are by decision, but that does not mean it can be done easily. That last name coming from Dagestan in MMA usually makes it hard to pick against. (Prediction: Said Nurmagomedov)

Clyde Aidoo: Andre Fialho steps in on short notice in a main card bout on a big PPV to kick off the year. You have to wonder if the UFC jitters will get a hold of Fialho, especially when facing a showman like Pereira, who has gained valuable experience inside the Octagon.

Stylistically, I believe Pereira presents more ways to win this fight. Fialho is a knockout artist, but he can be very flat-footed and could let Pereira dictate the pace and flow of the fight. Plus, Pereira has the ability to take the fight to the mat and win that way also if he wants to fight more conservatively here. (Prediction: Michel Pereira)

Andrew Ravens: What a way to make your promotional debut for Fialho, who has won his last four fights. On the flip side, Pereira has won his last three. I’ll side with Pereira here with his experience getting it done by decision. (Prediction: Michel Pereira)

Ed Carbajal: I expect a knockout here and I expect a possible Fight of the Night candidate as well. Both men are on win streaks and have on their résumés a hefty number of knockouts on their win records. This is Fialho’s UFC debut and enough fighters have talked about “UFC jitters” to make me think this is a big ask for the first fight in the UFC in the first pay-per-view of the year. (Prediction: Michel Pereira)

Clyde Aidoo: It’s common for the sports world to have a short memory and only base predictions on the most recent outcome in terms of a rematch or trilogy. While it’s true that Moreno has continued to improve and has a tremendous career trajectory at the moment, let’s not forget that Figueiredo was one foul and point deduction away from holding a victory over him as well.

This time around, I believe Figueiredo will come with a different, more balanced style after putting in time over at Fight Ready with Henry Cejudo. Provided the weight cut goes better this time and we get a healthy and fit God of War, I believe he’ll mix in the right amount of chaos with the cerebral to outgun Moreno this time out. (Prediction: Deiveson Figueiredo)

Andrew Ravens: This is a must-win situation for Figueiredo, as he already lost to Moreno and with them already going to a draw, it would be hard to make the case as to why he should get another title shot as long as Moreno is champion. With that focus and Figueiredo correcting his mistakes in their last fight, I see that adding up to just enough for him to pull off the win. Figueiredo gets it done by split decision. (Prediction: Deiveson Figueiredo)

Ed Carbajal: Nobody asked for this fight, but I’m 100% here for it. The first one was a draw; the second a finish that had Moreno crowned champion via submission. This one will take the cake, but I find it hard to pick against Moreno. As good as Figueiredo was as a champ, preparedness always seemed to be an issue for him in the past, and it never seemed like something he resolved in the last fight. I think Moreno puts a stamp on the flyweight title this time around (Prediction: Brandon Moreno)

Clyde Aidoo: Stylistically and also in terms of unpredictability, this has my vote for the best heavyweight fight ever. I also have a hunch that the fight can go more ways than people may think. We’ve never seen Ngannou in a drawn-out back-and-forth fight in the UFC. This could be the first time for that. Conventional wisdom says that if that were to happen, Gane would be the easy pick. After all, he moves around with cat feet and has a fight IQ far beyond his MMA years, even superior to most veterans of the game. Additionally, he is a superb technical striker with a cardio that doesn’t quit.

Even still, what we learned from Ngannou in his dominant UFC 260 win over Stipe Miocic is that he doesn’t need just one shot. He can win a round against a great striker and competitor with intelligent shot selection and multiple striking attacks. And he also proved that he has continued to evolve and work on his overall game, as he demonstrated with his heavily improved takedown defense and grappling.

So for me, there are two reasons to side with Ngannou. First, we still don’t know exactly what he’s capable of and how much he’s improved since losing to Miocic in 2018. Therefore, he may indeed be capable of defeating Gane in a prolonged battle. And even if that’s completely off, there’s still the proven truth that all he needs is one shot to close the show. And if this fight is won or lost on the feet, which I highly expect it to be, then that one shot is all he needs over the tactician. (Prediction: Francis Ngannou)

Andrew Ravens: Gane seems like the right opponent to beat Francis if he can avoid being knocked out. Francis showed off his takedown defense improvement in his last fight with Stipe, and Gane is a much better wrestler than Ngannou. But I just don’t see Gane beating Francis. I think Francis has continued to improve his weaknesses, which he will have the world talking about come Saturday night. I have Francis knocking out Gane in the third round. (Prediction: Francis Ngannou)

Ed Carbajal: There’s a lot to look at in this match-up, especially since the two men have a history of training with one another. Ngannou is a power puncher with the speed to make him just as dangerous, and Gane is a very technical striker that went undefeated in Muay Thai. Both men like to hit, so that might be the contest we see, or it could make one of these heavy hitters test their grappling against each other. That’s where I think Gane has the edge. He may also have the technical edge in striking, but Ngannou has more than a puncher’s chance in any fight. It’s a coin toss, but I think Gane can win this. (Prediction: Ciryl Gane)

That’ll do it for our UFC 270 staff picks! What do you think? Do your picks look similar? Let us know in the comments section! Also, you can check out the UFC 270 undercard below.

Be sure to keep it right here on MMANews.com tomorrow for all the results, highlights, and updates on UFC 270! 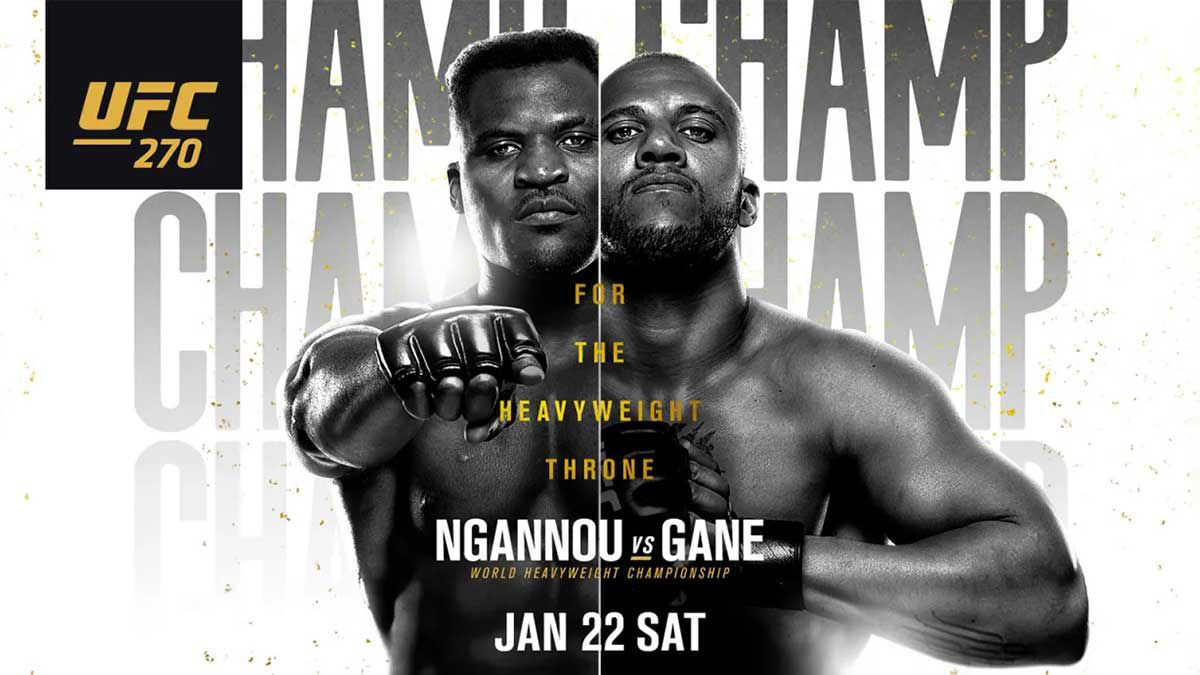