UFC 268: Usman vs. Covington is almost here and we’ve got you covered with our expert Staff Predictions.

Arguably the best card of 2021 goes down in The World’s Most Famous Arena, Madison Square Garden in New York tomorrow, November 6. The event will be available exclusively on ESPN+ pay-per-view, and the lineup in store for fans will be worth every penny. The main card begins at 10:00 PM ET, with the ESPNews preliminary card kicking off at 8:00 PM and the early prelims starting at 5:00 PM.

The UFC 268 main event will be a rematch of our 2019 Fight of the Year between Kamaru Usman and Colby Covington. There will be another rematch with gold on the line when “Thug” Rose Namajunas puts up her strawweight title against Zhang Weili. And who could ever overlook the lightweight banger between Justin Gaethje and Michael Chandler?

Also on the main card will be former champion Frankie Edgar facing Marlon “Chito” Vera. Plus, Shane Burgos will also be in action against Billy Quarantillo.

MMA News is the place to be for all the latest UFC 268 updates. Staff members Andrew Ravens, Ed Carbajal, and Harvey Leonard have provided predictions for the main card. Here is the full main card lineup for tomorrow night:

Andrew Ravens: This is the people’s main event right here. Two elite fighters that should take part in a war inside of the Octagon. Both fighters are coming off losses to the division’s bests so that’s nothing to take away from them. I see Chandler wanting it more and will find a way around Gaethje. If we’re being honest, it really could go either way, so I have Chandler winning the last two rounds to get the decision win. (Prediction: Michael Chandler)

Ed Carbajal: If any fight is for the harcore fans, this is it. This is their main-event. The former WSOF lightweight champion versus the former Bellator MMA lightweight champion. No one is more game than these two lightweights, but Chandler has lost to leg kicks in the Garden before. Leg kicks is something Gaethje is very good at and if luck has anything to do with it, Gaethje’s luck in The Garden has been good and Chandler’s, not so much. (Prediction: Justin Gaethje)

Harvey Leonard: This really is a coin flip. While the current Gaethje is a different iteration than the one who was finished by Alvarez and Poirier, he was still floored by Ferguson last year. With the power of Chandler, that could certainly happen on Saturday. In the same vein, “Iron” was finished by Oliveira, who is by no means a striking phenom or powerhouse. There’s no doubt “The Highlight” could get the job done with his hands.

Ultimately, I’d expect Gaethje to avoid Chandler’s takedown attempts, which, despite the pre-fight narrative, I think are inevitable. I’m not confident in backing either to finish the other. With that in mind, it comes down to who I believe will have the advantage across three rounds on the feet, and that’s Gaethje. (Prediction: Justin Gaethje)

Andrew Ravens: This is a really fun fight that is flying under the radar, but we have two finishers whether that’s knocking someone out or submitting them. Based on their recent histories, they do have a track record of finishing a fight then going to a decision, and they’re both coming off finishes so it will likely go to the judges. Burgos has been on a losing streak in his last two fights, but he’s faced tougher competition. Burgos rebounds with a decision win. (Prediction: Shane Burgos)

Ed Carbajal: This is a really good featherweight matchu,p with Burgos coming off two losses in a row and Quarantillo trying to keep his win streak going. Burgos will want to break the losing streak, and being the hometown fighter against a slow starter like Quarantillo makes me think he can do just that. (Prediction: Shane Burgos)

Harvey Leonard: Despite losing his last two, Burgos continues to entertain every time he enters the Octagon. This fight should see him maintain that reputation but also return to the win column. While Quarantillo is dangerous on the feet, “Hurricane” is just that bit slicker and sharper. If Burgos trust his chin too much like he did against Edson Barboza, and allows himself to get picked apart with kicks, that could be all she wrote for his place in the rankings.

However, I expect this to essentially be a flip of the script from Burgos’ defeats to Emmett and Barboza. While the fights were entertaining and competitive, Burgos was narrowly worse off from the exchanges. I expect that to be the opposite this time around. (Prediction: Shane Burgos)

Andrew Ravens: Both guys are entering this fight with a roller coaster of past performances as of late. Edgar is an aging fighter who is past his prime, and I just see a way he beats the younger Vera, who will be in the division to stay for the next five years as a notable fighter. Vera makes a statement with a first-round KO win. (Prediction: Marlon Vera)

Ed Carbajal: This one’s tough because Edgar’s not only a favorite for NY/NJ MMA but has fought some legendary fights. He’s the older fighter, in a weight class that has not been kind to him when he went lighter. His career was originally at lightweight, and his last loss at that weight class was a knock out. Vera might be able to pick up the win here if there are no issues on fight week (Marlon Vera).

Harvey Leonard: Edgar no longer has the volume and output that gave him the edge over so many on the feet. Against a young, hard-swinging contender like “Chito,” Edgar might find himself taking more damage than he wants. With that in mind, it wouldn’t be surprising to see “The Answer” try and take the fight to the ground to secure a couple of rounds in a fashion similar to José Aldo’s victory over Vera last December.

However, we saw Munhoz defend a few takedowns against Edgar and I’d expect Vera to keep the majority of the fight on the feet. In that scenario, I believe his vicious body and leg attacks will do the damage. (Prediction: Marlon Vera)

Andrew Ravens: This fight answers the question of whether Rose is truly back or not. While yes, she dominated Jéssica Andrade and did beat Weili in their past fight, some could argue that Zhang just got caught. Let’s find out. MSG is also the same spot where Rose won the strap, so there’s that. I think Zhang just had an off-night. And as much as I would love to see Rose be the dominant fighter she once was, I see Zhang edging her out by split decision to reclaim her title. (Prediction: Zhang Weili)

Ed Carbajal: One thing Namajunas has proven in her career is that when she gets a rematch, she wins the rematch. All of her rematches are to former champions an bothl of them she won. This is her third rematch, and it’s hard to see it going any differently. Maybe it will go the distance, but Namajunas’ track record and evolution as a mixed martial artist are hard to ignore. (Prediction: Rose Namajunas)

Harvey Leonard: Zhang hadn’t been knocked out like she was against UFC 261 in her 22 fights prior. That’s not to say Namajunas’ victory was a fluke. But given Zhang’s record and the war she went through with Jędrzejczyk, in which she ate the hardest shots the Pole had to offer, I’m confident to assume a KO like that won’t happen again, especially considering how clear her errors were.

I expect this weekend’s co-main event to go the distance. If Zhang can stay in range and maintain the level of volume she did against Jędrzejczyk, I can’t see her being outpointed across five rounds. It’s always tough to bet against “Thug Rose” but before April, I believed Zhang was set for a long reign. That KO loss hasn’t changed my view on her ability to dominate the division. (Prediction: Zhang Weili)

Andrew Ravens: A highly anticipated rematch, but not much has changed with these two fighters as Covington got one impressive win over an aging Tyron Woodley while Usman continues to be the best fighter in the division and backing up that statement every time he fights. While I think Covington is the best fighter to give Usman a real challenge, Usman will overcome that challenge en route to a unanimous decision win. (Prediction: Kamaru Usman)

Ed Carbajal: Usman has evolved into a beast as of late. To the point he is rematching opponents he has already beaten. First it was Jorge Masvidal, who he finished after winning the decision in their first outing, and now Covington. He finished Covington in the final round in their first fight; he probably does it sooner at UFC 268. (Prediction: Kamaru Usman)

Harvey Leonard: Given what Covington’s done since UFC 245 and what Usman’s done in comparison, I can’t see any logical explanation for suggesting “Chaos” will beat the champion. Not only has Usman been far more active and comfortably turned away the challenges of top contenders, but he’s grown exponentially under the tutelage of Trevor Wittman.

Covington has recorded a sole win over a declining Woodley, and whilst we’re yet to see a real demonstration of “Covington 2.0” since his ATT departure, I can’t see a way his growth will have surpassed Usman’s in the same period. The pair engaged in a stand-up war in 2019 before the champ’s striking was polished. As we saw against Masvidal, “The Nigerian Nightmare” is now lethal on the feet. If the fight stays standing, Usman ends it before the final horn. (Prediction: Kamaru Usman)

That’ll do it for our UFC 268 staff picks! What do you think? Do your picks look similar? Let us know in the comments section! Also, you can check out the UFC 268 undercard below.

Be sure to keep it right here on MMANews.com tomorrow for all the results, highlights, and updates on UFC 268! 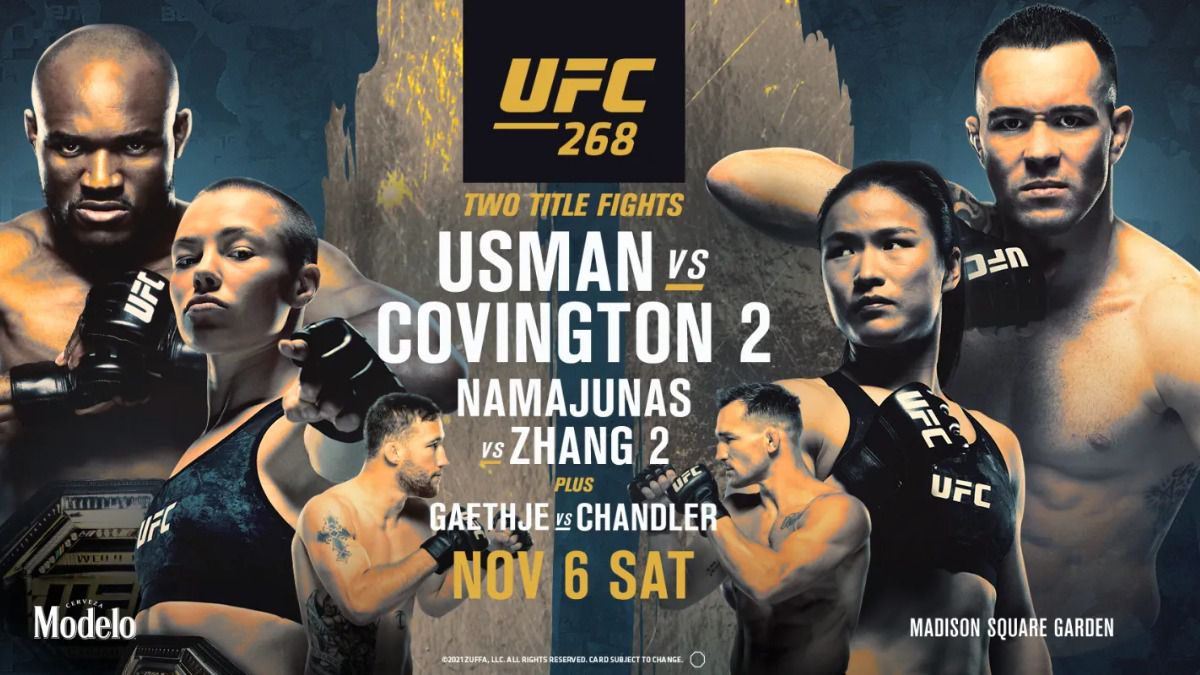