The two fighters met in a bout on Saturday night (Saturday, 25, 2021) at the UFC 266 pay-per-view event from Las Vegas, Nevada at the T-Mobile Arena. There was no feeling out process in this one as they came right out. Ortega had a cut above his right eye and Volkanovski was bleeding under his left eye.

Ortega did get a takedown in the fourth round and went for a guillotine choke, but Volkanovski got out of it. Volkanovski with punches on top. Volkanovski was awarded the decision win to retain the featherweight title.

Volkanovski had the speed while Ortega seemed to have more power.

Volkanovski went on a seven-fight winning streak under the UFC banner to earn the title fight against Max Holloway at UFC 245 where he won the title. He followed it up with a decision win over Holloway at UFC 251. Before UFC 245, in his previous  fights, he finished Chad Mendes in brutal fashion at the UFC 232 pay-per-view event from the Forum in Inglewood, California and then a decision win over former UFC champ Jose Aldo at the UFC 237 pay-per-view event from the Arena da Baixada in Curitiba, Brazil.

Ortega earned a 6-fight winning streak to get a title shot against then-UFC featherweight champion Max Holloway at the UFC 245 pay-per-view event. Holloway retained the title when he beat Ortega by fourth round TKO. Ortega rebounded with a decision win over Chan Sung Jung in October 2020. 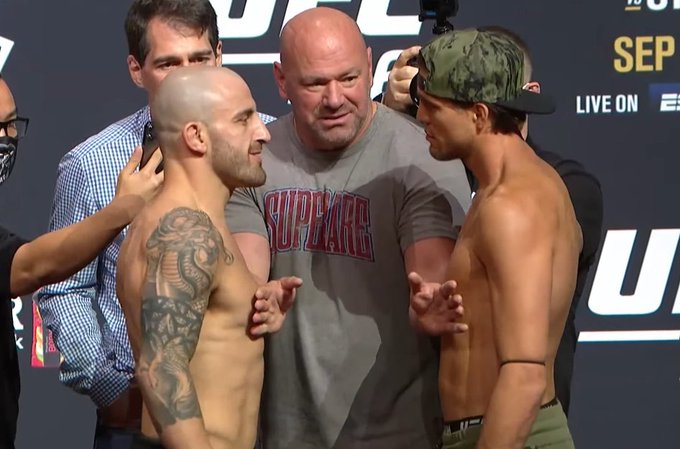