UFC 254 is finally upon us. Fortunately for us all, we will have to wait less than usual for this pay-per-view to kick off. The early start time (2 PM ET for the main card) will deliver a Christmas-morning feel, with the gift of arguably the best lightweight fight of all time waiting to be unwrapped.

Fight Island will play host to this card that features the much-anticipated showdown between UFC lightweight champion Khabib Nurmagomedov and interim champion Justin Gaethje. In the co-main event, Robert Whittaker will face Jared Cannonier. Also featured on the main card is Alexander Volkov vs. Walt Harris.

You can view the full main card below:

MMA News is the place to be for all the latest UFC 254 updates. Earlier today, we covered the weigh-ins, which you can see the results for here. Myself, Ed Carbajal, and Andrew Ravens have provided predictions for the card, which you can find below.

Clyde Aidoo: If not for a last-minute, miraculous, yet still very technically sound submission loss at the hands of Paul Craig, Magomed Ankalaev would still be undefeated and understandably so. He has a steely composure about him with an ability to calmy withstand pressure before closing the distance on his own time. This mixed with a healthy helping of a Dagestani ground game will be the recipe needed to cool down Cutelaba’s fire and earn either a stoppage or a decision victory. Both routes are live in this one for Ankalaev, who I see getting the win in any number of ways. (Prediction: Magomed Ankalaev)

Andrew Ravens: Here’s a fight that is flying under the radar. Their first fight ended in just 38-seconds with Magomed winning. Take their last fight out of the conversation, Magmoed has been on fire with a three-fight winning streak while Ion has gone 3-1. I think Ion is more cautious in the early going but lets his guard down and Maomed capitalizes with a second-round TKO win. (Prediction: Magomed Ankalaev)

Ed Carbazel: This fight is a do-over from their last fight back in February where Ankalaev pretty much had Cutelaba out on his feet, however the stoppage has been viewed as early. Cutelaba having experienced his opponent before might be prepared for a rematch but it is hard to ignore the first fight, regardless of the stoppage. (Prediction: Magomed Ankalaev)

Clyde Aidoo: It’s still an open book as to what Shakirova is capable of in the UFC, and virtually every card has upsets, so this definitely has what it takes to be one of them, but it’s hard not to lean on Murphy’s momentum, experience, takedown defense, and potential cardio/preparation advantage in what I strongly expect to be a fight that goes the distance. (Prediction: Lauren Murphy)

Andrew Ravens: Another fight that not a lot of people will look at due to the names, but both fighters are riding a three-fight winning streak heading into it. There are two big differences between the two fighters. Murphy has the experience and this marks Liliya’s promotional debut. I have to side with Murphy here just for those two reasons and see her getting it done by decision. (Prediction: Lauren Murphy)

Ed Carbazel: Murphy was originally supposed to face Cynthia Calvillo at UFC 254 but Calvillo had to withdraw due to a positive COVID-19 test and was replaced with Shakirova. That happened on October 15 which could come with a rough weight cut and little preparation could be against Shakirova and makes it easy to go with Murphy here. (Prediction: Lauren Murphy)

Clyde Aidoo: The biggest concern for Hawes backers is his cardio. He seems to slow down after the first round while Malkoun does not. For me, though, I’m going to go with Hawes in spite of the cardio liability, as he also has more than twice the experience Malkoun has and is a much stronger grappler. We also can’t discount the possibility that Hawes has learned from his past cardio failings and made the proper adjustments. (Prediction: Phil Hawes)

Andrew Ravens: Don’t feel bad if you don’t know these two fighters as they’ve never fought in the UFC. Hawes did have one fight on Dana White’s Contender Series, but that’s it. So why do these guys get their promotional debuts on the main card of one of the biggest shows in 2020? They finish of course. Hawes has six of his career eight wins by KO while Malkoun has two of his four wins by KO. I’ll side with Hawes here, but it’s a coin flip. (Prediction: Phil Hawes)

Ed Carbazel: This might be an odd placement on this card for the fight with two young, up and coming fighters. Other than being undefeated, there is not a lot to off on Malkoun where Hawes has not only fought for other major MMA promotions, but trains with a lot of notable fighters out of Hard Knocks gym. Malkoun could make a name here should he win, but for now the safe pick could be Hawes. (Prediction: Phil Hawes)

Clyde Aidoo: Volkov mostly shines when he breaks his opponent down over time with a wide menu of strikes. Walt Harris has not lost via decision since 2016, though, and I believe his growth, maturity, and power will turn in a similar result that Derrick Lewis was able to earn by finding Volkov’s locatable chin, but he’ll do so much sooner than the closing seconds. (Prediction: Walt Harris)

Andrew Ravens: A lot of people think of Volkov when he was slicing through the division but he has found some challenges in his way as of late. He’s 1-2 in his last three fights with the only win over Greg Hardy. Harris is always a threat. I can’t see Harris winning here, but I think he brings a serious challenge if he can survive. Volkov wins by unanimous decision. (Prediction: Alexander Volkov)

Ed Carbazel: This heavyweight clash will be one that puts power versus experience to the test. In this equation, Harris would be power and Volkov experience. That is not to say Volkov does not pack any power, UFC heavyweights tend to have ample supply but if Volkov’s experience can protect him from the power of Harris, it could be his fight to win. (Prediction: Alexander Volkov)

Clyde Aidoo: This is a close fight, but I think Cannonier’s ever-growing fight IQ, hunger, and power advantage will earn him either a stoppage or a narrow decision victory over Whittaker. Whittaker may throw and possibly even land more volume, but I see Cannonier landing the more impactful shots and maybe even dropping Whittaker. Because even in some of Whittaker’s best performances, he has been very hittable, and the way Cannonier has been looking, getting hit flush by Cannonier will be a game-changer. (Prediction: Jared Cannonier)

Andrew Ravens: The old Whittaker returned in his previous fight and I see that continuing here. Look, Jared is a really good fighter, but is he an elite fighter like Whittaker? No, he’s not. Thus, I see Whittaker making yet another statement by reminding everyone that he’s the second-best fighter in the division and should get the next title shot. Whittaker gets it done by unanimous decision. (Prediction: Robert Whittaker)

Ed Carbazel: Whittaker may have fought his best fights when he was champion and especially in his two wars with Yoel Romero and his loss to Israel Adesanya that cost him the title. He came back against Darren Till but some would argue that’s not the Whittaker we’re used to. Cannonier knows what’s next if he wins and Adesanya seems to like the idea of a fight with him as well, so it is hard not to go with Cannonier. (Prediction: Jared Cannonier)

Clyde Aidoo: I get it. It’s easy to go with the 28-0 fighter. That’s the safe pick. And I know that Justin Gaethje has all the ingredients needed to stun the world and pull off the upset. But even speaking strictly stylistically, I do not see Khabib staying in kickboxing range, and I think he is the more complete, versatile, and less hittable fighter. These traits can earn him a victory either by points or by submission. And when it comes to intangibles, the spirit in which he competes and carries himself in the Octagon is visceral and complemented by an elite fight IQ. 28-0 or not, I don’t see how you bet against that. (Prediction: Khabib Nurmagomedov)

Andrew Ravens: Obviously a great matchup. While Khabib’s striking has improved greatly in recent years, most people will agree that Gaethje has the advantage there. Clearly, if Gaethje, who has a good takedown defense, can’t stay standing then he will lose the fight. Khabib has to dominate this stage of the fight. I question whether Gaethje can do this for 25 minutes. He has to stay upright and even avoid the clinch. It’s a fun fight on paper, but I have to side with Khabib getting it done by unanimous decision. (Prediction: Khabib Nurmagomedov)

Ed Carbazel: The first round of this match up will be telling of what fans could be in store for. If Nurmagomedov does what we have seen him do 28 times before in the first round, it likely could prove the oddsmakers correct. However, Gaethje is the consummate underdog and has been an underdog since he joined the UFC. There is no fear of injury or loss in Gaethje and that is why he is dangerous to the current champion. (Prediction: Justin Gaethje)

That’ll do it for the UFC 254 predictions. Do you agree with the MMA News staffers? Who do you think will emerge victorious on the main card? Give us your predictions in the comments below and be sure to stick with us for live coverage of UFC 254! 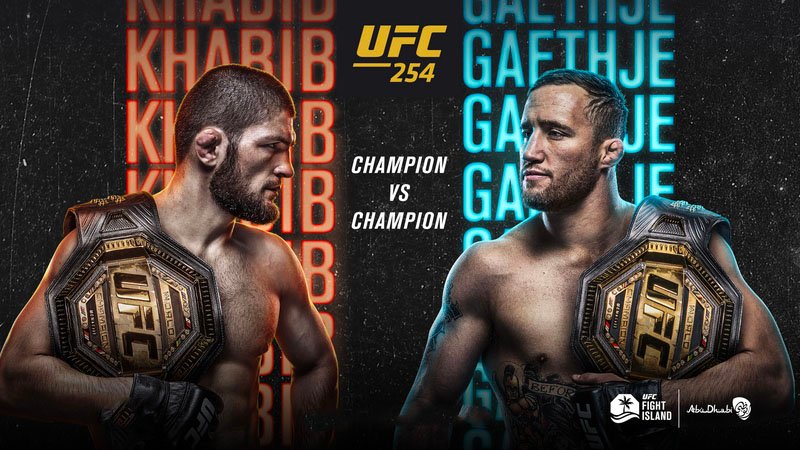