Tyron Woodley Won’t Be “As Patient” In Jake Paul Rematch
published on December 14, 2021
curated and posted by BRWLRZ Team

Former UFC Welterweight Champion Tyron Woodley says that while he won’t get reckless in his rematch with Jake Paul, he won’t be “as patient” as he was in their August contest.

After a four-fight losing skid saw Woodley fall from the 170-pound UFC mountaintop to being released from the promotion earlier this year, “The Chosen One” turned his attention to a new combat sports venture. In an effort to avenge his teammate Ben Askren’s first-round knockout loss to Paul, a YouTuber-turned-boxer, the 39-year-old entered the ring with the 24-year-old for what was his professional boxing debut.

Despite his experience inside the Octagon, Woodley was unable to hand “The Problem Child” his first defeat, falling to a split decision loss on the scorecards. He immediately called for a rematch and hoped for a chance at redemption, but it appeared Paul had moved on and would not be looking back at the former UFC star.

That all changed earlier this month when professional boxer Tommy Fury, originally scheduled to be Paul’s fifth opponent, pulled out, citing a broken rib and bacterial chest infection as the reasons for his withdrawal. On two weeks’ notice, Woodley stepped in to save the Showtime pay-per-view card, and secure his chance for revenge.

Will Woodley Let His Hands Go?

The major factor behind Woodley’s downfall in the UFC was his inability to let his hands go. Many believe that in a tight and competitive fight against Paul, in which Woodley never really looked hurt, the veteran’s struggle to let go played a major part in his defeat to the YouTube sensation.

During a recent appearance on Submission Radio, Woodley echoed that sentiment. “The Chosen One” admitted he let Paul into the fight by not throwing enough, a mishap he’ll hope to avoid making when the pair run it back on December 18.

“I wanna go out there and just let go. For me, it’s never really been about someone beating me because they’re better, because my time has passed, or because they have better coaching, it’s all just been about me, for some reason, not letting go, and when I let go, nobody can touch me. But I didn’t let go. I let people into the fights that never should have been in the fights with me.”

Discussing what makes a fighter struggle to let go, Woodley clarified that his pursuit of “perfection” has left him far too cautious in recent appearances. Acknowledging the need to make fights “ugly” and tough, Woodley suggested he’ll approach the Paul rematch with a fresh approach.

“Overthinking, overanalyzing. Sometimes you become so skilled and learn so many techniques and defenses and counters, you’re so cautious and you know what could come. You just really wanna be perfect. Perfection, sometimes, gets in the way of mastery, you wanna master it… Sometimes you’ve gotta get a little ugly and grimey, and get in there, maybe get hit a couple times, to put yourself in position to get that opening.”

Addressing his August defeat to Paul, Woodley insisted he wasn’t fearful of the Cleveland native’s power or hesitant to walk him down. Instead, he tried to find the balance between aggression and defense, citing Askren and Paul’s second opponent Nate Robinson as two who didn’t do so. While he won’t be as patient this time, Woodley says he certainly won’t be abandoning his defense on December 18.

“I can say I respected him too much or I can look at Nate Robinson that walked in there and ran into a punch and got smoked. My teammate Ben Askren kinda did the same thing, where his hands wasn’t in the proper position. If he got punching power, no matter who it is… I’m not saying that I was fearful, you saw me walking forward regardless, I got hit with it and I walked forward regardless… I wasn’t scared of getting punched. My training partners punch a lot harder and they’re more skilled than him. I just didn’t wanna be reckless. I think it’s a happy medium, I gotta find a line, you know, not crossing the line and just being reckless and not having my defense, but also not being as patient as I was.”

A defeat to Paul was understandably damaging for Woodley. While he now has the chance to get that loss back, and potentially set up a lucrative trilogy fight, back-to-back setbacks against “The Problem Child” would be catastrophic for the 39-year-old’s standing in combat sports. There is certainly a lot riding on Woodley vs. Paul 2.

Who do you think will have their hand raised on December 18, Tyron Woodley or Jake Paul? 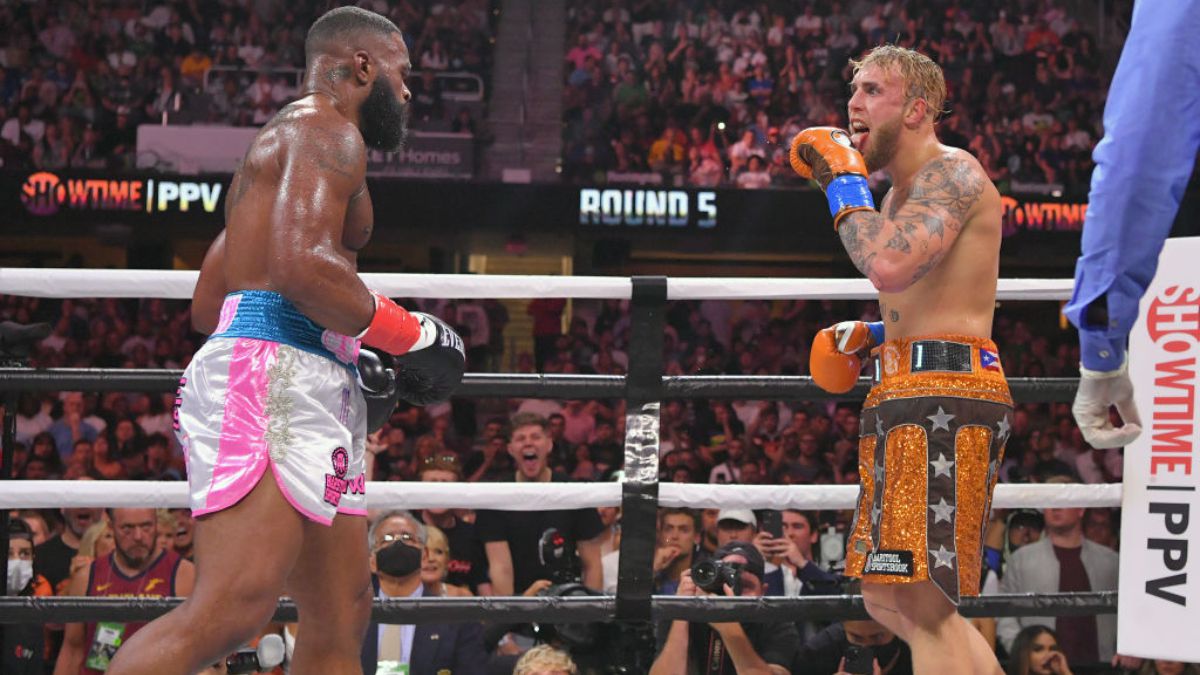