Having not fought in 11 months, Ortega is set to return in this weekend’s UFC 266 main event. “T-City” was last in action against “The Korean Zombie” Chan Sung Jung at UFC Fight Island 6. Across five rounds, the 15-1 contender outpointed the dangerous 34-year-old and secured a unanimous decision victory.

After looking back to his best, Ortega secured his second shot at gold. He was set to meet UFC Featherweight Champion Alexander Volkanovski in the UFC 260 co-main event in March. Unfortunately, a positive COVID-19 test from the Australian forced a cancelation. Rather than an immediate rebooking, the pair instead heated their rivalry as coaches on season 29 of The Ultimate Fighter. After a long wait, the pair will finally collide inside the octagon in Saturday’s pay-per-view headliner.

Ahead of his title challenge, Ortega has revealed the positive impact former UFC bantamweight Champion TJ Dillashaw’s return to action had on him. In preparation for his main event bout with Cory Sandhagen in July, Dillashaw had trained with “T-City.”

Ortega believes the 35-year-old’s ability to make his comeback against one of the division’s best, and fight through early animosity in the form of a knee injury, proved to him that he’s training with the right team.

“It let me know the caliber of people I’m working with now, someone who could go out and do what he did in that kind of a situation,” Ortega said. “… And it helped my confidence because it lets me know I’m in the right place with the right people.” (h/t Yahoo Sport)

Dillashaw also returned the compliment. The Californian praised Ortega’s abilities, and suggested his reach advantage over Volkanovski could see him find success against the champ at UFC 266.

“I got some rounds in with him [when I was preparing for Sandhagen] and I was super impressed with him,” Dillashaw said. “He has a great jab, he’s able to keep the distance and he’s real tall for the weight class, especially fighting Volkanovski. He’s going to have such a huge reach advantage. His jab is so sneaky and he’s able to load up his punches.”

After serving a two-year suspension following a positive EPO test in 2019, Dillashaw jumped straight back into title contention with a split decision win against Sandhagen at UFC Vegas 32. The former 135-pound king is anticipating a shot at gold once he’s recovered from knee surgery in early 2022.

While he prepares for a likely clash against the victor of Aljamain Sterling‘s championship rematch against Petr Yan at UFC 267, perhaps he’ll be receiving the help of the new featherweight champion, should Ortega emerge victorious this weekend inside the T-Mobile Arena.

Who do you think will have their hand raised at UFC 266? Brian Ortega or Alexander Volkanovski? 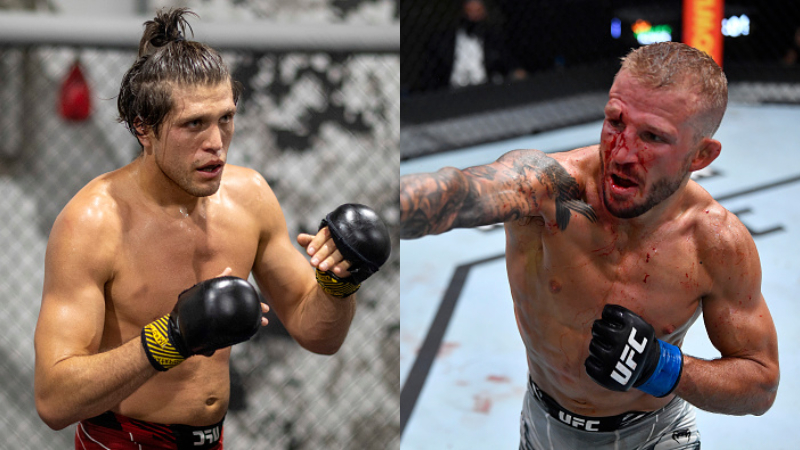