This past Saturday, UFC 266: Volkanovski vs. Ortega took place from the T-Mobile Arena in Las Vegas, Nevada. Here are some of the reactions from the MMA community to the main card results!

Good decision making in the fight. The only bad decision she’s made recently was to move into Shevchenko ‘s division.
She’ll have to hope Murphy pulls a shock upset or get ready to move back out.
Nobody’s likely to beat Valentina. Andrade wasn’t even close.
#UFC266

Wait a second, Andrade is FOUR years younger than Calvillo??? Bro WHAT

Could be considered a controversial stoppage. But all in all a good win. And good start

Why are all of you blaming Curtis Blaydes for that fight when Jairzinho Rozenstruik is right there, clinging to bottom half guard

Frozenstruik is back! Trains so much to throw literally 5 strikes per round, and calls himself a “kick-boxer”! 🤦‍️🤦‍️

Rozenstruik needs to change his fighting style. He’s way too passive. Maybe he feared the takedown. But he needs to start faster. Blaydes did what he needed to do to get the win. #UFC266

The crowd that were booing are the ones who made fun of blaydes for 8 months after the ko. I’m not a much of a fan of blaydes but respect

As he did against Gane, Rozenstruik struggles once on the ground or kept at distance with fear of the takedown. Blaydes does what he needs to do without making a statement that suggests he’ll be considered for a title shot anytime soon #UFC266

Rozenstruik needs to take some of the blame for that fight too. Was content just hoping Blaydes ran into his fist as opposed to pressing the action

The exciting part of the blaydes and rozenstruik is knowing Diaz and Lawler are next.#UFC266

Smart performance, idk what people expected, to rush in those powerful hands of Rozenstruik? I bet that you all wouldn’t after all those ridicule of Curtis against Lewis.

Not fond of the commentators looking at Nick Diaz through rose tinted glasses last night. He was absolutely out of his depths from the start and most of his punches did nothing to Lawler at all.

Didn’t stop them making it sound like he was giving it a good run.

Props to Lawler for being aggressive and staying on Diaz the entire time, but Diaz looked lost he obviously didn’t want to be there. Very weird fight

Just rewatched Diaz vs Lawler 2. I really feel like Nick brought out the best in Lawler that we’ve seen probably since he was a champion. You can really tell he wanted that win back & was prepared for war.

It’s so rare the rematch lives up to the hype. This one definitely did.

Diaz looked overweight and by the end of the second like he didn’t even want to be there. Very strange fight and even weirder ending.

Lawler looked better than ever and Diaz looked like a retired fighter turned coach who was questioning why he was fighting even before the fight. He made the most of it and put on a great show for us… Nothing but Love for the legends

Lawler looked fantastic last night. I still love Nick Diaz and have all the respect for him. It’s sad to see people turn on him so quickly for not continuing.

Let’s be honest. If Nick really wanted to fight came in proper shape and was really motivated for another run he would’ve beat the fuck out of Lawler. A sloppy out of shape Diaz who didn’t seem to care caught Lawler with a ton of shots.

All things considered that was pretty close to a best case scenario for Lawler-Diaz 2.

Anybody acting like Diaz vs Lawler was some spectacular war is just heavily influenced by bias. Fight was slightly entertaining & very depressing. Diaz quit mid fight & nobody even has the guts to say it. My night was ruined with Diaz/Lawler #UFC266

The funny thing is that even though Diaz looked terrible he was actually winning the exchanges against Lawler, again proving that Robbie is every bit as shot as Nick. If Diaz hadn’t given up he could’ve won that fight. Robbie was shelling up again and walking into shots. #UFC266

Maybe if Dana White paid his fighters properly you wouldn’t have to see fighters like Nick Diaz come back when they’re not ready just for a paycheck. I love what the Diaz brothers did for the sport but this was bad.

Just watched the Diaz/Lawler fight. All things considered, that was a pretty good showing from Nick after 6+ years out. The ring rust was real. I’d like to see him come back in much better shape at 170. Ending was weird as fuck though

Lawler/Diaz was better than anything I could have expected. Both of them showed just why they are so beloved as fighters. It was awesome while it lasted. Hope Nick is okay, and glad Lawler got to shine again.

Watching Diaz there was quite disturbing, clearly had no interest in being there & then couldn’t seem to string a sentence together in the post fight.

Amanda the power and valentina pure technique nobody in this generation will beat them outside of each other. The only reason Val dosent beat Amanda is because she is heavier than her.

Valentina Shevchenko is just too good. Time to move up in weight again and kick Amanda Nunes’ ass since she was just robbed on their second fight. Been saying it for a while now, she’s the best fighter regardless of [email protected]#ShevchenkoMurphy#UFC266

No other female is beating Valentina and Amanda Nunes

Valentina’s counters are unlike anything I’ve ever seen. It’s like she’s seen the fight on tape before. She literally knew what Lauren was gonna do before Lauren did.

She is going to be champ for as long as she wants.

Alexander Volkanovski is never going to lose another fight ever.

Insane fight.. I wanted Ortega to win so much, he didn’t but he pulled up the fight of the year. Put everything on the table, hell of a warrior. Just insane performance by both of these athletes.

Put some respect on Volk’s name! Beat 2 of the best featherweights in the world and overcame adversity and dominated the rest of the fight

This is twice he’s proved, yes he’s tough but he’s simply not ready for the top.

Max Dusted him like Thanos and Alexander just ate his soul.

Pretty sure at the very end of that hold Volk was only getting oxygen to his brain through that cut in his head.

Respect to both men. Volkanovski really is too good, One of the greatest Featherweights ever and Brian Ortega is as tough as they come. Give both men that bonus money. #UFC266

I could watch @alexvolkanovski vs @BrianTcity round 3 over and over and over again. The speed in which Ortega jumps on to those subs and Volk’s mentality to say “I’m not fuckin tapping”. This was a hall of fame round. Hall of fame fight even. Crazy.

You can catch the full UFC 266 results right here! 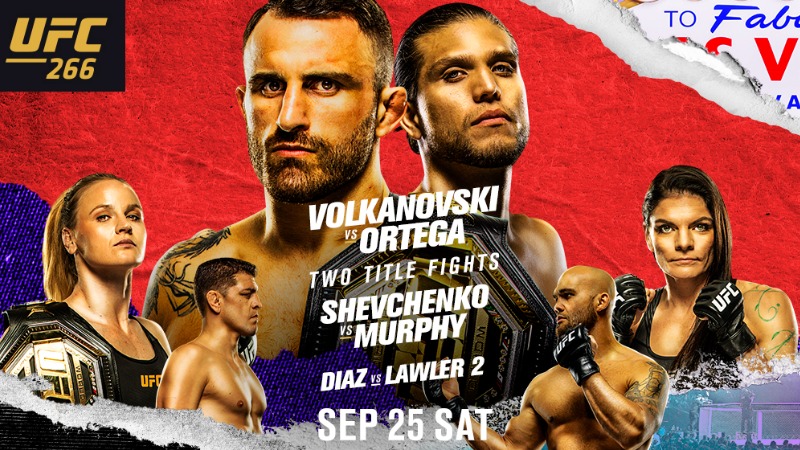