The Pulse of MMA: Fans React To José Aldo’s Victory Over Rob Font
published on December 6, 2021
curated and posted by BRWLRZ Team

In this installment of The Pulse of MMA, we look at the raw, unfiltered reactions from MMA fans to the result of UFC Vegas 44’s main event between José Aldo and Rob Font.

Last night at UFC Vegas 44, José Aldo picked up his third consecutive victory when he defeated Rob Font via unanimous decision. Font brought the fight to him but Aldo stood strong and struck back with more firepower behind his shots. You can check out the official scorecards from the bout below.

Judges Derek Cleary and Junichiro Kamijo gave all five rounds to Aldo while Sal D’Amato gave the third to Font. If you missed the action, you can catch our highlights from yesterday’s event right here.

After the bout in the Octagon interview, Aldo reiterated what he said leading into the bout, which is that he would fancy a fight against T.J. Dillashaw next. With Petr Yan and Aljamain Sterling on a collision course to settle their unfinished business, Dillashaw is unbooked and should be ready to return from knee surgery in early 2022.

Aldo’s peers have reacted to his win over Font last night, but what about the Pulse of MMA? Check out the raw, unfiltered reactions of what fans had to say about the UFC Vegas 44 main event below!

Font vs Aldo was such a good scrap, had me on the edge of my seat! #UFCVegas44

FOTN should be Aldo vs Font but i’m happy that they are giving to fighters on the prelims, they need that money more

Jose “King Of Rio” Aldo ran this town tonight. Fantastic performance, FOTY contender. Rob Font brought many great ideas and gutted through a hellacious fight. But Jose Aldo was not going to be denied tonight #UFCVegas44

Longevity in the sport doesn’t get praised enough. Newer fans need to subscribe to Fight Pass

To drop 10lbs to a new weight class to the deepest division in MMA and get unanimous decision wins over Marlon Vera, Pedro Munhoz and Rob Font (5×5) all while 17 years into your MMA career, 13 years at the highest level in the sport.

@josealdojunior is beating top 5 bantamweights after being in the fight game for more than 10 years! Let that sink in…. Most older fighters move up due to cutting weight becoming harder when u get older.. what a god damn legend you are @josealdojunior. #legend

Jose Aldo puts on an amazing performance to get the UD win against a game Rob Font.

He showed us all the tools in the arsenal. Motivation is not in question.

Much love to Font though. He refused to quit. He’ll be back & twice as hungry. #UFCVegas44 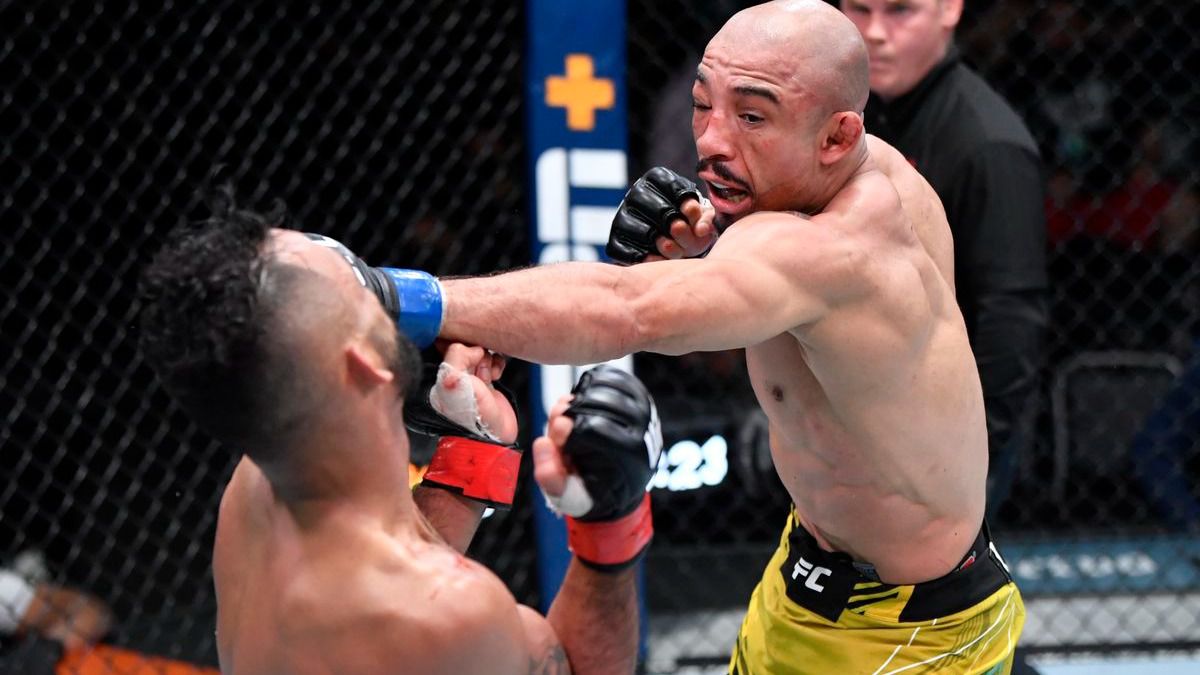