The Korean Zombie Embarassed After UFC on ESPN+ 38 Loss
published on October 19, 2020
curated and posted by BRWLRZ Team

The Korean Zombie is feeling the aftereffects of his one-sided defeat at the hands of Brian Ortega at UFC on ESPN+ 38.

As much damage as The Korean Zombie sustained at UFC on ESPN+ 38 against Brian Ortega in the event’s headliner, it isn’t the bumps and bruises from the bout that was hurting him the morning after the event. In fact, it wasn’t anything that Brian Ortega did but everything Zombie did not do and doesn’t even remember.

“I don’t remember the third, fourth and fifth rounds. I can’t remember, but it’s amazing to see how I’m fighting..haha.. I have to find out why I lost when I lose the game. Right, I’m just a fool. Ortega was so good… I just feel so embarrassed about me now. Still, thank you for supporting me a lot. I’m sorry.”

The Korean Zombie may have lost decisively, but there is no questioning the fact that he competed with enormous grit and resolve, truly living up to his moniker as a Korean Zombie who refused to die, even after a spinning elbow attack to end the second round that would have put a lesser man away on the instant. ‘

The Korean Zombie has been able to bounce back from disappointment in the past, including losing a featherweight title bout against Jose Aldo at UFC 163 after suffering a shoulder injury during the biggest fight of his life and also losing to Yair Rodriguez with one second remaining after being ahead on all the judges’ scorecards in what is #1 on many’s list of best knockouts in UFC history. So while Jung may be down on himself now, history has proven that this Zombie likely won’t stay down for long and will get right back to inflicting more carnage the next chance he gets.

Whom would you like to see The Korean Zombie fight next after losing to Brian Ortega in the UFC on ESPN+ 38 main event? 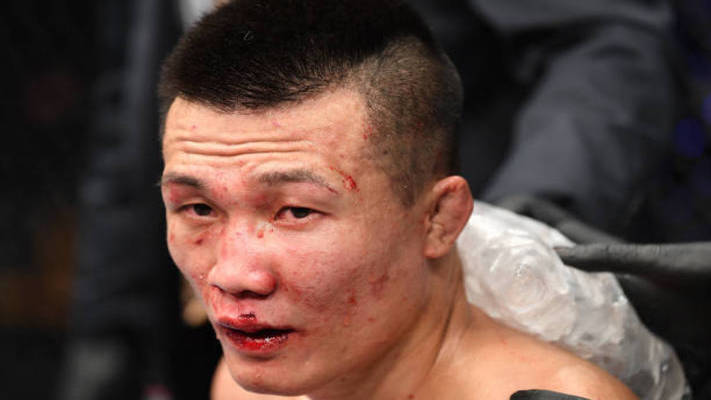