The Countdown To UFC 269: Oliveira vs. Poirier Officially Begins
published on December 6, 2021
curated and posted by BRWLRZ Team

The Countdown to UFC 269: Oliveira vs. Poirier has officially begun.

For the last time in 2021, it’s fight week, fight fans! This year’s lineup of pay-per-view fights culminates with the lightweight title bout many believe should have happened back in May to crown the new champion. That fight will now take place Saturday when reigning lightweight champion Charles Oliveira takes on Dustin “The Diamond” Poirier in the UFC 269 main event.

And in the co-main event, the consensus GOAT of women’s mixed martial arts, Amanda Nunes, defends her bantamweight title against Julianna Peña.

The UFC’s countdown video sets the stage for both title fights.

Dustin Poirier has closed out his rivalry with Conor McGregor, at least for the time being, and all that’s left to do now is realize his dream of being the undisputed UFC champion. Dustin Poirier embodies the grind, and in the Countdown video, we are reminded of the dues that have been fully paid to arrive at this opportunity.

“No matter who is on the other side, they will fold and fall.” – Charles Oliveira

Charles “Do Bronx” Oliveira has proven year after year that he is the definition of “kill or be killed.” In the Countdown video, the UFC chronicles the finishing ability of Oliveira, including the TKO that crowned him as the UFC’s lightweight champion and an immortalized Brazilian hero.

“I’m the one fight that she doesn’t want because she knows that it’s gonna be a long night.” – Julianna Peña

By now, the MMA world should be well aware of how badly Julianna Peña has wanted this fight. In case you forgot, the Countdown video reminds you of that. It also reminds viewers of something that may be lost in all the trash talk: the fact that Peña is a hardened OG of the bantamweight division who can become the first woman to go from Ultimate Fighter to Undisputed Champion.

“I just need one mistake from her. From that moment, I’m gonna capitalize and finish the fight.” – Amanda Nunes

Amanda Nunes has made one thing clear since her rise to the top of women’s MMA: place anybody in front of her, and the outcome will remain the same. That, of course, would be Nunes having her hand raised. In the Countdown video, Nunes also shares a specific weakness she sees in Peña’s game. Meanwhile, the champ says she is continuing to evolve and get better every single day.

UFC 269 takes place this Saturday, December 11, 2021, from the T-Mobile Arena in Las Vegas, Nevada. The main card for the event also includes appearances by former bantamweight champion Cody Garbrandt and rising star “Sugar” Sean O’Malley. The entire card is absolutely stacked from top to bottom. You can view the full UFC 269 lineup as well as all the viewing information here.

And without further ado, you can check out the full episode of UFC Countdown: Oliveira vs. Poirier below. 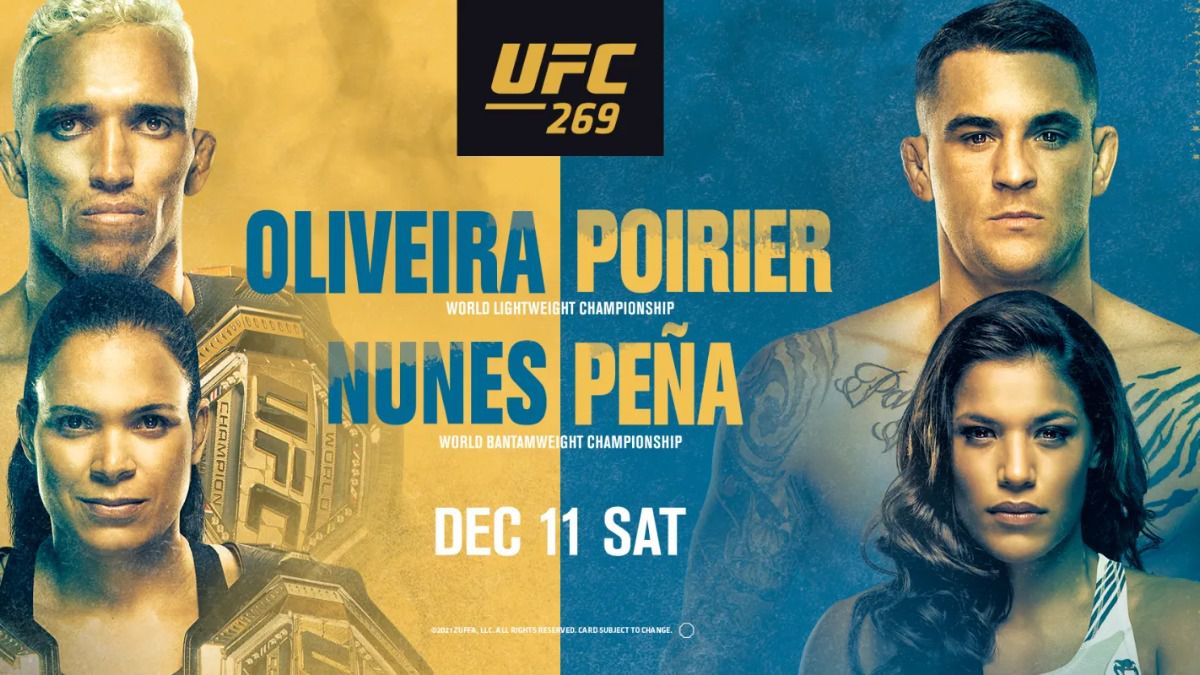