Taylor “Would Love” For Shields To Ditch MMA & Focus Solely On Boxing
published on January 3, 2022
curated and posted by BRWLRZ Team

Undisputed Lightweight Champion Katie Taylor has praised Claressa Shields for her venture into MMA but believes the unified middleweight titleholder should now focus solely on her boxing career.

Shields, a two-time Olympic gold medalist and the only boxer in history to hold all four major world titles simultaneously across two weight classes, tested the waters of mixed martial arts as part of the rising PFL promotion in 2021. Having built an unblemished 11-0 record in the squared circle, “T-Rex” looked to create similar success in the cage.

Last June, Shields got off to a winning start in her new sport, recovering from two dropped rounds to TKO Brittney Elkin in the third on debut. But while she was able to overcome her ground deficiencies in her first appearance, the 26-year-old was unable to do the same in her second outing.

At the PFL Finale in October, Shields suffered her first professional loss in combat sports. She fell on the wrong side of a split decision against Abigail Montes after failing to prevent her opponent’s takedowns and keep the fight on the feet.

Despite her first setback, most acknowledge the transition from boxing to MMA was always going to be difficult, and the likes of UFC Middleweight Champion Israel Adesanya have praised Shields for trying her hand at a new sport. It also seems the journey is far from over for “T-Rex,” who expects to return to the cage for her third appearance in 2022.

But one of her fellow pound-for-pound boxing stars Katie Taylor believes a return to MMA wouldn’t be wise. Speaking during an appearance on The MMA Hour, the Irish champion credited Shields for taking on the cross-over challenger. However, “KT” believes she should now streamline all her efforts towards her career in the ring.

“I definitely didn’t expect (Shields to fight in MMA). But I thought it was a fantastic challenge for her to take on because boxing and MMA are two completely different sports. It’s very, very hard for anyone in boxing to cross over because, obviously, we have no ground game.

“If anybody got me to the ground, for example, it would be a huge problem for me. I think obviously you always have a puncher’s chance maybe, but it’s a priority — it’s very, very hard to stay on your feet. So I think it was an admirable challenge for her to take on. But I would love for her just to focus on boxing now.”

Taylor’s plea for Shields to leave her MMA career in the past, for now at least, comes ahead of what looks to be a busy year in boxing for the “GWOAT.”

Shields was initially set to return to the sport to defend her middleweight belts against Slovenia’s Ema Kozin later this month. However, with the British Boxing Board of Control announcing the suspension of the sport in the UK due to COVID-19, the status of that clash, scheduled for Cardiff, Wales, is uncertain.

Beyond that, Shields looks set for a blockbuster undisputed middleweight showdown with England’s Savannah Marshall later this year. With exciting challenges ahead of her in boxing, Taylor believes her immediate future is best set in the squared circle and nowhere else.

“There’s a lot of big fights out there for her,” Taylor said. “The likes of Savannah Marshall, who’s a fantastic world champion fighter, and I think Savannah actually beat her as an amateur fighter, so that is a huge, huge, huge fight for them. It’s probably one of the biggest fights in women’s boxing.” (h/t Boxing Scene)

Do you agree with Katie Taylor? Should Claressa Shields focus on her career inside the ring? 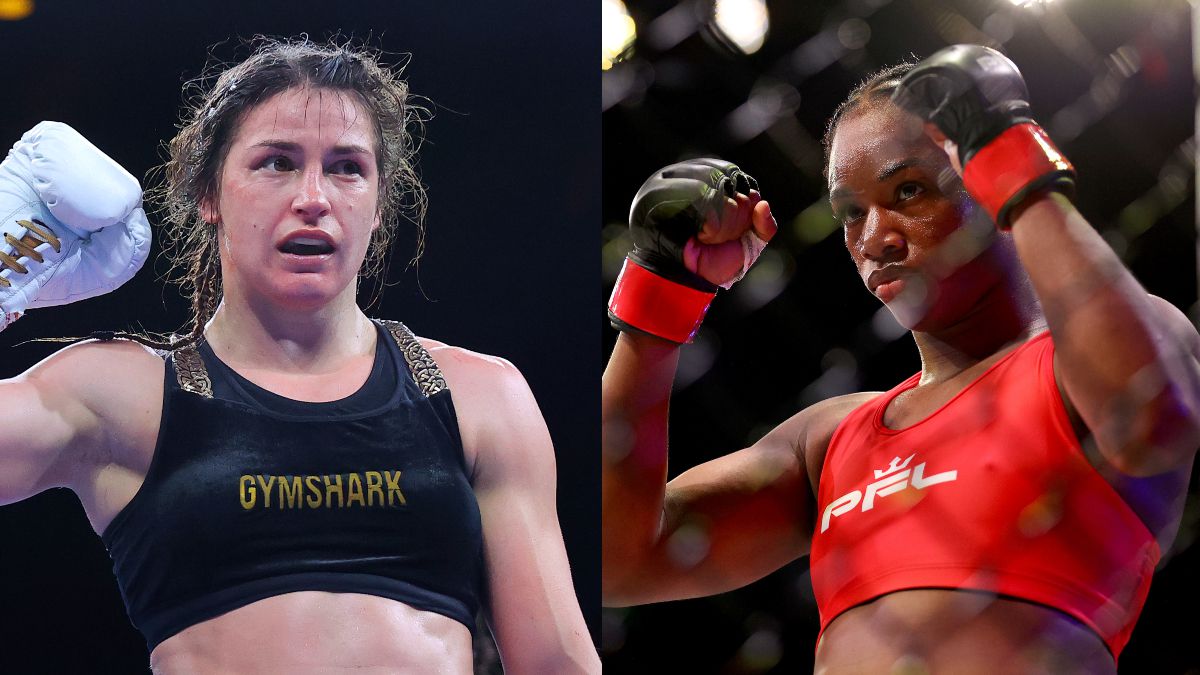