Miesha Tate has no sympathy for Aspen Ladd after her latest weigh-in mishap.

UFC bantamweight Aspen Ladd has had her share of weight-cutting struggles throughout her four-year UFC run. The latest issue took place this past weekend prior to her scheduled UFC Vegas 38 bout against Macy Chiasson.

Aspen Ladd almost fainted when trying to stand on her feet and raise both hands on the scale. (She weighed in at 137). Commission is now checking her condition and if she’s able to fight tomorrow. #UFCVegas38 pic.twitter.com/ycHF3HkPeE

As a result of this troubling trip to the scale, Ladd’s bout against Chiasson was canceled, which prompted Ladd to issue the following statement (h/t Yahoo Sports).

At this point it sounds like a broken record… But my fights off. I take complete and full responsibility for not making weight. It’s well documented that I’ve had issues with weight cuts in the past not just as a female but in general. There are times where you think that you do everything right and then mother nature comes into play but bottom line is you’ve got to prepare for anything and everything. I thought that I had. I wish that I had the knowledge and the experience of seasoned fighters yeah I’m nine and one, 10 fights in my professional career and it’s something that I’m getting better. That I should be better at, but I commit to be better at as I move forward.

I make no excuses only apologies to the UFC who has invested so much in me, to the matchmakers, to my opponent, to my fans and supporters, to my family, but most of all to my team. Who sacrifice so much for a chance at a win inside of an octagon. For a fight camp that normally last 3 months in this case 5 months comes down to 1 pound. I can only say I apologize and I have to do better. I’ll be better. There are no other options.. as I love this sport and I want to continue to do what I love and be the best… Again I’m sorry. I will be better!

The following day, Miesha Tate reacted to Ladd’s statement. Needless to say, the former bantamweight champion did not give her peer a pass for missing weight. In fact, she believes there was a visible element of deception at play from the 26-year-old.

It’s one thing to miss weight, it’s another thing to try and cheat the scale and use every excuse in the book to not weigh in properly. Everyone saw you cheat and still came in a lb over. I bet you were every bit of 139. https://t.co/VyOWcfTMCv

“It’s one thing to miss weight, it’s another thing to try and cheat the scale and use every excuse in the book to not weigh in properly. Everyone saw you cheat and still came in a lb over. I bet you were every bit of 139,” Tate’s tweet reads.

This isn’t the first time Aspen Ladd’s and Miesha Tate’s name has shared a headline. As recently as last week, we revealed that Ladd wanted to face Tate after UFC Vegas 38.

However, now that Ladd’s rebooked bout against Chiasson has been canceled yet again, there are many uncertainties about what is next for Ladd. And watching this cancellation unfold the way that it did, Tate may not be in any hurry to commit to a date with Ladd anytime soon. 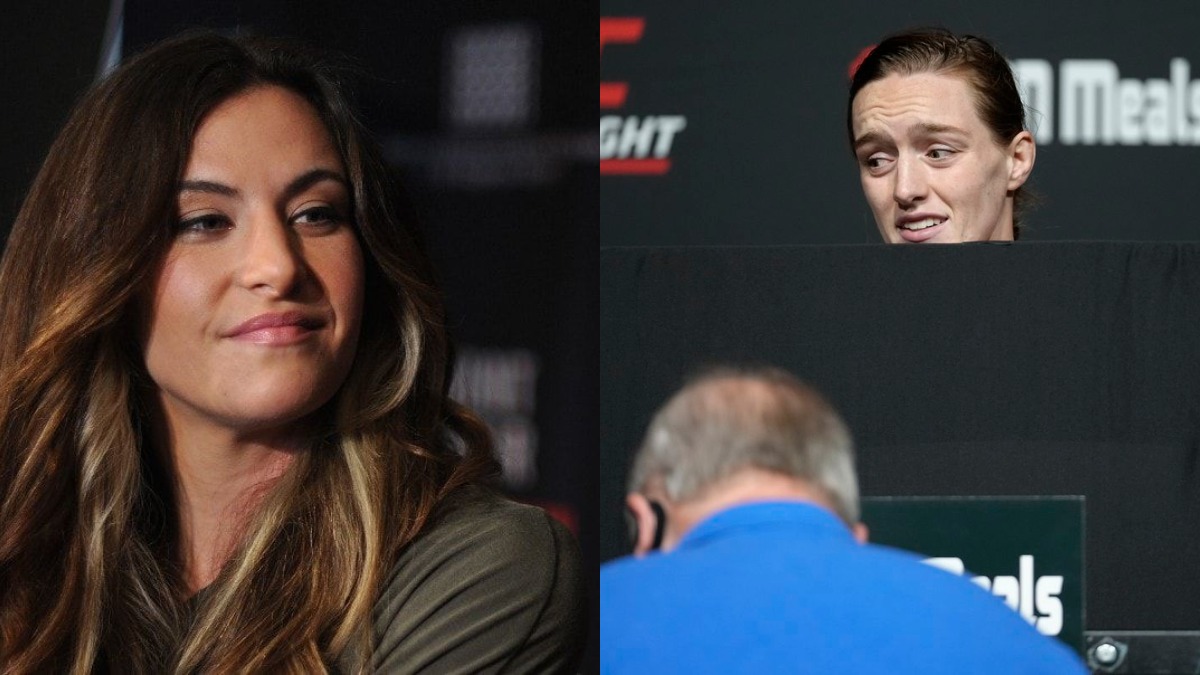