Sean Strickland has attempted to clean up some previously controversial remarks in a very Strickland-like fashion.

Sean Strickland has emerged as a strong candidate if not clear-cut choice for the most outspoken fighter on the UFC roster. By now, it is obvious that whenever there is a microphone anywhere near Strickland’s vicinity, the general public should expect the unexpected and brace themselves for the unhinged.

By now, most regular followers of MMA News have grown accustomed to Strickland’s wild remarks, but there was one particular story that made more headlines than the usual head-turning Strickland story.

Last December, Strickland stated that if he had a homosexual son, that would mean he has failed as a man. This statement was met with wide backlash, despite Strickland’s initial attempt to tamper down the controversy by saying he “supports gay men.”

LISTEN gay men are great, i support them and their choices. freedom! Gay guys have it made. Most gay guys I know are always happy. They all just get to hang with buddies all day and have sex.. us straight men, we’re fucked… we gotta do some serious work to get laid. Not fair

During a UFC Vegas 47 media scrum Wednesday, Strickland took another crack at clarifying his remarks, this after he described a reporter’s hair as “gay.”

“By the way, when I make fun of gays, dude, I fucking love gay men,” Strickland explained. “Gay men are awesome. Lesbians, not so much. Lesbians hate me. Lesbians look at me like the guy that hurt them; I’m not the guy, I’m not your father. But gay men, gay men look at me like they wanna fuck me, and I respect that. You know, they compliment me, they slide in my DMs, I get some dick pics every now and then; I respect that shit. So, I’m not homophobic.”

Controversies and off-color remarks aside, Sean Strickland is known for something else: being one of the best fighters in the middleweight division. At present, he is ranked #7, and that number would no doubt get a bump should he defeat the #6-ranked Jack Hermansson this Saturday.

If he does, you can once again expect more uncensored and uncontrolled comments from Strickland while he is in celebration mode, which is when “Tarzan” is in his most uninhibited state.

What do you make of Sean Strickland’s remarks on homophobia? 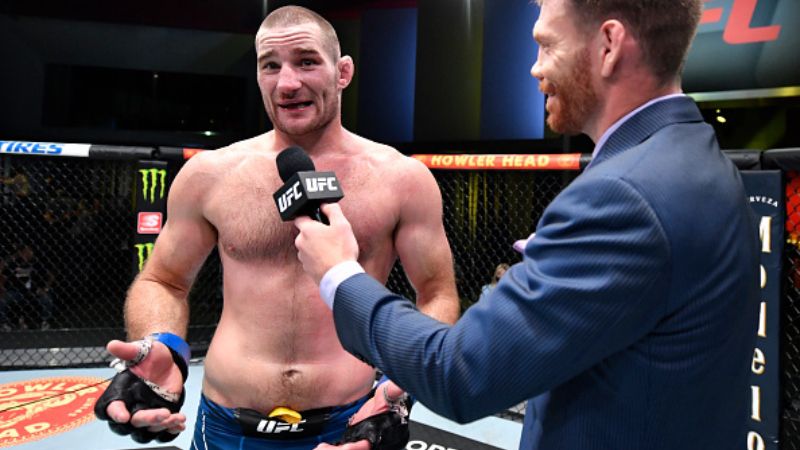