Sonnen: Peña Can Beat Amanda Nunes & You Guys Are Not Seeing It
published on November 24, 2021
curated and posted by BRWLRZ Team

Chael Sonnen believes Julianna Peña has the style to give Amanda Nunes a lot of trouble.

In the co-main event of UFC 269, Nunes is set to defend her bantamweight title against Peña. To no surprise, the champ is a heavy favorite, but Sonnen believes Peña’s style is a disaster for Nunes, which is why she can pull off the upset.

“Amanda Nunes is getting ready for the most likely upset of her entire career and I feel like you guys are not seeing it,” Sonnen said on his YouTube channel (via Sportskeeda). “I’m not predicting for you that Julianna Peña is going to beat Amanda Nunes, I am submitting for you that Julianna Peña is the most likely opponent of anyone Amanda Nunes has faced to get the jump on her. This is a stylistic disaster for Amanda.”

Peña is just 2-2 in her last four but is coming off a submission win over Sara McMann last time out. Prior to that, she was submitted by Germaine de Ranadamie after defeating Nicco Montano by decision to get back into the win column after losing to Valentina Shevchenko.

Although’s Julianna Peña’s résumé is not as good as Amanda Nunes’, Chael Sonnen claims Pena is the biggest threat Nunes has had.

“To get a win over Amanda, if you make it five rounds, you have won. A moral victory, but you have done something that no one else could and nobody thought you were going to do. If you lose this thing [fight] 4-1, they will put you on SportsCenter. If it goes 3-2, they are going to talk about rematching you. So, there’s a lot of victories aside from taking the belt off her waist. That’s how well respected Amanda is and I’m telling you right now that Julianna Peña is the biggest threat that Amanda has ever had.”

Whether or not Peña will actually pull off the upset is uncertain, but we will find out on December 11 at the T-Mobile Arena in Las Vegas.

Do you agree with Chael Sonnen that Julianna Peña can pose problems for Amanda Nunes? 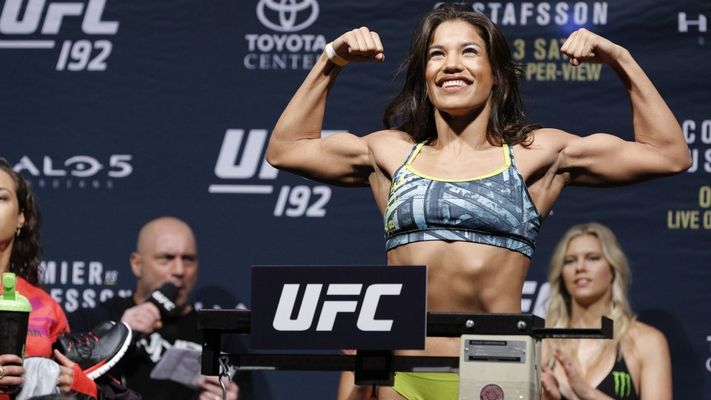