Shevchenko, who has defended her title six times, has only tasted defeat twice in the UFC. Both those losses came via the fists of Amanda Nunes. “The Lioness” is considered by many to be the GWOAT in MMA but Shevchenko doesn’t think Nunes is the queen of two divisions due to her technique. ”The Bullet” claims Nunes is the champ-champ simply because of her size.

“It’s not her style, it’s just she’s big and heavy,” Shevchenko told Joe Rogan in a recent episode of the JRE MMA Show.

Nunes hasn’t lost a fight in seven years. Her current streak has seen her submit and knockout multiple opponents including other notable names like Ronda Rousey, Cris Cyborg, and Meisha Tate. But according to Shevchenko, that’s just due to her being “bigger” than everyone else.

“Everyone has power. If we’re speaking about 135 weight class, everyone has a lot of power. But Amanda, I think she’s just bigger than anyone. What is her walking weight? 160? 170?”

Could We See Nunes/Shevchenko 3 In The Future?

With both women being so dominant in their respective divisions, a third fight could materialize down the road. Should that be the case, Shevchenko wouldn’t go out of her way to pack on bulk for the bout.

“I’m not gonna do anything special to lift up my weight. I don’t believe it’s gonna help. I believe it’s gonna be worse for the fighter. Because if in your whole life you (had a) certain body type, you know how to carry certain muscles — amount of muscles, and then suddenly, for the last two or three months, you start to carry way more,” she explained.

Shevchenko’s most recent defense was a thrashing of Lauren Murphy last month at UFC 266. With this being her sixth defense in three years, she’s quickly running through competitors in a slim division.

How do you think a third fight between Shevchenko and Nunes would play out? 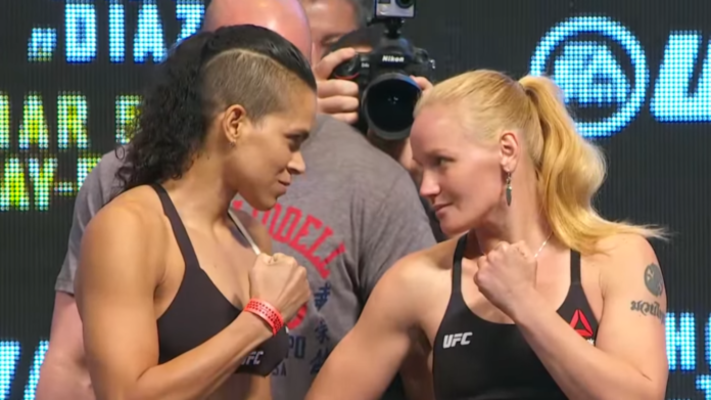