Sean O’Malley: Luke Rockhold Is A Douche
published on October 6, 2021
curated and posted by BRWLRZ Team

It appears Luke Rockhold has gotten under the skin of rising UFC bantamweight star Sean O’Malley.

According to O’Malley, he likes most fighters under UFC contract but recently admitted that he thought Luke Rockhold was a ‘douche’. The former middleweight champion is set for a showdown with the brash Sean Strickland at UFC 269 on Dec. 11 inside of Madison Square Garden, New York City, New York.

Rockhold’s opponent, Strickland, also admitted that the former champ’s arrogance was offputting. Following Strickland’s expletive-filled rant about Rockhold, fellow UFC fighter Sean O’Malley shared his opinion about the former middleweight champion as well. In the latest episode of Sean O’Malley’s podcast on YouTube, the bantamweight described why he took issue with one of AKA’s senior members.

“There’s not anybody in the UFC I don’t like. I take that back, Luke Rockhold’s a douche. Other than that, god, it sucks, I can’t say that because he could… it’s hard to say that because he can beat me up so hopefully I just don’t get in a situation where it’s me and him in a room and I’m like ‘I didn’t mean that Luke. Lucas, I just thought what you said was douchey,” Sean O’Malley said.

O’Malley claims that he might walk back his statements about Rockhold if they were ever trapped in a room together. After all, the 135-pound star understands the massive size difference between the two. “Suga” insists that Rockhold was drunk at a party and began pestering O’Malley’s dad about his son losing to Marlon “Chito” Vera.

“They were in Whitefish. Luke [Rockhold] was drunk and he kept telling my dad ‘Chito beat your son’s a**.’ My dad said Luke was super (buzzed) but he kept saying ‘Chito beat your son’s a**.’ Why would he be like that? Luke said (to my father) ‘Do you not know who I am?’ And my dad said, ‘You look familiar but I don’t know.’ So that probably p*ssed him off. I don’t know the whole story,” Sean O’Malley said in an earlier episode of his podcast.

Apparently, Sean Strickland and Sean O’Malley share their disdain for Rockhold. After the bantamweight admitted that the former champ tried to antagonize his father after O’Malley lost to Marlon Vera, his opinion on Rockhold has soured. Unlike O’Malley, however, Strickland’s trash talk with Rockhold will reach heights we don’t often see between two combatants on a marquee pay-per-view. 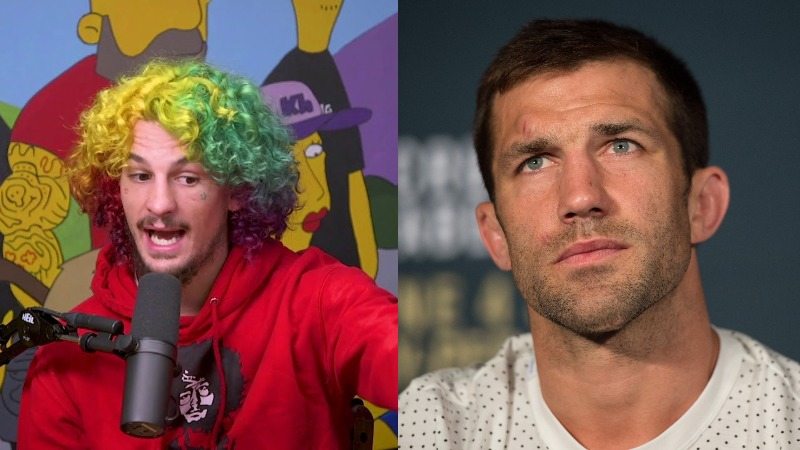