Scott Coker Says There is Interest From Boxing Promoters in Cris Cyborg
published on October 16, 2020
curated and posted by BRWLRZ Team

Scott Coker is absolutely interested in a cross over boxing match for Cris Cyborg against Katie Taylor. He and Match room Boxing promoter Eddie Hearn has had conversations about it but at the end of the day, Coker says it’s up to Cyborg to make it happen, although he does have one stipulation that may be a deal-breaker.

Cyborg successfully defended her title at Bellator 249 against Arlene Blencowe where she picked up a second-round submission over Blencowe, a two-time boxing Champion and seasoned mixed martial artist. It was the first submission win of her career but none of that matters if she moves to face the likes of Taylor in boxing.

When Coker addressed the questions of a move to boxing for Cyborg he said, “We’ve had a lot of boxing interest, and the promoters are starting to reach out and saying, ‘How can we put this together?’” Coker is aware that it is something Cyborg wants to do and added, “ If it’s important to Cris, we’ll do it.  So, it’s really going to be up to her and I’m all for it.”

However, when the hypothetical matchup between Cyborg and Taylor was called the female equivalent to Mayweather vs. MacGregor and Coker feels that crossovers like that should include “reciprocation” of the boxer coming over to MMA in order to be a true crossover. Coker feels Mayweather should have fought McGregor in MMA after their boxing match and Coker would want that to be part of any deal involving Cyborg going over to boxing.

Coker is aware his request might be a “deal breaker” but as a fight fan and marital artist himself, it seems only fair. Coker added, “ If Eddie Hearn wants to see who’s the best combat female, combat star and capability then maybe he should think about it.”

Will this deal happen or is it just fun to talk about? 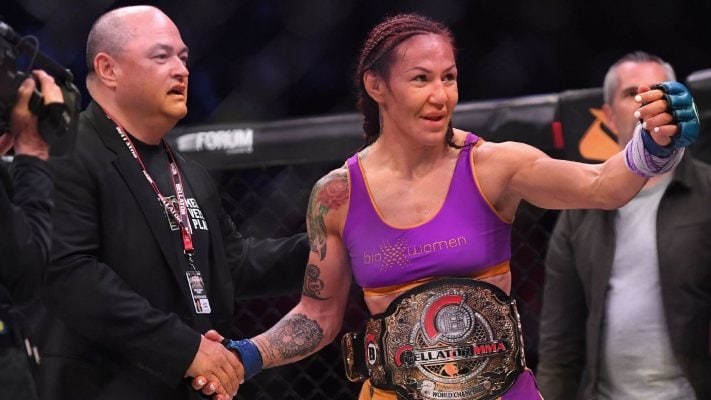