Scott Coker Is Keen To Build Gable Steveson Into An MMA “Megastar”
published on September 26, 2021
curated and posted by BRWLRZ Team

Despite Gable Steveson‘s WWE signing, Bellator CEO Scott Coker is still keen to have a conversation with the Olympic gold medalist, suggesting he wants to make the 21-year-old into an MMA “megastar.”

Steveson became the hottest free agent in combat sports in the summer. At the delayed Tokyo 2020 Olympic Games, the Indiana native claimed the top spot of the podium in freestyle wrestling after defeating three-time and reigning world champion Geno Petriashvili. He also beat defending Olympic champion Taha Akgül earlier in the competition.

Following his success in Japan, Steveson’s stock rose exponentially. Riding it as well as he could, the surging combat star embarked on tour around various promotion’s that were after his signature. That included an appearance at Bellator 265 last month.

Ahead of the event, it was no secret that Coker wanted to bring Steveson to his promotion. Despite the competition for the free agent, the 58-year-old suggested Bellator was the best home for the wrestling sensation. He also revealed that contact had already been made with Steveson’s management team.

In the end, it was the WWE who landed the heavily sought after signature. Following an appearance at WWE SummerSlam, as well as a picture with chairman Vince McMahon, it seemed a move to professional wrestling was inevitable. But despite the battle for Steveson seemingly being completed, Coker isn’t ready to give up yet.

In a recent interview with The Schmo, the Bellator kingpin questioned whether Steveson’s WWE agreement prevented him from competing in MMA. The South Korean-born promoter suggested a conversation with the future star is needed in order to establish whether Bellator can have the opportunity to make him into a superstar.

“Yeah, I mean, listen, we would love to have another conversation with him. I’m not sure what his obligations are now with pro wrestling after he finishes collegiate wrestling, so we’ll have a conversation with him. But yeah, if he’s available to do both, we would do it in a second because I think we have some great, fun matchups here. And listen, we are very good star-builders and star-identifiers. I think this kid’s gonna be a star. I think we have a great program to build him to a megastar that can really fight in MMA. But it’s gonna be up to him.”

Despite also receiving interest from the UFC and the Minnesota Vikings, Steveson followed in the footsteps of Brock Lesnar and Kurt Angle, putting pen to paper on a deal with professional wrestling’s biggest company.

While his immediate future may lie in the WWE, it remains to be seen whether Steveson will try his hand in the Octagon once his stardom has grown even more.

Do you think Gable Steveson should begin a career in mixed martial arts with Bellator MMA? 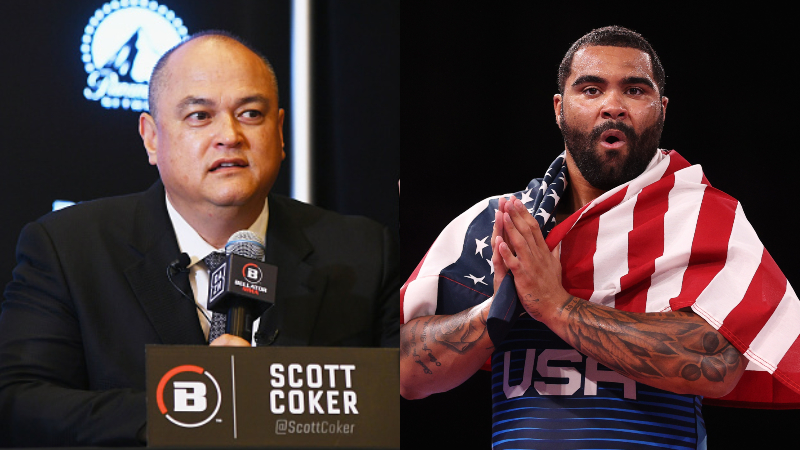