Poirier Shares Argument For Why UFC 257 Main Event Should Be For Title
published on December 27, 2020
curated and posted by BRWLRZ Team

Dustin Poirier has no idea what the future holds for the lightweight title picture, but what is clear as day to him is why it would make sense for his UFC 257 fight against Conor McGregor to be for the championship.

Khabib Nurmagomedov’s sudden retirement following his victory at UFC 254 left a lot of unanswered questions about what would happen to the lightweight championship. Despite retiring, Nurmagomedov is still listed as the official UFC lightweight champion, and Dana White intends to do everything he can to see to it that it stays that way.

In the opinion of #2-ranked lightweight Dustin Poirier, Dana White’s efforts to persuade Khabib to end his retirement will be in vain, so a title fight between him and McGregor could crystalize the cloudy title picture.

“I don’t know what’s gonna happen,” Poirier said in an interview with BT Sport. “I feel like Khabib’s a guy of his word. If he says he’s retired, he’s most likely retired. Number 2 is Gaethje, I got a win over him. I feel like me and Conor could potentially be for the belt.

“I’m a former interim champion looking to get some gold back around my waist,” Poirier continued. “Conor is a former undisputed world champion in the lightweight division. Both of our last defeats were to the current/’retired’ world champion. So I don’t know.”

However logical and sound the argument may be for a Poirier/McGregor title fight, ultimately the decision falls on Dana White and the UFC brass. So Poirier is remaining locked in on what he can control, and that’s the outcome of the UFC 257 main event.

“There’s a storyline you could draw with a lot of these fights, and I just try not to play too much into it because at the end of the day, January 23, I’m fighting 25 minutes with one of the best guys in the world, and I just focus on that,” Poirier said. “Everything else is just noise.”

Do you believe Dustin Poirier vs. Conor McGregor should be for the official lightweight championship?

This article first appeared on MMANews.com. 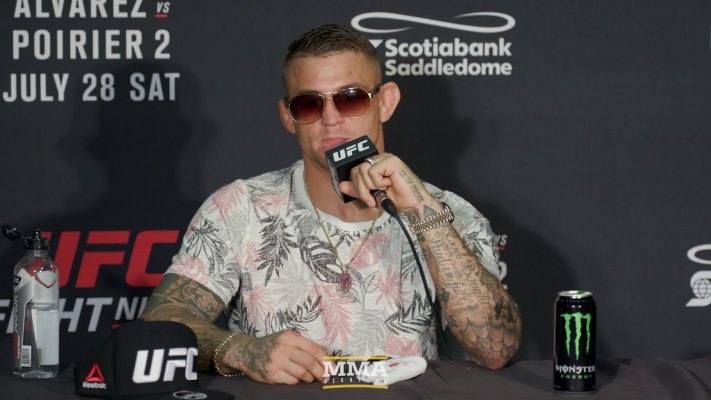