Known as the ‘Pink Suit Guy,’ one of Conor McGregor‘s latest enemies has taken another shot at the Champ Champ.

At the UFC 264 pre-fight press conference back in July, McGregor was forced to contend with more than just Dustin Poirier on stage. After Josh Cohen, AKA “The Pink Suit Guy” went on the attack, it was clear from the beginning that Cohen’s intentions were to befuddle the former double champ during one of the most publicized pressers in UFC history.

At the UFC 264 pre-fight press conference, Josh Cohen draped in his slick pink suit grabbed every eyeball in the vicinity after laying this one on the Irish superstar.

“Conor [McGregor], question for you. you have won exactly one fight since Barack Obama was president… over a fighter [Donald Cerrone] who has zero wins over the last six fights. This man [Dustin Poirier] sent you to a place where time doesn’t exist six months ago. Why should anyone expect anything different on Saturday?” Cohen shouted.

McGregor would lose the fight by TKO and injure his leg in the process. Initially, it seemed McGregor would be able to nurse his tibia in peace following the fight. However, in a recent social media post, Josh Cohen is back and ready to go after the Irish superstar once again. Cohen shared this short message with McGregor.

“On this National Sons Day, I want to wish a very happy Son-Day to my son; @thenotoriousmma. Please have a positive, and constructive day. And please, don’t get arrested. Love you son,” wrote Josh Cohen.

While Conor McGregor has not competed since July, his name continues dominating the news cycle. Following his TKO doctor-stoppage loss to Dustin Poirier in their third encounter, McGregor remains committed to rest and recovery in hopes of one day making a successful UFC return.

How do you think a fight between The Pink Suit Guy and Conor McGregor would go? 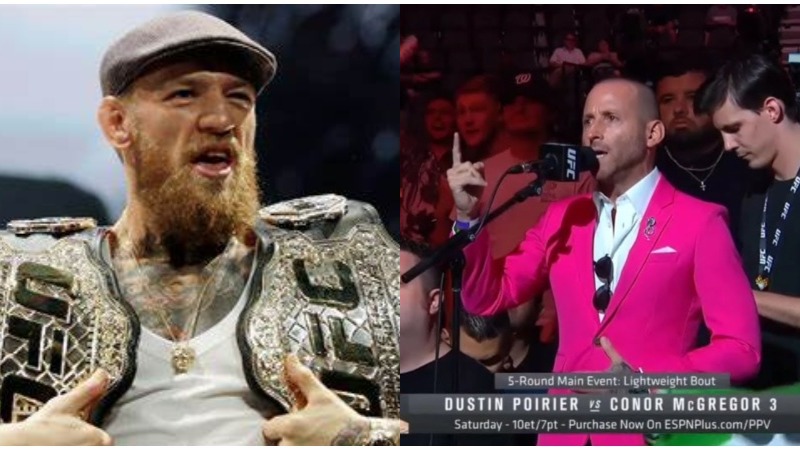