[PHOTO] Tyron Woodley Got The “I LOVE JAKE PAUL” Tattoo
published on September 27, 2021
curated and posted by BRWLRZ Team

Tyron Woodley has done it. He has gone ahead and gotten the “I Love Jake Paul” tattoo…sort of.

Leading into their August 29 boxing match, Tyron Woodley & Jake Paul made a handshake agreement. The loser would get a tattoo professing their love for the winner of the fight.

During fight week, Jake Paul made it abundantly clear just how seriously he was taking the bet when he flew in tattoo artist Tatu Baby to do the honors of branding the loser immediately after the fight. Things got a bit more complicated once Paul was announced the beneficiary of the split decision.

While Paul was having his post-fight interview in the ring, Woodley interrupted the YouTuber to demand a rematch. After both Jake & Logan Paul rejected Woodley, Jake then amended their original agreement. Now, if Woodley got the tattoo immediately, that would guarantee him the rematch he was asking for. The two shook on it, and that was that.

Tyron Woodley Gets The “I Love Jake Paul” Tattoo

After a tense wait, Paul decided to yank away the rematch agreement from Woodley. His reason for doing so was because “The Chosen One” chose to wait too long to follow through on his end of the deal, so now the buzz around the fight had died.

Woodley then promised to get the tattoo over this past weekend, and he has apparently done so based on an Instagram post published Monday.

“I love you son. Now come and get this ass whippin cause I heard you been talking back to your elders. @jakepaul#ManOfMyWord WHERE YOU AT!? Inked by celebrity painter & tattoo artist @rubiartista“

Based partly on Woodley tagging of the tattoo artist Rubia Santana, it appears to be an authentic permanent tattoo. Paul requested the tattoo be placed on Woodley’s thigh. He also laid out the specific guidelines for Woodley to follow for the tattoo. You can be the judge on if “T-Wood” has met them or not.

5. Has to be visible with shorts and shirt on

5. Has to be visible with shorts and shirt on

Although Jake Paul claimed that he moved on from the rematch, his top choice for his next fight, Tommy Fury, also failed to live up to The Problem Child’s demands. Paul made it clear that his $1 million offer to Fury was a final, “take it or leave it” one, and Fury recently explained why he has left it.

Thus, maybe Woodley’s timing turned out to be impeccable after all, with the former UFC champion looking to capitalize on Fury’s risky hardball negotiations.

We will keep you posted on whether Jake Paul finds this tattoo to be satisfactory enough to move forward with the rematch, so be sure to keep it locked on MMANews.com! 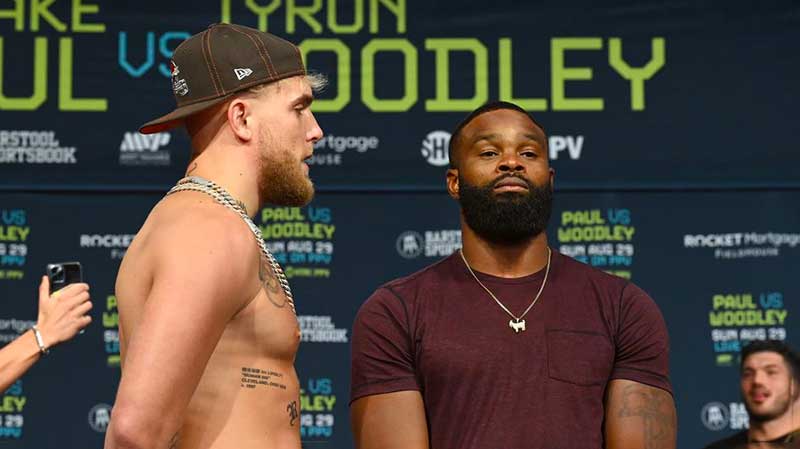