Petr Yan Is Unsatisfied With “Interim” Label On Sandhagen Fight
published on October 1, 2021
curated and posted by BRWLRZ Team

UFC bantamweight Petr Yan isn’t satisfied with fighting for an interim title at UFC 267, and believes Aljamain Sterling should be stripped of the title.

Yan was originally preparing for his chance at redemption at next month’s non-pay-per-view numbered UFC event. Having waited for Sterling to recover from neck surgery following their UFC 259 clash, the rivals looked set to collide on October 30 in Abu Dhabi. However, after not being medically cleared due to his ongoing recovery from neck surgery, “Funk Master” was forced to withdraw from his first title defense.

Soon after the collapse of the title fight, it was announced that #3-ranked contender Cory Sandhagen will be replacing Sterling and fighting “No Mercy” for an Interim UFC bantamweight Championship.

Despite keeping his place on the card, and having the chance to leave the Etihad Arena with some form of 135-pound gold, Yan isn’t totally satisfied with how things have played out. The former champ remains disappointed that he’s not fighting for the undisputed title. However, he’s happy to be returning to action for his fans.

“To be honest, I am not satisfied that it will be the fight for the interim champion’s title, but this is the UFC policy and I’m not going deep into it,” Yan said. “I am glad that I’ll be able to appear [in the octagon] and do what I can do because many people are waiting for my bout.” (h/t Tass)

Yan also spoke about Sandhagen. The 28-year-old is aware of the challenge “The Sandman” presents, and believes he’s a solid replacement for the title fight.

“Sandhagen is a decent opponent for the title fight, because he is a very dangerous and a tough competitor and showed an outstanding fight against Dillashaw. Yes, he lost his fight, but TJ is now recovering from a surgery and that is why Cory was given a chance”

Yan, who debuted in the UFC in 2018, reached the bantamweight mountaintop on Fight Island last July. After victories over John Dodson, Jimmie Rivera, and Urijah Faber, the Russian secured his place opposite former featherweight king José Aldo in a fight for the vacant 135-pound belt. In a brutal fashion, “No Mercy” finished the Brazilian legend in the fifth round with some vicious and relentless ground-and-pound.

While many had been expecting a period of dominance on the throne, Yan dropped the title in his first defense. Despite appearing to be comfortably on his way to a win against Sterling at UFC 259, the 28-year-old delivered a knee to his opponent’s head while he was grounded. The move resulted in Sterling becoming the first champion to be crowned via disqualification in UFC history.

After months of back-and-forth, the anticipation and animosity for their rematch is certainly higher than it was ahead of their first clash back in March. Sadly, we’ll be waiting a little longer for the pair to settle their score inside the Octagon.

What do you make of the interim title booking between Petr Yan and Cory Sandhagen? 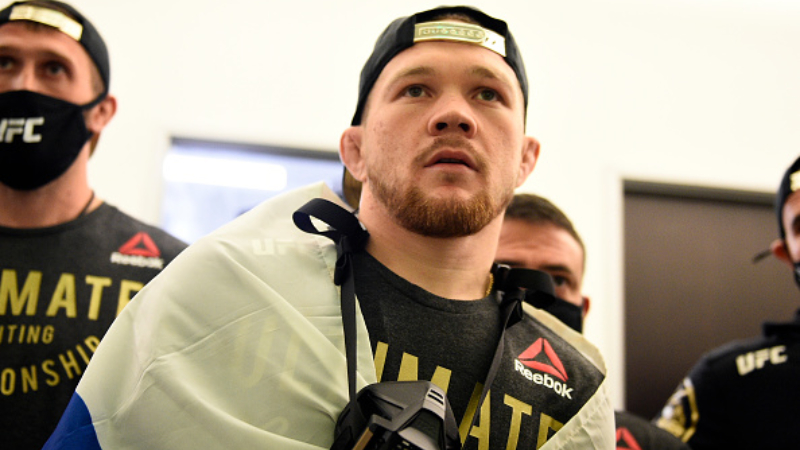