Pimblett burst onto the scene as a highly-touted prospect last year with an impressive debut performance. After signing with MMA’s premier organization following a successful career in the renowned Cage Warriors promotion, where he held the featherweight title, “The Baddy” made his first appearance in the UFC Vegas 36 main card opener last September.

Despite facing early adversity against Luigi Vendramini, which saw him appear to be rocked by a clean right hand, the Liverpool native recovered well to make good on his pre-fight promise of a first-round finish. With an onslaught of punches late in the opening frame, Pimblett slumped his Brazilian opponent against the cage.

As well as a memorable first performance in the Octagon, Pimblett made his presence in the 155-pound weight class further known shortly after with an entertaining post-fight interview.

For Pimblett, the success he’s beginning to realize is no surprise. He’s always believed it was his destiny to find glory on the regional scene, make his way to the UFC, and surge up the promotion’s ladder.

While he’s certainly still early into his UFC tenure, Pimblett is not shy about making his visions and ambitions clear. As well as a 3-0 record in 2022, “The Baddy” has his sights set on main-eventing a UFC card at the home of Liverpool Football Club, Anfield Stadium.

During a recent interview with ESPN MMA, Pimblett discussed his ultimate aspiration on MMA’s biggest stage, suggesting it’s likely to take place in two or three years’ time. While he acknowledges he’s not yet in a position to make demands, the Liverpudlian expects to be walking out in front of up to 80,000 of his own people after making his way towards the lightweight rankings.

“That’s happening. I’ve said it. People were asking me on me Twitch last night, people kept saying, ‘It’s gonna be like a UFC Liverpool (like in) London, why don’t they just do it in the Echo Arena?’ And I’m like, ‘Because it’s too small.’ I filled the Echo Arena out on me own, for Cage Warriors, never-mind with the UFC name attached to it and all the high-profile fights fighting on it, like (Darren) Till, Molly (McCann), and (Tom) Aspinall. It’s gonna need a football stadium.”

To give some context to how much he wants the Anfield main event to happen, Pimblett was asked whether he’d choose that or a title-winning performance in the UFC. For the 27-year-old, the answer was simple: the option that creates the biggest legacy for himself in the city of Liverpool.

“I’d probably pick Anfield (over a UFC title). Because that’s for my people. That’ll be my people there watching me… Obviously, I’m in this to become a UFC world champion. I’m in this sport for the legacy; the name you leave behind. I’m not really in it for the money. I’m in it for the legacy and what I leave behind. But I think I’d leave a better legacy in my city if I headlined at Anfield and won a fight, rather than winning a title abroad. So I’d rather do that for my own people.”

While he’s certainly a few wins and a few jumps up the lightweight ladder away from main event status, not least in a stadium the size of Anfield, Pimblett will be hoping to take the next step towards it when he enters the Octagon for the second time and the first time in 2022.

While an opponent is yet to be announced, Pimblett expects to fight on the March 19 UFC Fight Night card, an event expected to mark the promotion’s return to London, England. A recent back and forth on Twitter suggested the Englishman may be matched up with Jared Gordon.

Do you think Paddy Pimblett’s dream of headlining a UFC event at Anfield Stadium in Liverpool can come to fruition? 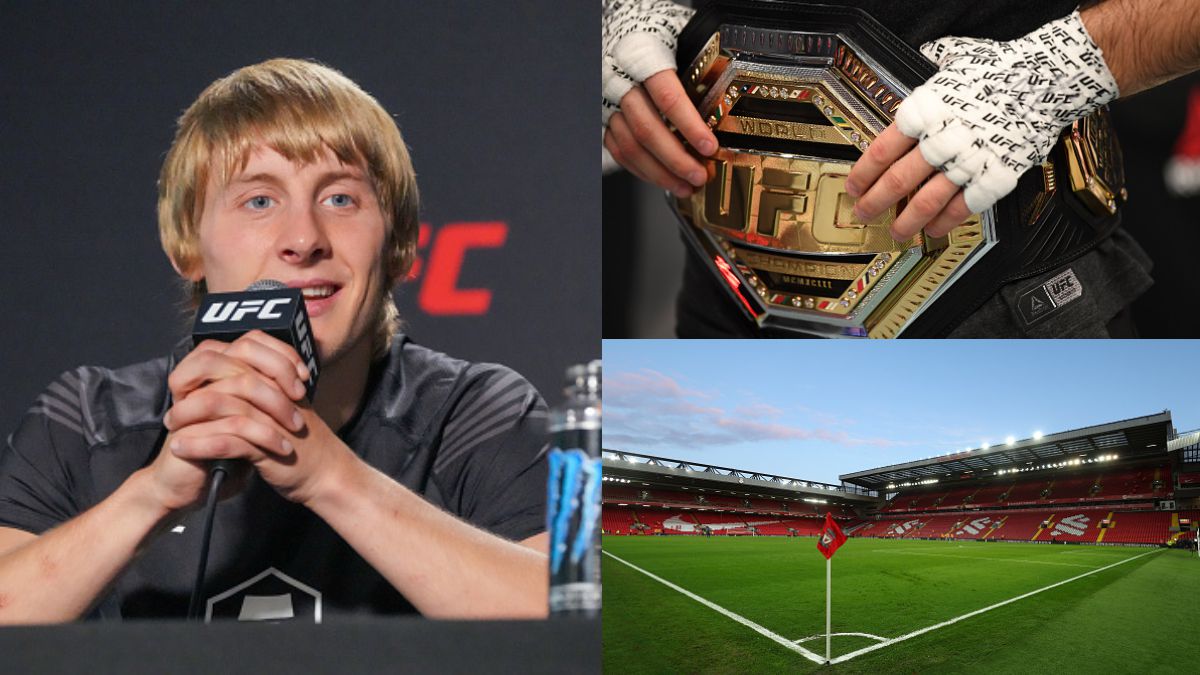