Oliveira: On Dec. 11, We’ll Be There To Prove Who Is The Best
published on December 4, 2021
curated and posted by BRWLRZ Team

The UFC’s final Pay-per-view of 2021 looks to end the year with a bang. The card features some rising prospects, a welterweight banger, and a women’s bantamweight title fight. In the main event of the evening, Charles Oliveira will try to keep the gold around his waist when he meets #1-ranked, Dustin Poirier.

Poirier has been sitting near the top of the division for the last three years. He holds wins over Justin Gaethje, Max Holloway, Conor McGregor, and Eddie Alvarez in that time. So, for many, it makes sense that with Khabib Nurmagomedov out of the picture, Poirier has a good chance of obtaining the lightweight title. In the meantime, many people also believe that Oliveira has not been receiving his full respect as the undisputed champion.

Oddsmakers have the Louisianian as a slight favorite heading into the title fight. Oliveira, though, sees UFC 269 going differently. The submission ace detailed his prediction for the bout in a recent interview with MMA Fighting.

“On [December] 11, we’ll be there to prove who’s best and who’s not the best,” Oliveira said. “There’s not much to say. We’ll only know when we face each other. I trust myself, I believe myself. I think I have way more weapons than him. All you guys that think [he’s No. 1], watch his last fight and watch my last fight, see what I’m good at and what he’s good at, and match it all up to see what happens.

“Strikers took him down way too easily, and you know what happens if I take him down. If he trades on the feet with me, you know I’m hitting hard, brother. It will be fire on the 11th. I have firepower in my hands, I have my jiu-jitsu. I respect him a lot, but I want to remain champion, I want to keep this belt here. I couldn’t care less what others say or criticize. It’s about time I take all that inside my head and look at what people say on Instagram.”

While Poirier is a slight favorite at the time of writing, the money could turn the odds as bets come in the next couple of weeks. Oliveira has had issues with durability and weight cuts in the past but has found his stride the last half of his UFC career. The champion is currently on a nine fight win streak, with eight of those victories coming by submission or knockout.

His last outing saw “Do Bronx” capture UFC gold when he rallied from the brink to knock Michael Chandler unconscious at UFC 262.

Who do you think will win next Saturday between Dustin Poirier and Charles Oliveira? 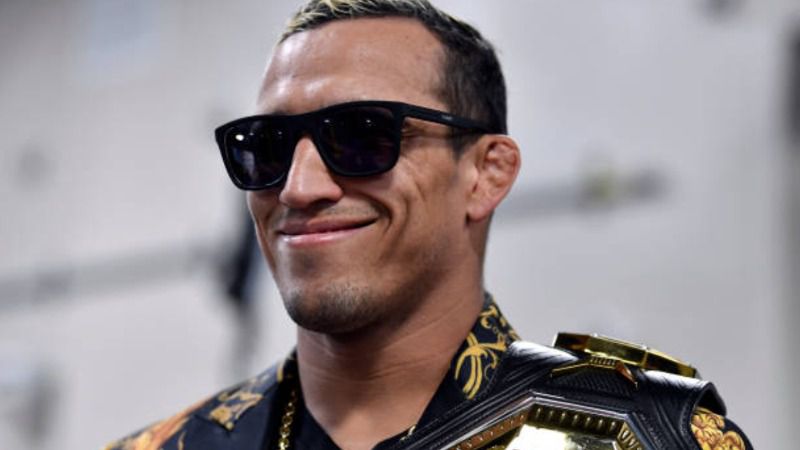