April 10 will feature a major strawweight bout between the streaking Mackenzie Dern and the returning Nina Ansaroff.

As reported by ESPN on Monday, there is a verbal agreement in place between Nina Ansaroff and Mackenzie Dern to fight on April 10. As one strawweight is on her way up in Mackenzie Dern, another strawweight is on her way back in the #5-ranked Nina Ansaroff. Either Dern will have increased her winning streak to four at the conclusion of this bout or Ansaroff will remind the world that she is still a relevant presence near the top of the strawweight rankings.

Mackenzie Dern has been one of the strawweight division’s brightest prospects even prior to her signing with the UFC in 2018. Since entering the promotion, she has turned out an impressive record of 5-1, with her only loss coming to Amanda Ribas in 2019. Since this loss, Dern has bounced back with three consecutive wins, most recently over Virna Jandiroba at UFC 256. The 27-year-old has set her sights on breaking records in the UFC, and the best way to go deeper down that path is to win a world championship. If Dern beats Ansaroff, she could very well be in the top 5 of the division and knocking on the door of a potential title shot.

Nina Ansaroff has been sidelined after giving birth to her daughter in September.  Nina Ansaroff earned her #5 ranking by going on a four-fight winning streak before falling to the undefeated Tatiana Suarez in 2019. Though Ansaroff was unsuccessful in this most recent bout, she was able to have more success against Suarez than anyone else before her. Ansaroff will return after being away from the sport for more than a year to face another, albeit very different grappler in Mackenzie Dern.

The April 10 Fight Night currently does not have a main event or any other fight announced for the card.

What is your prediction for this strawweight bout? Does Mackenzie Dern make it four in a row or does Nina Ansaroff return with a victory? 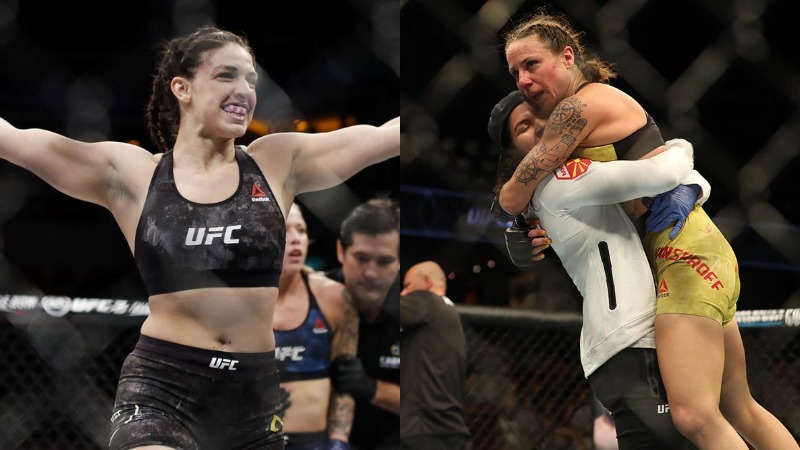