Returning UFC legend Nick Diaz has revealed the impact his brother Nate’s defeat to Leon Edwards at UFC 263 had on his focus and preparation ahead of his own return.

While Nick gets set for his comeback this weekend at UFC 266, Nate is on the hunt for his second opponent of the year. The younger Diaz sibling entered the Octagon for the first time since 2019 earlier this year at the June pay-per-view. Against #3-ranked welterweight contender Leon Edwards, the 36-year-old featured in the UFC’s first non-title and non-main event five-round fight.

Despite being beaten and bloodied for the best part of 24 minutes, a late final-minute flurry brought the fans to their feet and nearly saw a remarkable comeback victory for Diaz. In the end, it was “Rocky” who took home a comfortable unanimous decision on the scorecards.

While his brother put on an entertaining display and maintained his reputation as a fan favorite, Nick Diaz has revealed the negative impact the result had on his own focus and mindset. During an interview with ESPN MMA’s Brett Okamoto, Nick said that his brother’s fight added more stress to an already hard-going training camp.

“Since I’ve had this fight coming up, I’ve been under a lot of stress, yeah. It has not been an easy-going training camp. Because I haven’t fought for a long time for one; and then for two, things just didn’t go my way. Watching my brother fight was hard. That was really hard for me to do. I didn’t expect it to be like that. I wasn’t really ready to leave what I was doing at the time, and it just kinda made me look at things differently after that. I’m a lot different now than before I saw that fight.”

Diaz added that, in hindsight, he should have stayed away from the event and focused on his own preparation. However, given the relationship he has with his brother, that would have been easier said than done.

“Just the timing. It was the wrong time for me to be in there watching that, all up in the mix like that real quick…I wouldn’t even have gone. I would’ve stayed away and focused on myself. But I didn’t know any better. I was doing what I always did. And then going back in there with my brother, it just put my head right back in it and I was like, ‘Oh, wow.’ It was a lot for me to deal with…being away for five years and coming back and seeing that? That was really something new. It really kinda knocked my block off. I took harder punches watching that than I ever did in sparring or any fights. It’s my baby brother, you know? It’s hard to watch him fight.”

After Nate’s loss to Edwards, Nick will be hoping to be more successful when he enters the Octagon against Robbie Lawler this Saturday. Like his brother’s recent outing, the 38-year-old will fight in a rare non-title and non-main event five-round clash.

Lawler and Diaz first met at UFC 47 in 2004. In a rematch 17 years in the making, Diaz will be targeting a replica of the second-round knockout he secured over “Ruthless” towards the start of the century. But despite being on a four-fight losing skid, Lawler has remained active across the last decade and is a former UFC Welterweight Champion.

After a late weight class change forced by the Diaz camp, it remains to be seen how either man will perform given the late move to middleweight.

Who do you think will have their hand raised at UFC 266? Nick Diaz or Robbie Lawler? 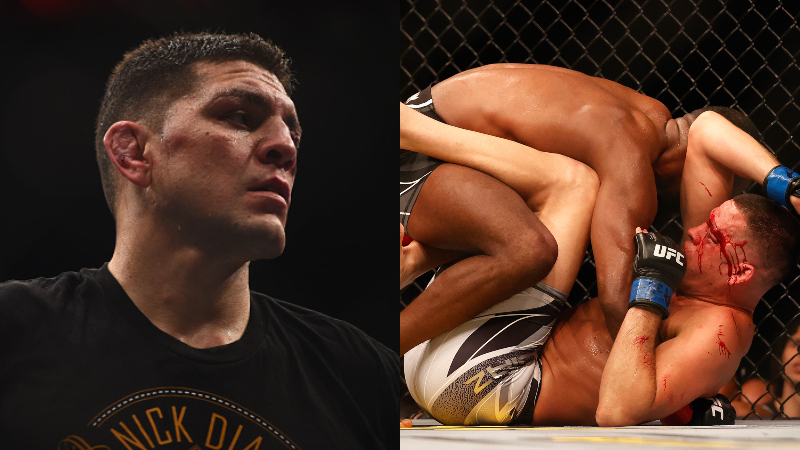