Ngannou: I Looked At Gane In The 3rd Round & Saw My 2018 Self
published on February 5, 2022
curated and posted by BRWLRZ Team

UFC Heavyweight Champion Francis Ngannou was reminded of his first Stipe Miocic fight when he looked at Ciryl Gane midway through UFC 270.

Ngannou made his first title defense against Gane in the UFC 270 main event, winning via unanimous decision. It wasn’t the striking showcase everyone expected, but the champion demonstrated his improved grappling skills to get the victory over Gane.

The first two rounds weren’t going in Ngannou’s favor according to two of the UFC 270 judges. However, he was able to turn the tide in Rounds 3 through 5 and control the path to retaining his belt.

Ngannou’s journey to the UFC title was anything but easy. After a difficult loss to Miocic at UFC 220, he would lose a lackluster bout against Derrick Lewis before going on his current six-fight winning streak.

Ngannou has alluded to his UFC 220 fight with Miocic as a completely different version of who he is today. During a recent interview with Ariel Helwani, he revealed that Gane’s body language at the end of Round 3 reminded him of his former self.

“By the end of the round, I looked at him, I saw me when I fought Stipe the first time,” Ngannou said. “I’m like, ‘This guy is done.’ Yeah, and he wasn’t even able to listen to his coach. I was listening to his corner talk to him and he wasn’t reacting. I’m like, he’s done. That is exactly me when I fought Stipe the first time. That’s the moment that I knew I won the fight, at the end of the third round… He was broken, I could tell. I look him in his eyes and was like it’s a done deal.”

Ngannou went through quite the buildup to UFC 270. He’s been dealing with tense contract talks with UFC President Dana White and the promotion, and negotiations have seemingly hit a dead end.

This was further supported when White declined to put the belt around Ngannou as the official decision was read at UFC 270. White also was notably absent from post-fight media obligations, though White has since claimed external issues prevented him from carrying out these activities.

When asked by Helwani to forecast his future with the promotion, Ngannou remained cautiously optimistic. There are tears in the relationship with the UFC that need repair, and Ngannou seems hell-bent on getting the promotion back on his side.

What are your takeaways from Francis Ngannou vs. Ciryl Gane? 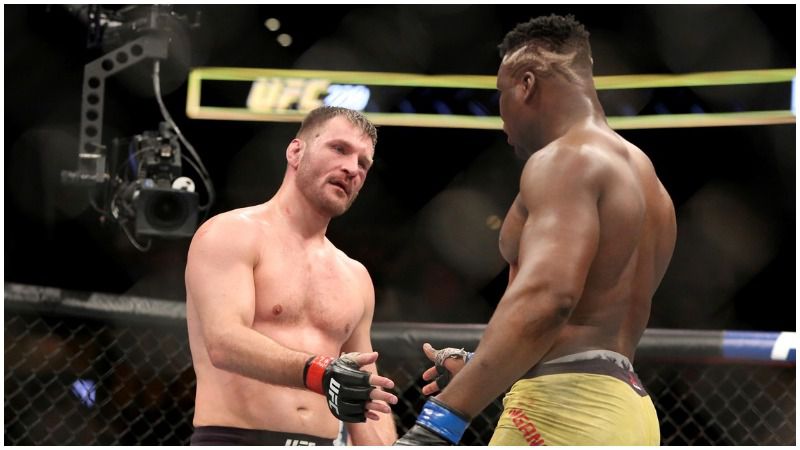