Francis Ngannou has explained his viral backstage snub of former training partner Ciryl Gane, and he says there’s more than what meets the eye.

One of the stories that came out of UFC 268 had nothing to do with all the in-cage action. A backstage non-encounter between Francis Ngannou and Ciryl Gane widely made the rounds over the internet, with Ngannou shown walking straight past Gane without even a trace of acknowledgment.

Gane himself was flabbergasted by the whole scene, summing his thoughts up in three short words: “Why? Just why?”

In an interview with Daniel Cormier that dropped Wednesday, Ngannou explained why. And as it happens, it wasn’t a snub of Ciryl Gane after all, but rather one of the other figures seen in the video, Ngannou’s ex-head coach and Gane’s current coach, Fernand Lopez.

“Yeah, I didn’t want to say hi. I feel like I didn’t want to say hi for my sake,” Ngannou said. “Well, it’s been a couple years now that [Lopez is] out there picking on me. I mean, like, yeah, I want to be nice, but when I saw him in that position, I [had] a few thoughts. I’m like, ‘OK, should I say hi? Then, I’m like, ‘I don’t know. I might go closer and say hi and somehow you will hear that I said [something I didn’t say].

“Getting close to him was giving an opportunity for him—not only the fact that I’m sure that he didn’t need me to say hi, but it was giving him an opportunity to again say something that I didn’t say. So I’d rather stay in the distance. So it was good that the camera was there. They couldn’t say, ‘Francis said this,’ right? That was for my sake. I needed that. No, not like Francis say this. Maybe you can stand there. If we have to talk, we talk here. But once again, I don’t have a need—it’s not like we’re friendly. He’s attacking me all the time. Like, I can’t do that.”

Ngannou’s concerns may be warranted here, as Lopez has certainly made many accusations against his former fighter as of late. Among them, he claimed that Ngannou nudged the UFC not to sign Ciryl Gane, that Ngannou still owes gym fees to him, and he also stated that he’d rather coach Gane for free than work with Ngannou again for $100,000.

Ngannou also clarified that he has no issues at all with Gane. And as for Gane’s confusion on the whole matter goes, Ngannou says he would have had the same reaction if he were in Gane’s shoes. That said, had it only been Gane standing there, Ngannou assures that we would have seen a much less frigid video.

“I would have been confused to,” Ngannou said. “Because if I walk by Gane, I would say hi. If it’s just him, I would say ‘Hi, what’s up…’

“And if I say hi to them without saying hi to Fernand and then they respond, I think that might cause them a problem as well. So it just was a very confusing situation.”

After explaining #Snubgate, Ngannou wold then make a bombshell accusation. The UFC heavyweight champion says he is convinced the UFC set it up so that he would cross paths with Gane and Lopez. When an incredulous Daniel Cormier nearly refused to hear Ngannou’s reasoning out of sheer disbelief, Ngannou insisted that he present his evidence.

“There was this lady taking us to our seat. And she was bringing us to this section, and then they talked to her over the radio. And then [she said], ‘Oh, sorry, I’m wrong.’ So she turned around and we get back [and Gane and Lopez are standing right there]. I mean, tell me how this can be a coincidence…

“And when you look, by the time I come from the corner, the guy was ready with his camera. Like, if you watch that video, he was on me by the time I turned around the corner and just zooming on me like, ‘Oh, he’s there! He’s coming!’ [makes music sound] Like this movie scene! He was there waiting for [me]! It’s not like you see somebody and you’re like, ‘Oh, [it’s] them, let me film.’ Like, come on. His camera wasn’t just there ready to film something if ever something happened. No, he’s waiting.”

Backstage drama and conspiracy theories aside, arguably the two very best heavyweights in the world will compete at UFC 270 on January 22. This heavyweight blockbuster will be a title unification bout between Ngannou and Gane.

Yesterday, the UFC dropped the official poster for the event, which you can peep below.

Do you believe the UFC set up the backstage encounter between Francis Ngannou and Ciryl Gane? 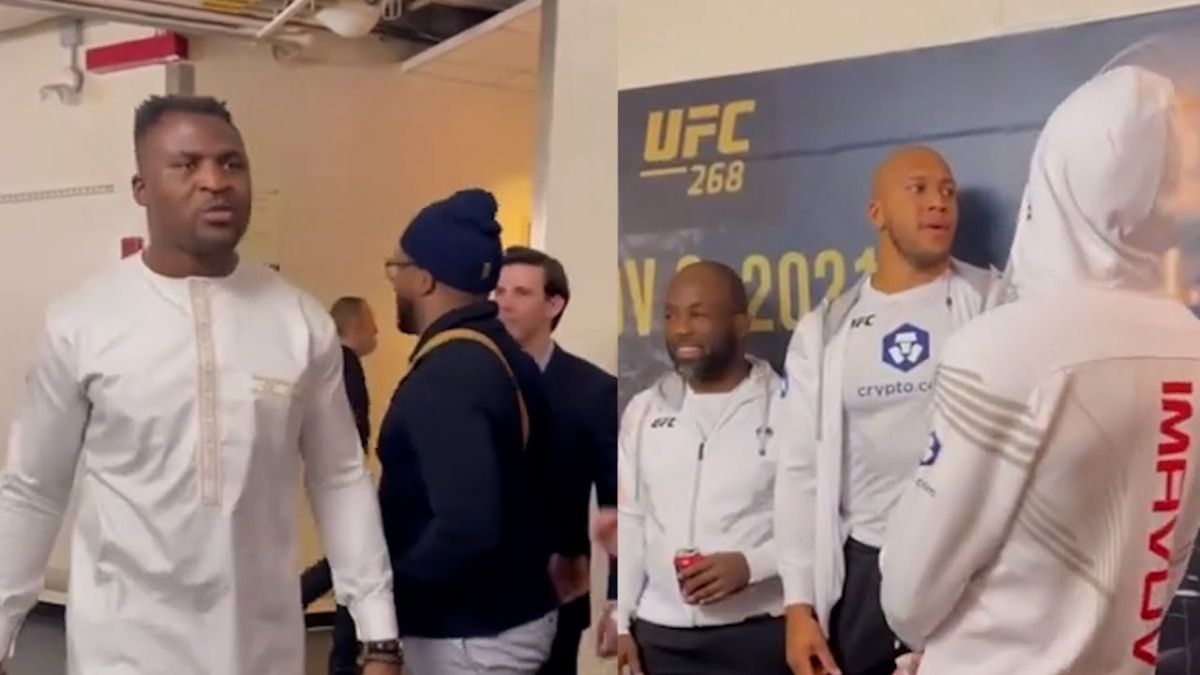