Murphy Feels Valentina Shevchenko’s Opponents All Made One Mistake
published on September 23, 2021
curated and posted by BRWLRZ Team

Lauren Murphy believes all of Valentina Shevchenko‘s fallen victims have one thing in common.

On Sept. 25, Murphy will challenge Shevchenko for the UFC Women’s Flyweight Championship. The title bout will serve as the co-main event of UFC 266. This will be Shevchenko’s sixth title defense.

MMA News’ James Lynch spoke to Murphy ahead of the fight. The title challenger shared the one common mistake that she believes Shevchenko’s opponents have made.

“I think some people end up fighting her reputation instead of fighting the person in front of them, and that can be really detrimental. I’ve definitely fallen prey to that before. Like when I fought Sara McMann, I was like, ‘Oh, my God, I’m fighting Sara McMann.’ Instead of just focusing on the moment and kind of owning the moment, I got really caught up in the name of who I was fighting. And so I’m glad I made those mistakes before now so that hopefully I don’t repeat them,” Murphy said with a laugh.

That fight with Sara McMann took place back in 2014. Going into that bout, Murphy was undefeated with a record of 8-0. Murphy ended up suffering the first defeat of her pro MMA career via split decision.

As far as a prediction goes for her showdown with “Bullet,” Murphy kept it simple.

“Man, I would love to make a prediction, but I don’t know. I just know I’m gonna get my hand raised at the end of it, and it’s gonna be ‘And New.’”

UFC 266 will be headlined by a featherweight title clash between champion Alex Volkanovski and Brian Ortega. Also scheduled for the card will be the return of Nick Diaz, who will meet Robbie Lawler in a rematch. 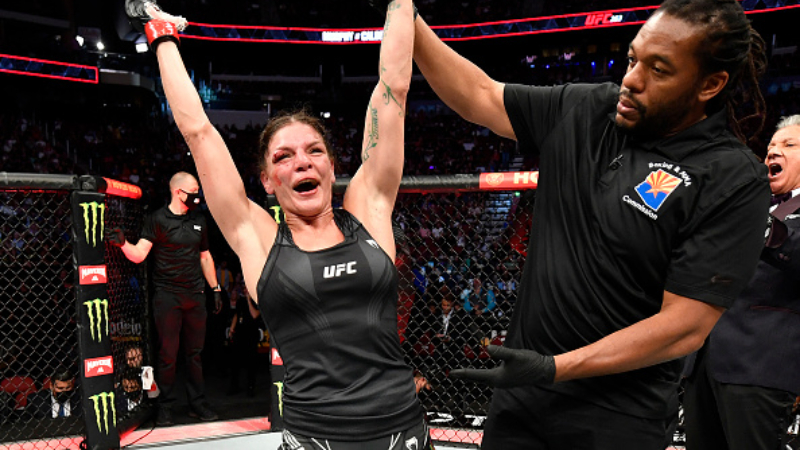