UFC welterweight Mickey Gall is confident he can take a step closer towards the 170-pound rankings when he faces Alex Morono this weekend.

Since victories over Mike Jackson, CM Punk, and Sage Northcutt got him off to a 3-0 start in the UFC and established himself as one of the most promising prospects in the promotion, Gall has been unable to carry forward any momentum, trading wins and losses since 2017.

In-between victories over George Sullivan and Salim Touahri, the 29-year-old fell to setbacks against Randy Brown, Diego Sanchez, and Mike Perry. Having rebounded from his defeat to “Platinum” with an impressive submission win against Jordan Williams at UFC Vegas 32 in July, Gall will be looking to close 2021 out with a second consecutive triumph, something he hasn’t managed in five years.

If he’s to succeed in doing so, he’ll have to get past welterweight mainstay Morono at UFC Vegas 44 this Saturday. Ahead of their prelim clash, Gall spoke exclusively to MMA News’ James Lynch.

Discussing his 10th opponent in the UFC, Gall admitted that Morono, who’s fought 14 times since 2016 and boasts wins over Donald Cerrone and Max Griffin, is an unassuming threat, but a dangerous foe nonetheless. Despite that, Gall believes he boasts the superior killer instinct.

“He’s a tough dude, man. He’s very, he’s scrappy, he’s tough. I knew I had to come correct to this fight, and I did that… He’s one of those guys like, he doesn’t look like a killer, but he’s definitely a killer. So am I. I believe I’m a badder killer and a bigger killer. I feel real good about the fight.”

When asked for his prediction, Gall told MMA News he’s capable of having his hand raised through multiple routes, be it knockout or submission. Either way, he expects to deal damage come December 4.

“I see me bashing my bones into his skull; cracking him with big, heavy shots, concussive blows. I could submit him, I could knock him out. Wherever the fight goes, I’m just gonna go in there and be me; just do what I do.”

Despite coming up against an experienced veteran who’s riding a two-fight winning streak, Mickey Gall is clearly confident he’ll get the job done on fight night. The 29-year-old’s self-belief derives from a positive fight camp, which he described as the “best” he’s had in the UFC.

“Fight camp went well. Even if it didn’t, I’d probably tell you the same thing. But it really was, I think, my best one. I think I was able to peak, and like, do everything right. It’s just been great. My team around me; it’s been a homegrown like, good camp… We’ve been putting in some good, hard work, and I’m really proud of what we did as a team. The way I feel now is beautiful, everything’s great.”

Gall vs. Morono will be the second fight on the UFC Vegas 44 card, following a bantamweight contest between Louis Smolka and Vince Morales.

Having missed out on a bonus for his first-round stoppage win last time out, Gall will be hoping to leave the Apex with an extra $50,000. But with the likes of Rob Font, Jose Aldo, Rafael Fiziev, Alonzo Menifield, Manel Kape, Brendan Allen, and Jimmy Crute all in action, he’ll have to deliver a special performance versus Morono to make the bonus list.

Who do you think will have their hand raised at UFC Vegas 44, Mickey Gall or Alex Morono? 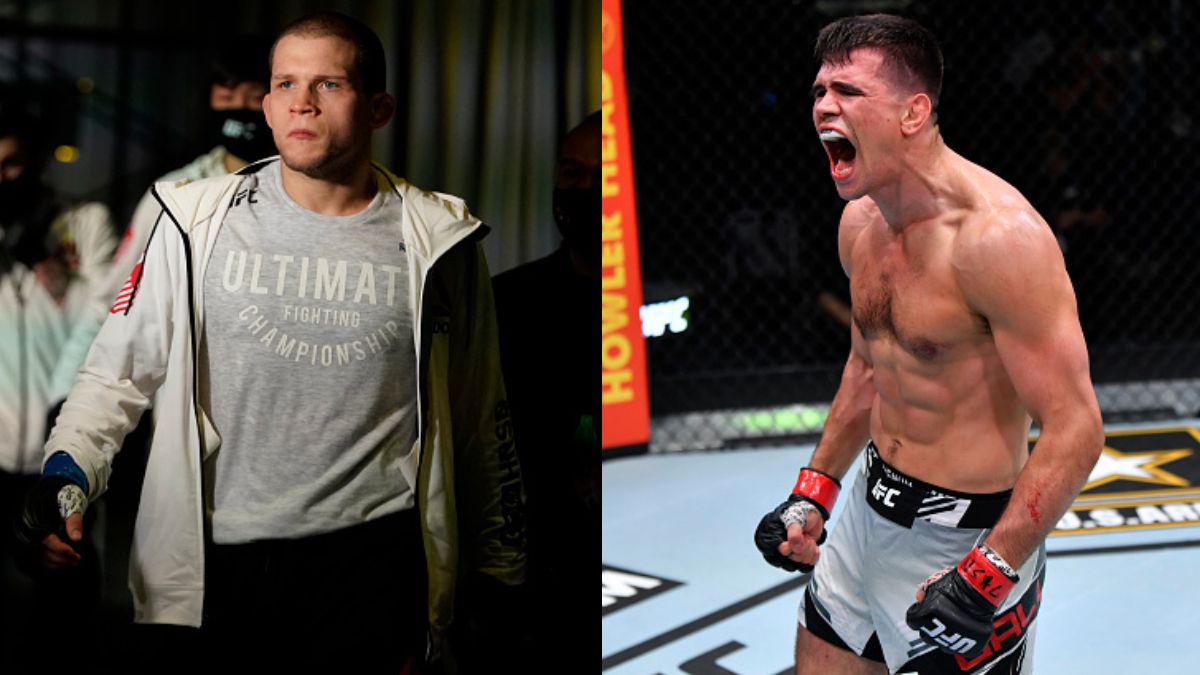