Former UFC Middleweight Champion Michael Bisping has suggested that Amanda Nunes and Valentina Shevchenko should fight for the female version of the ‘BMF’ title.

Shevchenko, the current UFC Women’s Flyweight Champion, was in action last weekend at UFC 266. In the pay-per-view’s co-main event, “Bullet” made her sixth successful title defense, placing her at the top of the list for current UFC champions when it comes to triumphant retentions.

The dominant 125-pound queen breezed past Lauren Murphy at the event. After a fairly lacklustre three rounds of action, which largely saw “Lucky” unable to mount any offense, Shevchenko turned up the heat and let her weapons go. With some brutal elbows and punches, the Kyrgyzstani star finished Murphy in the fourth frame.

After yet another dominant display, the momentum behind calls for a trilogy fight with featherweight and bantamweight champ Nunes has picked up yet again. Given the fact she’s brushed aside the challenges of Jessica Eye, Liz Carmouche, Katlyn Chookagian, Jennifer Maia, and Jéssica Andrade, many have suggested the next logical challenge for Shevchenko is a third attempt at defeating the “Lioness.”

On a recent episode of his Believe You Me podcast, Bisping showed his support for a trilogy bout between Nunes and Shevchenko. However, he did pitch a few changes from their first two clashes, notably the creation of a female ‘BMF’ belt.

“I say they do a third rematch, but it doesn’t have to be Shevchenko going up to 135 for the belt. Fuck that. Meet in the middle, it’s the two best ladies on the planet, 130 pounds, Shevchenko goes up five [pounds], Nunes comes down five to meet at 130 to fight not for the title…they do a female BMF version of the belt. Who really is the baddest motherfucker in terms of females on the planet? 130-pound catchweight. Boom. That’s what they should do and that makes it fair.” (h/t Sportskeeda)

The original ‘BMF’ title was created for Jorge Masvidal and Nate Diaz‘s fight at UFC 244. After an impressive display, “Gamebred” took home the ceremonial belt and has often been seen sporting it at UFC events since.

Shevchenko and Nunes first fought at UFC 196 in 2016. The Brazilian had her hand raised after securing a comfortable unanimous decision win. “Bullet” offered a lot more in their rematch a year-and-a-half later. In the UFC 215 main event, Shevchenko came close to dethroning the 135-pound champ, and even after the scorecards condemned her to a split decision defeat, the Bishkek-born star revealed her dismay at the judges’ take on the fight. Given her performances and flyweight title reign since the rematch, many have suggested now is the time to match the two greats against each other again.

Having said that she’s ready for the trilogy prior to UFC 266, it stands to reason another dominant victory would only have made Shevchenko more confident about a potential third meeting in the Octagon with the female roster’s other destructive champion. Should Nunes emerge victorious against Julianna Peña at UFC 269 in December, we could well see these two legends collide once more.

Would you like to see Amanda Nunes and Valentina Shevchenko fight for the female iteration of the ‘BMF’ title? 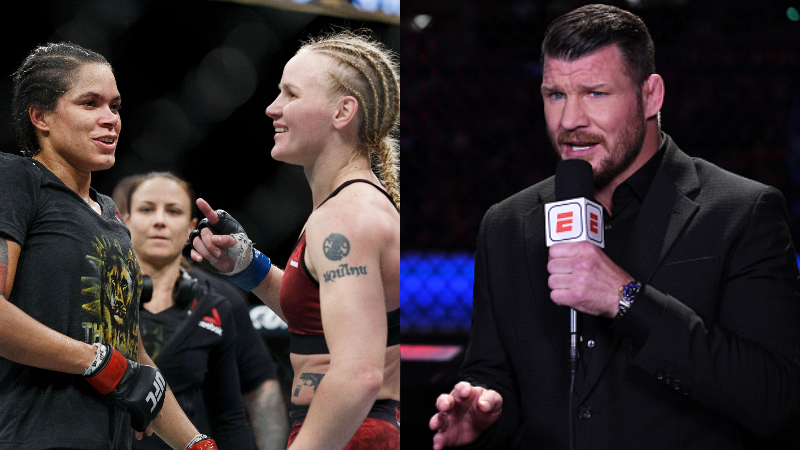