UFC bantamweight Merab Dvalishvili has once again firmly closed the door on a potential clash with his teammate Aljamain Sterling.

Dvalishvili was last in action at UFC Vegas 25 in May. Against Cody Stamann, the Georgian extended his winning streak to six, and in doing so, ascended to #11 in the 135-pound rankings.

With unanimous decision wins over Stamann, John Dodson, Gustavo Lopez, and Casey Kenney since the beginning of 2020, Dvalishvili has established himself as a real contender and secured a top-10 opponent in his next outing. “The Machine” will meet former title challenger Marlon Moraes at UFC 266 this weekend.

Despite being on a two-fight losing skid, Moraes will still represent a step up for Dvalishvili, and a victory would see the 30-year-old join the division’s elites. The Brazilian boasts wins over José Aldo, Raphael Assunção, Jimmie Rivera, and the current UFC Bantamweight Champion.

While Dvalishvili will be hoping to get the better of Moraes inside the Octagon at Saturday’s pay-per-view, he’s more than happy not achieving one thing that “Magic” has on his record; a victory over Aljamain Sterling.

Both “Funk Master” and Dvalishvili train at the Serra-Longo Fight Team. Whilst many teammates eventually face each other inside the Octagon, the Georgian has rejected the idea of fighting Sterling. That’s despite the 32-year-old currently occupying his division’s throne.

Speaking during his UFC 266 media day interview, the Georgian looked to put to bed any talk of a fight with his friend and training partner.

While Dvalishvili hopes to climb closer to the bantamweight mountaintop, the man currently there will be hoping to further legitimize his spot in his first title defense. Having won the belt via a disqualification, many are yet to accept Sterling as the true 135-pound king.

At UFC 267, the New York native will be looking to put an exclamation mark on his champion status when he rematches Petr Yan. Since losing his belt due to an illegal knee, the Russian has gone back-and-forth with the champ on social media. He’ll hope to reclaim his place at the top in Abu Dhabi on October 30.

Who do you think would win if Merab Dvalishvili and Aljamain Sterling faced each other? 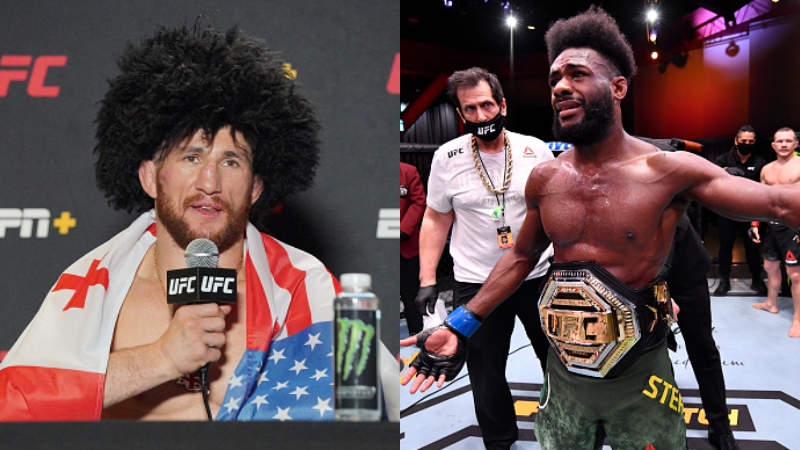