Masvidal Wants Nick Diaz To Return At 100% Or Not At All
published on October 4, 2021
curated and posted by BRWLRZ Team

Jorge Masvidal doesn’t believe fans got the Nick Diaz they are accustomed to at UFC 266.

Masvidal’s sentiment echoes that of many MMA fans who witnessed a perceivably soft-looking Diaz prematurely end his bout with Robbie Lawler early in the third round. It was the Stockton-native’s first fight in over six years, and while he showed glimpses of his former self, was notably overwhelmed by the constant forward-moving pressure of Lawler.

Some, however, praised Diaz for his performance. Joe Rogan commented that the 38-year-old “didn’t do that bad for a guy that was out six (years)” while UFC President Dana White said, “Diaz looked incredible, considering he hasn’t fought in (six) years.” Conor McGregor was also suitably impressed.

Masvidal, who famously bested Nate Diaz to win the inaugural “Bad Motherf*cker” belt in 2019, had recently been angling for a fight with his elder brother. Prior to UFC 266, “Gamebred” said the matchup with Nick would “be a blessing” and one that he “always wanted to do.”

But after witnessing Diaz’s lackluster performance at UFC 266, it appears Masvidal’s thoughts have shifted from fighting the Stockton-native, to hoping he returns to his former self.Speaking to MMA Uncensored, Masvidal shared his thoughts on Diaz’s UFC 266 performance, lamenting what seemed to him a depleted fighter.

“I’ve watched Nick fight a ton,” said Masvidal (h/t Sportskeeda). I like Nick Diaz as an athlete, as a fighter… I don’t know where he’s coming from. I don’t know if he needed the money, because like (Dean Toole) said, it didn’t look like he wanted to be that way. It didn’t look like he wanted to be there in fights. So maybe he’s coming from a different place that I don’t understand when you got to get a paycheck. God bless him. But as far as Nick Diaz that we’re used to seeing is concerned, he’s not the same guy.”

Jorge Masvidal is clearly a Nick Diaz fan, and as such, he expressed hope that the 38-year-old will only return to the Octagon once he’s in top shape.

“Obviously, I would want to see him come back 100 percent healthy, 100 percent in shape, ready to do that for three rounds or five rounds, whatever the contract dictates… I would just like to see him back in there but with a full tank of gas. If not, I don’t want to see him tarnish his legacy because he does have a great legacy.”

What do you think? Do you agree with Jorge Masvidal’s comments? 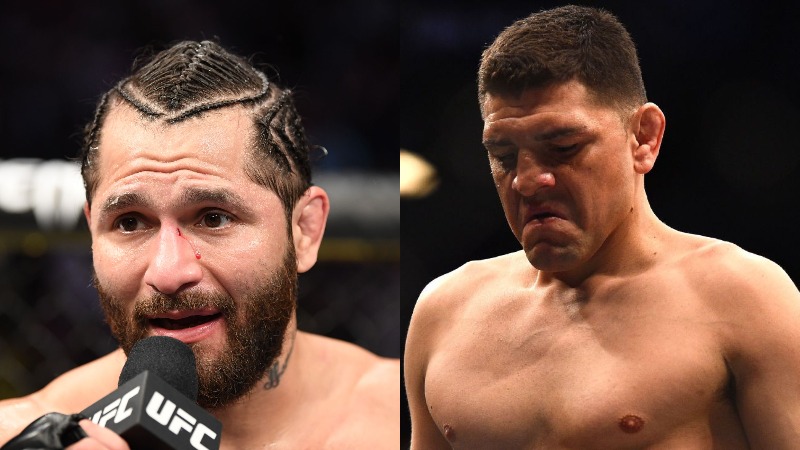