Dern remains tied with Yan Xiaonan for the #4 ranking at strawweight. Rodriguez looks to earn top-five recognition with a win this weekend to advance her claim toward UFC gold. Rodriguez’s only loss in the UFC came to Carla Esparza in a razor-close split-decision loss on Fight Island. As her only defeat in the UFC, Rodriguez has proven time after time that her striking is her biggest asset in MMA. With six victories by way of TKO/knockout, Rodriguez is a nightmare to deal with if the fight remains standing.

Dern, a renowned Jui-Jitsu specialist has made her mark in the UFC. Of Dern’s six UFC victories, four have come by submission. Ever since having a child, it appears Dern has a renewed desire to become champion. Since Dern’s loss to Amanda Ribas in 2019, the Brazilian-American has fired off four wins in a row. En route to Dern’s four-fight winning streak, the 28-year-old looked outstanding against her latest opponent Nina Nunes. The submission took under one round to secure, and it marked her second arm-bar victory in the UFC.

In September, Dern revealed that Esparza refused to accept a fight with her. Nevertheless, with Rodriguez as her target, the grappling ace will look to pull off a big win at UFC Vegas 39. The fight holds special significance as Dern is well aware that if she pulls off an emphatic victory, she could be next to challenge for strawweight gold.

In her performance against Virna Jandiroba, not only did Dern demonstrate toughness, but she showed how she responds when she is unable to get the fight to the canvas. Following a dominant third round, clearly Dern has made advancements with her striking and cardio.

During the fight, Dern was unable to get Jandiroba to the ground. She did, however, manage to pepper her opponent with constant knees in the clinch through the course of the fight. Despite injuring her nose, Dern powered through the blood and pushed the pace in the final round. After being awarded the unanimous decision victory, many were impressed to see Dern pick up a win without utilizing her elite Jiu-Jitsu.

With her submission attempt percentage above two per fifteen minutes, if Dern gets the fight grounded, the danger factor explodes. Despite her grappling prowess, her successful takedowns per fifteen minutes indicate that she scores less than one takedown in each three-round fight. On the other hand, Rodriguez is sporting a respectable 62% takedown defense and primarily does all of her handiwork while standing.

Rodriguez has looked incredible inside the Octagon. With signature wins against Amanda Ribas and Michelle Waterson, the Brazilian’s strength of schedule is downright impressive. Even though she took her only professional loss to Esparza back in July of 2020, many actually thought Rodriguez won the fight. After the scorecards were read, it was clear at the very least that Rodriguez inflicted more damage.

Rodriguez is on the cusp of a top-five ranking if she can utilize her boxing and pick Dern apart. Rose Namajunas is set to defend her title against Weili Zhang on Nov. 6 in the famed Madison Square Garden Venue in New York City, NY. Before the Nov. strawweight title fight, all eyes are on these two at UFC Vegas 39. One fighter will emerge as a fresh contender for the winner at UFC 268 going down next month–unless, of course, Carla Esparza has anything to say about that.

Do you think Mackenzie Dern can earn a title shot with a dominant win against Marina Rodriguez? 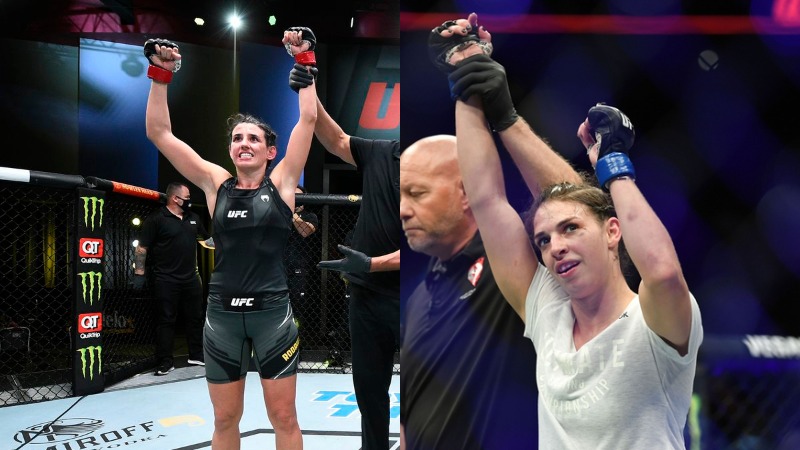