Khamzat Chimaev: The Gilbert Burns Fight Comes Down To His Manager
published on December 1, 2021
curated and posted by BRWLRZ Team

UFC welterweight Khamzat Chimaev has addressed rumors he could fight Gilbert Burns next, suggesting whether or not the matchup comes together is down to the Brazilian’s manager Ali Abdelaziz.

The fact that we’re already in a position to discuss Chimaev and Burns in the same breath is remarkable. It’s a testament to the 27-year-old’s rapid and brutal rise up the UFC ranks, something he’s achieved in just over a year in the promotion.

Last summer, “Borz” arrived in style, picking up two wins over John Phillips and Rhys McKee in the space of just 10 days on Fight Island. A couple of months later, he boosted his UFC record to 3-0 with a 17-second knockout of middleweight veteran Gerald Meerschaert.

After being sidelined for over a year due to COVID-19 complications, something which led to a booking against top-three contender Leon Edwards collapsing, many wondered whether Chimaev could pick up where he left off in his return. Against Li Jingliang at UFC 267, he did that and more.

The Chechen-born Swede jumped into the rankings with a memorable first-round submission victory in which he rendered “The Leech” unconscious with a rear-naked choke.

Since his successful comeback, Khamzat Chimaev’s future has been one of the most talked about topics in the UFC. While some even called for “Borz” to be immediately accelerated to the top to challenge Kamaru Usman, UFC President Dana White suggested he needed “one or two” more wins against high-ranked contenders to earn a title shot.

It appears Chimaev could have his chance to stake his claim for a championship opportunity in January. Recent reports suggested the promotion was targeting a matchup between the newly-arrived contender and former title challenger Gilbert Burns.

During a recent appearance on the MMA Hustle podcast, Chimaev was asked about the rumored clash, which would likely serve as a title eliminator. After expressing interest in facing “Durinho,” the 27-year-old suggested it’s down to Burns’ manager Ali Abdelaziz, who Chimaev parted ways with earlier this year.

“I don’t really know, but I’d love to fight (Burns) and we’ll see. If (his) manager Ali (Abdelaziz) says. The fighter himself, I don’t think he will refuse. The manager decides. Ali understands who I am and who he is… It seems that’s what Ali is trying to tell him, that it’s not advantageous for him. I’m number 10 and he’s number three or two. And whether (it’s) advantageous or not, I’ll get to him and to everyone anyway.” (Via translation)

If the Dominance MMA CEO does give the green light for his man to enter the Octagon with one of his former fighters, Chimaev doesn’t believe he’ll have an issue dispatching the Brazilian. In fact, the #11-ranked contender went as far as to agree with one of the podcast hosts who claimed the matchup would be easy for him.

“Yeah, of course. He’s small, not big. I’ll out-box him… No way he could go low on me. A jiu-jitsu fighter, there’s no way. I don’t think he will get me on the mat. When was the last time he managed that? Fighting is different. Jiu-jitsu is on the floor and you still have to get there.”

Having fallen short of the gold at UFC 258 earlier this year, Burns would be looking to secure a second crack at dethroning Usman by halting the surge of Chimaev if the booking comes together.

After rebounding against Stephen Thompson at UFC 264, “Durinho” has made it clear he’s ready to face anyone who can get him back to the title, expect for teammate Vicente Luque, that is.

How do you think a fight between Gilbert Burns and Khamzat Chimaev would play out? 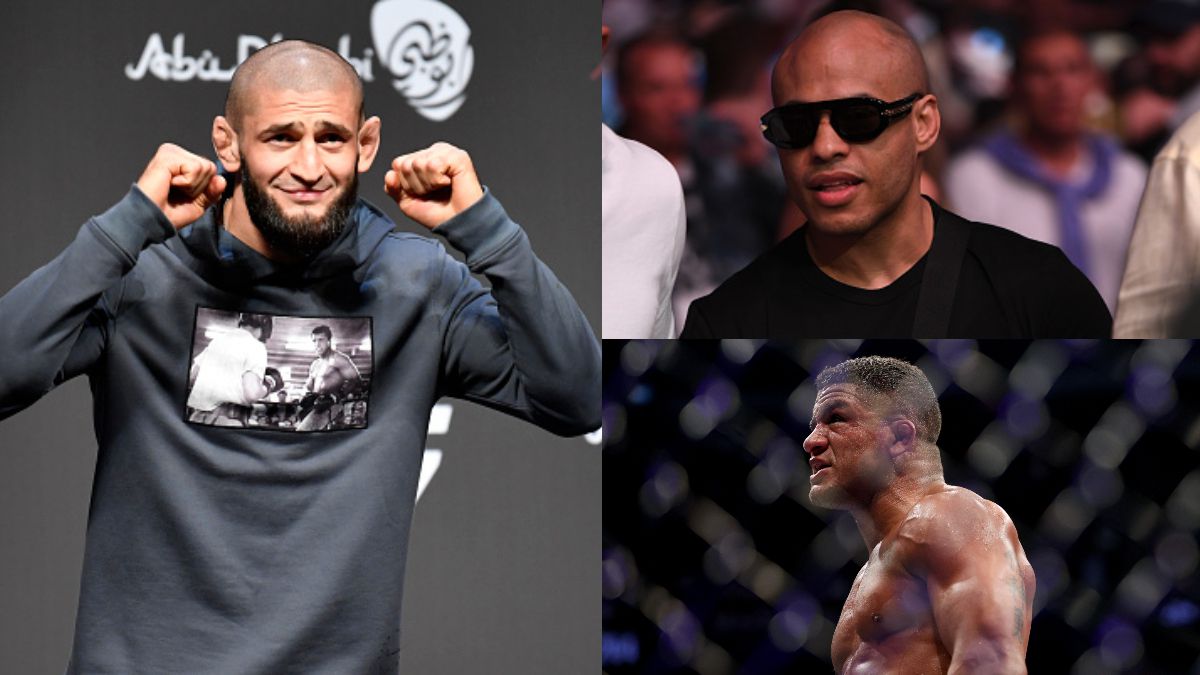