UFC lightweight champion Khabib Nurmagomedov does not believe Tony Ferguson will ever be the same fighter again after losing to Justin Gaethje at UFC 249.

It has been years that fans have been begging and longing to see a fight between Khabib Nurmagomedov and Tony Ferguson. The latest near collision between the two was at UFC 249, where Khabib was set to defend his lightweight title against Ferguson. Unfortunately, due to the COVID-19 pandemic and the traveling complications that arouse for the champion, Ferguson had to fight Justin Gaethje instead. Gaethje would go on to win in convincing fashion, TKOing Tony Ferguson in the fifth round. As Khabib watched the bout that was meant for him from the comfort of his home, he came to the realization that he just witnessed the end of the Tony Ferguson that most fans have regarded to be the most fitting rival for him.

“Nobody can be same long time. Nobody…no Tony Ferguson, no Khabib, nobody,” Khabib told ESPN of Ferguson. “And one day, someone gonna beat you or something gonna happen. God don’t give to nobody power, reaction, mental, everything in one level always. One day, it’s gonna go down, and his day come.

“And I understand Tony Ferguson’s time is finished. Now, he gonna come back, someone gonna beat him again, I believe. Because when you take damage like this, you never gonna be same … never, ever, even if you’re Tony Ferguson.”

Khabib did have a suggestion for Tony Ferguson to prove him wrong and also earn a potential title shot: by stepping up to fight childhood friend and longtime training partner of Nurmagomedov: Islam Makhachev.

“Right now, he have choice. He can come and jump to Fight Island and fight with Islam Makhachev,” Khabib said. “He have six-win streak. He’s almost top 10. He have name. And why not? Why not? Why he don’t want to take this fight? UFC gonna give him good money. Ali Abdelaziz gonna give him $100,000 plus $100,000. And very good chance: fight with Islam Makhachev, and after that, maybe he can fight for the title if he win. But I think his time is finished,” Khabib concluded with a chuckle.

At present moment, Islam Makhachev is still in pursuit of a UFC 254 opponent after Rafael dos Anjos withdrew from their scheduled fight due to contracting the coronavirus, and Tony Ferguson is without a fight booked after negotiations for fights against Dustin Poirier and Michael Chandler fell through. With UFC 254 being less than two weeks away, Ferguson would have to act fast if he wants to step in to fight Makhachev and potentially silence Khabib and any of his other doubters with a resounding victory.

Do you agree with Khabib Nurmagomedov? Will Tony Ferguson never be the same again after his loss to Justin Gaethje at UFC 249? 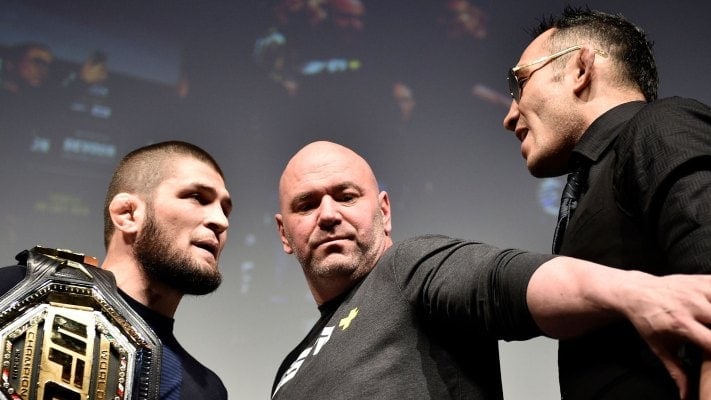