Khabib has a strong idea of where the lightweight championship is headed after the title is officially vacated.

Khabib has now been unofficially retired for over two full months ever since UFC 254 when he announced that his bout against Justin Gaethje would be his last. But despite the retirement, Nurmagomedov remains listed as the reigning lightweight champion and has yet to vacate or be stripped of the title. In a recent interview with Match TV, Khabib took a moment to reflect on what the lightweight division has meant for the UFC in 2020 and what the future holds for its championship.

“Lightweight has always been very competitive,” Khabib said, as translated by RT Sport. “All major UFC events in 2020 were built around lightweight. First [it was] Conor’s comeback, then Gaethje against Ferguson. Then Poirier’s comeback. Then my fight with Gaethje. This weight [division] has always been interesting and competitive.”

“Top three [lightweight] fighters right now? Poirier, McGregor and [Islam] Makhachev. He is not in the top five yet, but those are the best fighters. My belt will be taken by the winner of Dustin and Conor.”

Khabib’s statement regarding the ramifications of the UFC 257 main event is one of the more direct comments Khabib has made about the future vacancy at the top of 155 but not the first connected to the event’s headliners. He has also recently predicted that Dustin Poirier is the man most likely to become the next UFC lightweight champion. That said, it would seem Khabib expects Poirier to defeat Conor McGregor in the UFC 257 main event and that the title would have been vacated before the fight takes place, but we will not know for certain until Khabib meets with Dana White soon.

“Dana and I are in touch and did not discuss the moment with the vacant belt,” he said. “This is because they want me to continue…I don’t blame them and their desire is understandable. They persuade, I will not hide, but this is not surprising.

“And so yes, I repeat: there are conditions and offers. In a couple of weeks, Dana and I will discuss all the points. I would not like to have the likelihood of my return.”

What are your thoughts on Khabib’s comments ahead of UFC 257? 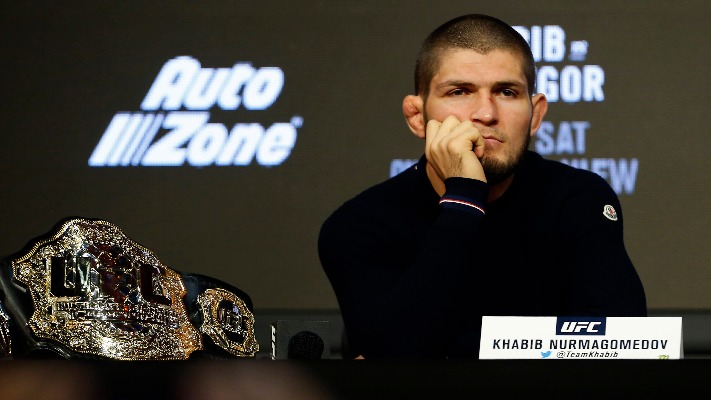