Reigning UFC lightweight champion Khabib Nurmagomedov is not a fan of how Dustin Poirier is handling his fight negotiations with Conor McGregor.

It seems to only be a matter of time before Conor McGregor’s and Dustin Poirier’s verbally agreed-upon fight for UFC 257 becomes official. And thus far, all public indications are that the negotiations for the bout took place exclusively under Conor McGregor’s terms.

“I don’t understand why Dustin show his weakness,” Khabib told TSN this week. “This is just my opinion. You have to say something, ‘Hey, this is my opinion, too.’ He have to do something, too. Like, OK, they ask him fight, Conor say he gonna donate you money and he say, ‘Oh, yes, yes, yes,” everywhere. But Dustin is lightweight fighter. He’s not welterweight fighter. Why you gonna fight in 170? If you wanna fight for the title next, you have to make 155. Fight in lightweight division.”

Indeed, Nurmagomedov has been clear that if the McGregor/Poirier fight takes place at welterweight instead of lightweight that it would be irrelevant to the lightweight division and that he would have no interest in fighting the winner. Time will tell if Poirier will take that and Khabib’s harsh assessment of his passiveness into consideration.

Khabib Nurmagomedov is busy enough without thinking of how McGregor/Poirier will turn out, as he will be defending his lightweight championship against Justin Gaethje in the main event of UFC 254 this Saturday.

Do you agree with Khabib? Is Dustin Poirier showing weakness in his fight negotiations with Conor McGregor? 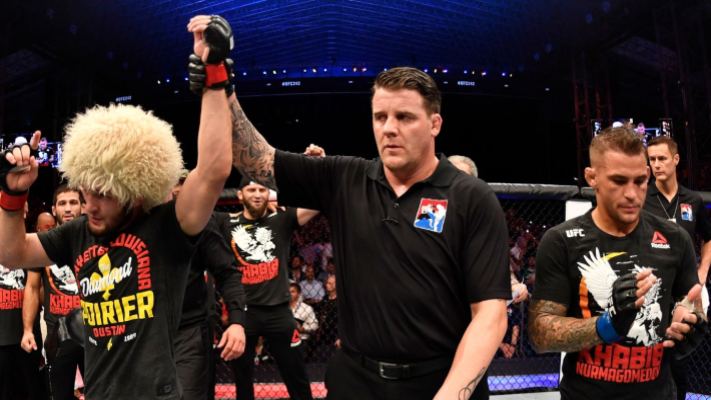