Khabib Nurmagomedov vs. Justin Gaethje delivered in every way possible.

The showdown served as the main event of the UFC 254 pay-per-view event on Saturday (October 24, 2020) from the Flash Forum on Yas Island, Abu Dhabi aka Fight Island

As seen in the fight, Khabib was on point from the get-go. He continued to push the pace and was never out of the face of Gaethje, who did clip him from a few times. The second round saw Khabib lock in a triangle choke for the win.

Nurmagomedov retained the UFC lightweight champion and extended his pro-MMA record to 29-0. After the fight, he announced his retirement from the sport after promising his mother that this would be the last time. He lost his father earlier this year.

Coming into this fight, Khabib had talked about how the magic number in his mind for retirement was 30-0. He was one away from that and he had expressed interest in fighting former UFC middleweight and welterweight champion Georges St-Pierre to fill that role. A fight against Tony Ferguson was also believed to be a possibility for Khabib although some could argue that he needed a win before doing so.

The Legacy of Khabib is unmatched

What an emotional moment after losing his father earlier this year. #ufc254

Until I take that heavily crown, I grant you the spot. 🤙 Enjoy Champ

I’m 100% behind giving @TeamKhabib the #1 P4P ranking! Absolutely earned! Congrats on an AMAZING career. You are an inspiration. Much love. #UFC254 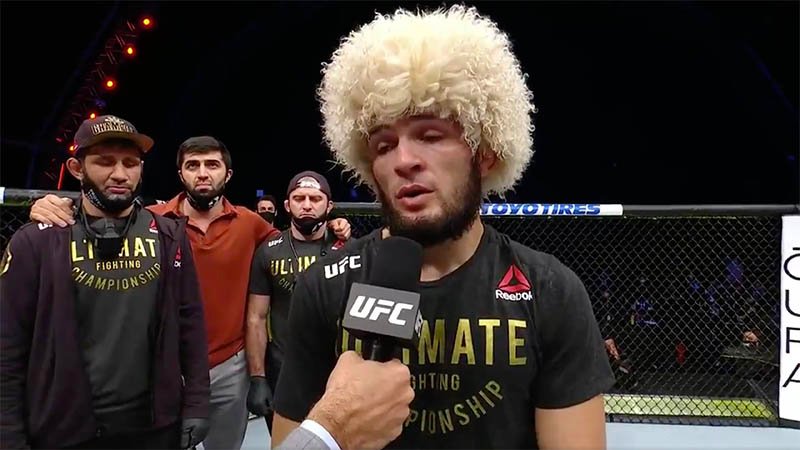