At UFC Fight Island 6, Martinez stepped up on just over a week’s notice to fight the returning Almeida. When he got the call for the fight, it was an immediate yes. For Martinez, he says the Brazilian was someone he grew up watching.

“It feels pretty good and I was excited to fight him,” Martinez said to MMANews after the win. “When he was coming up, I was looking up to him and thought he would be a champ one day. Getting to fight him is pretty awesome.”

Entering the fight, Martinez was the betting underdog which he doesn’t agree with. Part of the reason why he thinks is due to his name value is not where Almeida’s is.

So, for the Factor X product, he hopes the win over Almeida adds some hype to his name. He also thinks the win will get him the credit he deserves.

“I feel like people are sleeping on me and I don’t get the credit I deserve. Beating Almeida and competing on Fight Island I think that ups my profile,” Martinez said. “Just continue to move forward after this win and up the rankings. I was the underdog to a guy who is a guy on a three-year layoff, hopefully, it adds some hype.”

The hope for Jonathan Martinez is to return later this year and back at 135. Even though he looked good at 145 against Almeida, it was only due to the short notice.

So, for Martinez, the goal is to pick up another win in December, and even has an opponent in mind in Luke Sanders. Sanders was supposed to fight his teammate, Chris Gutierrez, but it never came to fruition so Martinez hopes to make the fight happen.

“Maybe a ranked guy, who knows. Really whatever my manager and coach want but I would like in December,” Martinez concluded. “I also want to fight Luke Sanders next just because he was supposed to fight my teammate and it never happened. I think it would be a good fight.” 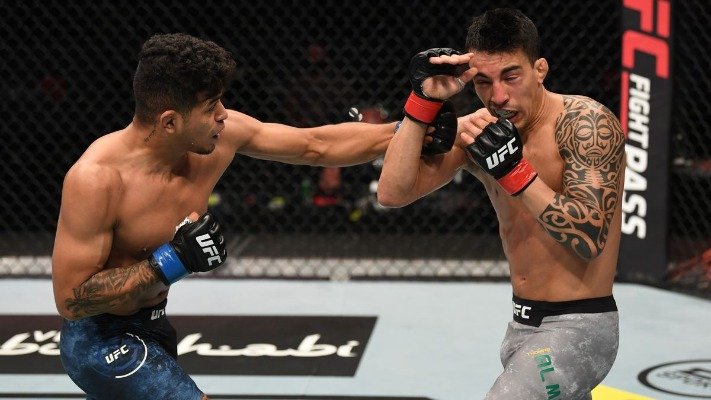