Johnson Responds To Sterling Saying His KO Loss Was “Karma”
published on October 12, 2021
curated and posted by BRWLRZ Team

Demetrious Johnson is not convinced by Sterling’s claim of the mysterious forces being at play in his KO loss to Adriano Moraes.

UFC bantamweight champion Aljamain Sterling captured the title at UFC 259 under less-than-ideal circumstances. After Petr Yan landed an egregious illegal knee, the contest was stopped. Afterward, the title challenger appeared to be concussed and unable to continue. Thus, the “Funk Master” was awarded his first world title despite a face painted with unfulfillment.

Following Sterling’s title win, “Mighty Mouse” was critical of Sterling’s performance and stated that strikes to a downed opponent should be legal. The two have publicly disagreed on the topic. Weeks later, Johnson would get TKO’d by a knee while he was a downed fighter. Due to the irony of the loss, the “Funk Master” would attribute karma to the defeat.

When asked about the ‘karma’ comments from Sterling, the former UFC flyweight champion responded to those notions but also put Aljamain Sterling in the spotlight for his recent performance against Petr Yan. Johnson implies that Sterling should have never let himself get out of position like that.

“I don’t think it was karma. I think if I hadn’t said anything, to begin with, I think the same thing probably would have still happened. The biggest thing is I’m always very unbiased,” Johnson tells MMAMania.com. “I like Aljamain Sterling. I think he’s a great athlete, I great fighter. When I sat there and watched that fight, I’m like — and he can probably vouch for this too — any wrestling coach, when you get pinned or stacked or anything like that, they’ll say, ‘You shouldn’t have been there in the first place.’

“So when I watched that fight, Aljamain Sterling is such a gifted athlete and he’s so skillful. But it’s like, why would you put yourself there in the first place? He said, ‘I felt I was in a safe place.’ If I was coaching him I would tell him, ‘Dog, we don’t rely on you to be there for a safe spot. Johnson said. You get back to your feet, you pull guard, you have great grappling. Let’s put ourselves somewhere else.’ Granted, f—king homeboy Petr Yan kneed him, right?”

Johnson believes that putting your hands down on the canvas can be perceived as stalling in a fight. The former 125-pound king maintains Sterling’s hand placement was on purpose because he saw the momentum of the fight shifting.

“All my talking comes from my coach. He has always said that,” the former UFC Flyweight champion asserts. “There are times in fights I fought, such as John Dodson, where they did the exact same thing. He was putting his hands down on the ground the first time we fought and I couldn’t knee him in the face. Johnson said. And he did it on purpose. My coach said how is this even a fight? If a person puts his hands on the ground and stops the momentum of the way the fight’s going, that doesn’t make sense to me.

“That’s why I said what I said. Aljamain Sterling was on his knees and he was stopping the progression of the fight. Petr Yan had to stop and think about the next shot he was going to throw. That’s where it came from. For him to say it was karma — I don’t believe in karma. I’m a good person, I feel… If he does it again, I’ll say the same f—king thing again.”

With Johnson’s move to One Championship, it’s doubtful we could ever see this disagreement turn into a mega fight. In the meantime, Johnson is scheduled for a wild mixed-rules MMA contest with Rodtang Jitmuangnon set to go down on Dec. 5.

Do you believe Demetrious Johnson’s loss to Aljamain Sterling was karma? 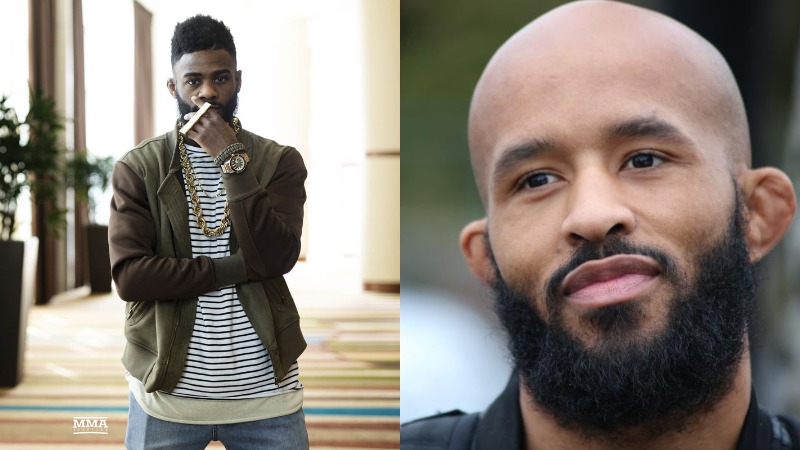